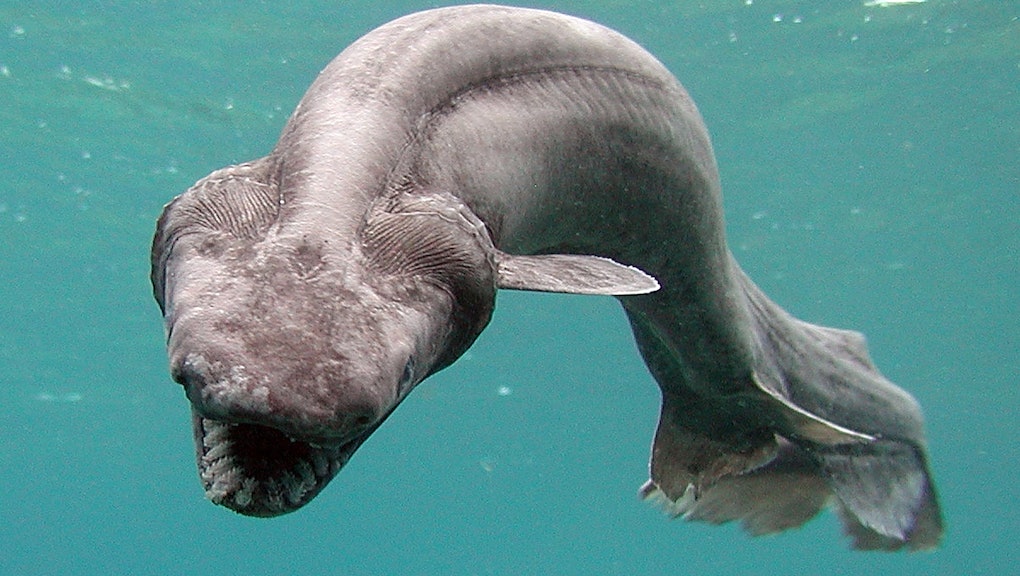 A 300-toothed frilled shark with "a face fitting of a sea monster" was caught off the waters of Australia by a fishing trawler in December, USA Today reports.

The rarely seen shark, one of two remaining species of an ancient family of sharks that date back 80 million years, is known as a "living fossil," according to the South East Trawl Fishing Industry Association.

The creature, captured in the waters off the coast of Victoria by a fishing trawler, is about 6 feet in length, with a body that looks like an eel and has a shark-like tail, according to the group, which posted an image of the catch on its website:

This manner of creature is extremely rare.

"Its prehistoric origins are obvious in its primitive body; nearly all of the rare animal's closest relatives are long extinct," NPR notes. "In the most recent of those 80 million years, the frilled shark has been scaring the bejeezus out of humans who pull it out of the water to find an animal with rows of needle-like teeth in a gaping mouth at the front of its head."

"It has 300 teeth over 25 rows, so once you're in that mouth, you're not coming out," SETFIA's Simon Boag told ABC. "Good for dentists, but it is a freaky thing. I don't think you would want to show it to little children before they went to bed."

"It was like a large eel, probably 1.5 meters long, and the body was quite different to any other shark I'd ever seen," fisherman David Guillot, who caught the creature, told Australia's 3AW radio. "The head on it was like something out of a horror movie. It was quite horrific looking."

The shark was offered as a specimen to the Commonwealth Scientific and Industrial Research Organization in Australia, but the organization declined because it already had a specimen, SETFIA said on its website.