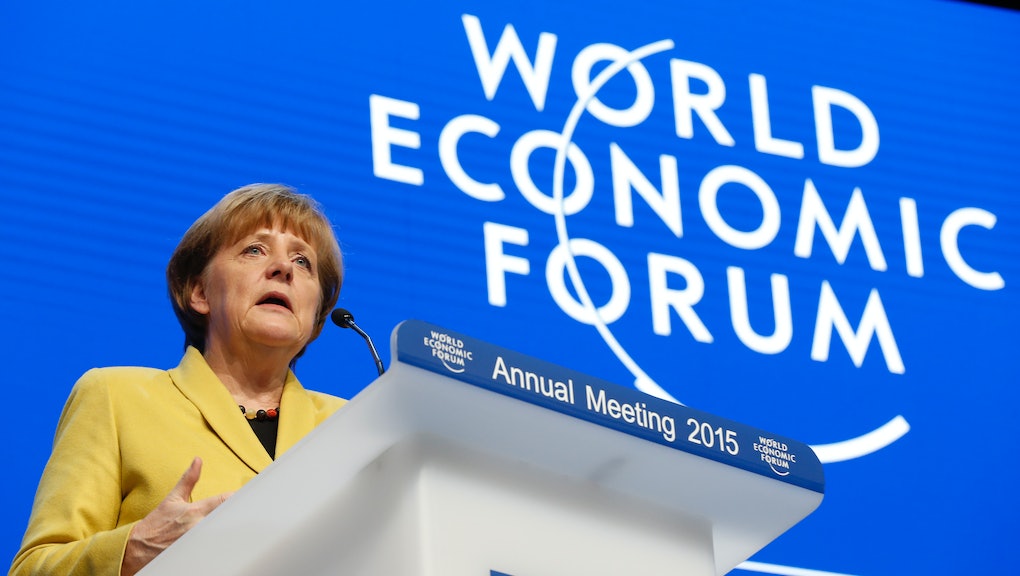 3 Charts the World's Financial Elite at Davos Need to See

As the world's economic elite arrive in the small Swiss Alps city of Davos for the annual World Economic Forum, 2,500 of the world's richest and most powerful people are suddenly getting worried about increasing inequality and climate change.

The only problem? The people meeting are the same aloof plutocrats who pushed the world to the brink of feudalism in the first place. Take, for example, American billionaire Jeff Greene, who accumulated his fortune by betting against subprime mortgage securities — essentially a poster boy for getting rich off the Great Recession. Greene, who flew in his wife, children and their two nannies to Davos on a private jet, told Bloomberg that "America's lifestyle expectations are far too high and need to be adjusted so we have less things and a smaller, better existence. We need to reinvent our whole way of life."

Hold the phone. Greene might be right on one thing: American commercialism is out of control, and the U.S. would benefit immensely by adopting more sustainable lifestyles. But the problem isn't the little people running around being idle and wasteful. It's people like Greene who hypocritically lecture the virtues of austerity and demand that the poor and middle class make all the sacrifices while taking up more and more of the pie.

Here are a few charts world elites should really be thinking about in Davos and the harsh truths they expose.

A recent Oxfam report found that the majority of the gains posted during the recovery from the global financial crisis in 2008 have gone to the very rich, and if current trends hold, the world's wealthiest 1% will hold more wealth than the rest of humanity combined by the year 2016. The richest 80 people in the world increased their net wealth from $1.3 trillion to $1.9 trillion from 2010 to 2014, while the collective wealth of the bottom 50% decreased.

Oxfam executive director Winnie Byanyima, one of the Davos co-chairs, questioned to Al-Jazeera America whether "We really want to live in a world where the 1% own more than the rest of us combined? Business as usual for the elite isn't a cost-free option. Failure to tackle inequality will set the fight against poverty back decades. The poor are hurt twice by rising inequality — they get a smaller share of the economic pie and because extreme inequality hurts growth, there is less pie to be shared around."

There is no polite way to say this: The richest people in the world control far too much of the world's wealth, and they aren't particularly interested in sharing it with the rest of us.

According to a recent U.N. report, while the global elite are busying partying with will.i.am in Davos, 1.2 billion people live on less than $1.25 a day, and 1.5 billion live in "multidimensional poverty," a metric that includes both low income and limited access to various basic services.

While the past few decades have seen major declines in global poverty rates, experts warn those gains could be precarious if world leaders don't meet some of the world's looming challenges. The "action/2015" coalition claims that the upcoming U.N. meetings on millennium development goals and climate negotiations could either reduce extreme poverty to 360 million people worldwide by 2030 or increase it to 1.2 billion.

Which outcome ultimately occurs depends a lot on whether politicians and the very wealthy are willing to change the status quo; with public trust in elected leaders low both in America and elsewhere, most people don't seem to have confidence that they're willing to change an increasingly rigged economic system.

By the way, as the Guardian's Seumas Milne points out, much of the progress that actually was made toward reducing poverty came in Latin America and China, both of which buck the neoliberal policies favored by Davos attendees.

3. Unless you do something about global warming, we're all screwed.

This animation by Bloomberg illustrates how rapidly the world is warming, while polling has demonstrated that rich countries are remarkably unconcerned about global warming compared to middle-income or poor ones. Coincidentally, one of the major reasons that climate talks have taken so long and been so ineffective thus far is because the richest countries demand frameworks that favor their interests. Meanwhile, the poorest countries stand to lose the most from a changing climate.

In one example of inequality helping accelerate global warming, the New Republic's Jeffrey Ball writes that rich countries and the wealthy elites that run them are unlikely to seriously consider changing their habits until the effects of a changing climate lead to serious and visible problems at home — by which time, of course, it will be too late for the world's vulnerable poor.

Why you should care: In 2011, Reuters' Felix Salmon attended a wine-tasting event in Davos organized by hedge-fund investor Anthony Scaramucci. He dubbed it a "drunken mess" intended to confirm "in the plutocrats' minds just how exclusive they, and Davos, really are."

The plutocratic crowd at Davos may claim to care about income inequality, but the reality is that they're the primary beneficiaries of it. The problem is not, as Greene speculates, that the 99% are too short-sighted and materialistic to make the painful sacrifices necessary for a better world — it's the top 1% we should be worrying about.