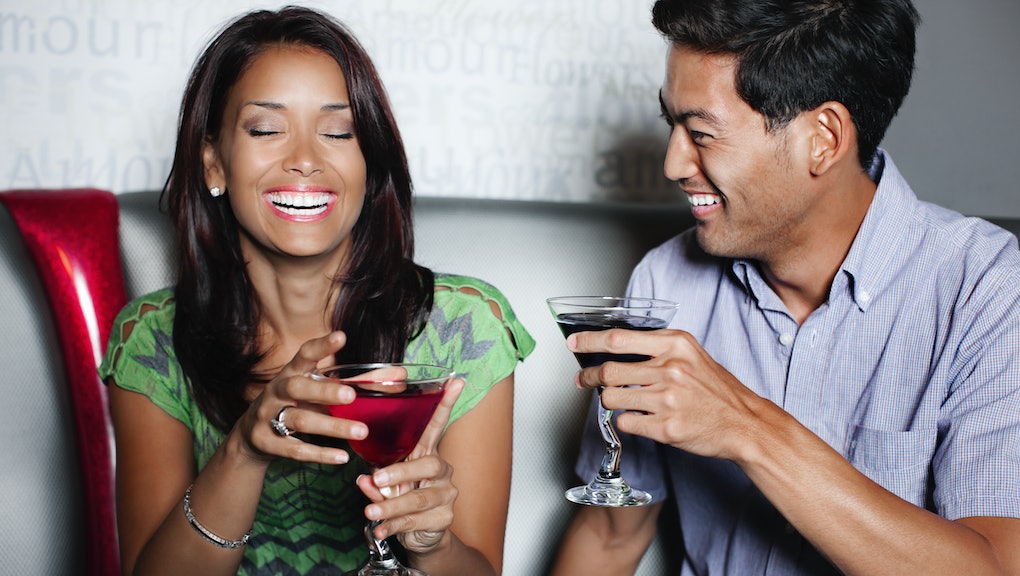 How to Make Your Date Think You're Hilarious, According to Science

With dating comes dating advice, sometimes unsolicited and often contradictory. Text. Don't text. Text only when texted. Who knows. But if there's anything that really does boost dating success, it's the ability to make 'em laugh. Sense of humor consistently tops the list of desired traits in potential mates, according to all the dating studies and surveys, ever.

This is great news for those who can serve up hilarious one-liners on demand, but what about everyone else? Being a riot ain't easy, but it is possible, at least according to Peter McGraw, a psychologist at the University of Colorado at Boulder and co-author of the book The Humor Code. By analyzing comedians doing what they do best, McGraw came up with a theory of humor he calls "Benign Violation Theory" (let's call it BVT). Anyone can use BVT, McGraw believes, to understand why a joke is funny and, in turn, be funny themselves.

How to do it: According to BVT, a successful joke satisfies three requirements:

1) The situation is a violation of some accepted norm, which means the joke-teller challenges a belief about how the world should be.

2) The violation is benign. The joke should leave psychological distance between the listener and the violation. So, comedians need to figure out how to challenge norms without crossing lines.

McGraw points to Jerry Seinfeld, the observant everyman, and Sarah Silverman, the aw-shucks provocateur, as examples of very different comedians who both illustrate BVT. The following bit is a good example of the Seinfeld strategy:

While this isn't Seinfeld's best joke, it does illustrate his approach well. He introduces a situation that most people know well: airplane takeoff. Then he dissects the experience and points out absurdities people don't realize they've overlooked. The joke creates a violation by challenging the assumption that the behavior of pilots and flight attendants makes sense. It's benign because picking apart takeoff protocol doesn't offend anyone. The Seinfeld Strategy, McGraw said, is safe to use on a date because it's low-risk, high-reward. If the joke doesn't work, you might seem lame, but you won't offend your date. Of course, Seinfeld makes it look easy. But here are some tips McGraw's picked up for translating the theory into practice

Dates are like sets. Comedians don't think like scientists when it comes to dissecting the essence of humor, McGraw said. But the jokesters who get HBO specials do tend to embrace one aspect of the scientific method: trial and error. They test out material to figure out which jokes work and why. Then they futz with punchlines accordingly. Treat your dates like sets. Reuse what works. Rejigger what doesn't. If someone hasn't heard it, it's new to them.

Make fun of yourself. Self-deprecation never gets old, which is why comedians often kick off sets with a few jabs at themselves. Doing this, McGraw said, gives them license to move on to critiques of other things and people. It can work in the real world too: One of McGraw's Tinder-loving friends, he says, texts the same ice-breaker to all of his first dates: "When you get to the bar, you'll see a really good-looking guy sitting at the bar. I'll be to his left."

It's all about empathy. When you do move on to jokes that aren't at your own expense, consider channeling Louis C.K.

Louie tackles important topics — racism, sexism, all the -isms. As a straight, white male, the world has been kind to Louie. If he wants to make an audience laugh about issues that negatively affect other people (but not him), Louie needs to minimize his perma-insider status. And he does, McGraw pointed out, by stepping into other people's shoes.

Ha-ha over a-ha. Louie, and other comedy greats, can deftly make an audience do two things: laugh and think. While the best material is both hilarious and insightful, McGraw urges people to prioritize laughter.

"If you give comedians a choice between saying something insightful, to change the way people see the world, without making anyone laugh, and telling a bunch of jokes that don't say much but do make people laugh," he said, "a comedian will always take the laughs."

Don't complain unless you're being funny. Moping about your no-good, very bad, horrible day on a date is poor form, but mining your mishaps for potential jokes is just resourceful. In his newest study, McGraw explored the value of humorous complaining. He found that jokey complaining helped people make a good impression, which jibes well with BVT.

Most importantly, be yourself: Above all else, McGraw says, make sure to craft benign violations that reflect your personality.

"When people say they're looking for someone with a 'good' sense of humor, they mean a well-matched sense of humor," said McGraw. "You shouldn't just have an arsenal of jokes that everyone finds funny. Tell the jokes you think are funny, and if your date doesn't laugh, you're saving yourself from another bad date."