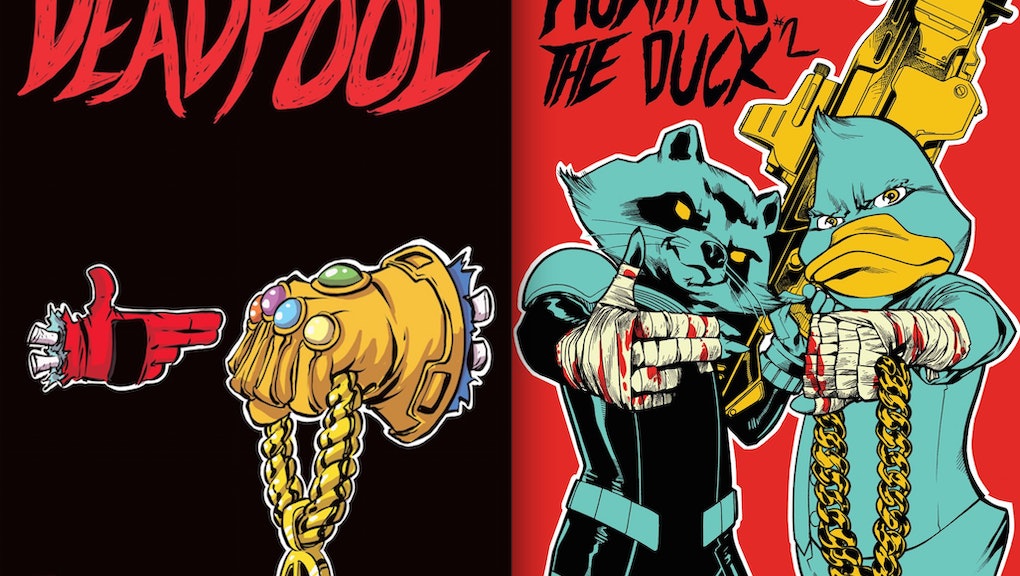 Run the Jewels absolutely dominated hip-hop in 2014. It was like the game was Loki and they were truly the "new Avengers" they always claimed to be. Run the Jewels 2 topped nearly every serious music publication's end-of-year list, landing them cover features in Stereogum, Pitchfork and Rolling Stone. Now they're set to appear on a very different sort of cover.

Coming in April, to celebrate their achievements, the group's iconic album art will be remixed into covers for two Marvel comics: one for Howard the Duck and one for Deadpool.

To the skeptic, the news may seem a cheap marketing ploy to cash in on current cultural trends. But this is far from the first time the comic book and hip-hop worlds have collided. Comic books and hip-hop have always had a surprisingly intertwined history.

"Comic books are a part of the creative world of a kid in an urban environment," rapper El-P, one half of Run the Jewels, told Rolling Stone. "You might not admit it on record, but you talk to almost every rapper — we all grew up with that shit. I guarantee you like 80% of any rappers that you meet probably went through a large comic book phase."

No joke: Even a cursory scan of some of hip-hop's biggest acts and albums proves El-P's assertion. Rappers from across hip-hop history have drawn lyrical inspirations, imagery or elements of their artistic personas from the world of comics. Many haven't been shy about sharing their love. Rap group Atmosphere stated comic's influence on their art plainly on their 2008 track "Always Coming Home to You": "Swear to god hip-hop and comic books was my genesis."

Three of Wu-Tang's founding members also entertain comic-inspired alter egos (Ghostface Killah aka Tony Starks/Ironman, Method Man aka Johnny Blaze/Ghost Rider and RZA's Bobby Digital). Back in 1999, the group actually had their own short-lived comic series, The Nine Rings of Wu-Tang. In 2013, Ghostface Killah released a comic to accompany his album 12 Reasons to Die.

It's not actually a surprise. Rappers adopting alternate personas that are significantly more badass than their day-to-day selves is a rule straight out of the Marvel universe. One of hip-hop's founding fathers, DMC of Run-DMC, once admitted that the Hulk inspired his entire artistic persona.

"The reason why it's the Hulk is because I identified with him because he was misunderstood," he said. "Sometimes I'm too soft. But you don't want to get me mad. Crash through walls, knock down doors! My whole delivery, my whole presentation, my whole rhyme style was from comic books."

DMC has since taken his comic book obsession further than most. Last year, he started his own independent comic book imprint called DMC, short for Darryl Makes Comics. Their first issue dropped in October.

RZA, the mastermind behind the Wu-Tang Clan, once offered a powerful explanation for why so many of hip-hop's early pioneers gravitated towards comics. "[G]rowing up with a single parent in the projects, kids often want to imagine a powerful, protective second self," he wrote in The Wu-Tang Manual, paraphrased by hip-hop scholar Mickey Hess. "They read comic books and want to find the superhero within."

Critics fear the same things: Both hip-hop and comics have long served as valuable forms of escapism for urban youth. Both have offered fans solid role models to help navigate their neighborhoods. "Comics and hip-hop share an underground voice," said Adam "Illus" Wallenta, a rapper, writer and illustrator, at a 2012 New York Comic Con panel. "There's a whole world of secret identities in both. You can express yourself and present yourself in more than one way in both worlds."

"Comics were something for delinquents," he said. "Parents and teachers would say it rotted your brain. The same was true of hip-hop. It was something that had a positivity that you gravitated to — and there was a lot of positive messages in rap music — stay in school, stay away from drugs, all of that. But parents hated it. It rotted your brains — just like comics."

The more nuanced aspects of hip-hop culture, its hyperbole and battle styles, also share numerous parallels in the comic book world. "Just the titles of Marvel Comics – The Incredible Hulk, Amazing Spider-Man, Fantastic Four – those positive adjectives are hyperbolic in the same way as Jay Z rapping about his Gucci watch and shit like that," comic book artist and hip-hop fanatic Ed Piskor told Nerdist.

Piskor is currently working on an epic comic series illustrating hip-hop history called Hip-Hop Family Tree, starting all the way back with the genre's birth in 1973 Harlem. He posts new comics weekly on Boing Boing, and explained the connection in totality back in December 2011:

A perfect fit: Comic books have long brought out the best in hip-hop, helping its pioneers shape the music's culture into the dynamic, colorful artform that it is today. Both comics and hip-hop started off as "cultural bastard children," and both have since become multi-million dollar industries. Cartoons continue to inspire hip-hop to this day. Adult Swim, the subversive cartoon network, is gradually becoming one of the most dedicated patrons of rap music. (Coincidentally, that network helped give Run the Jewels their start.)

Comics and hip-hop's long communion doesn't seem set to end time soon. If anything, with Marvel's Run the Jewels unprecedented homage on the way, it will only grow deeper. Comic book culture may mean even more to the next generation of rap's pioneers, and if the past is any indication, that's going to make both forms even more incredible, amazing and fantastic.