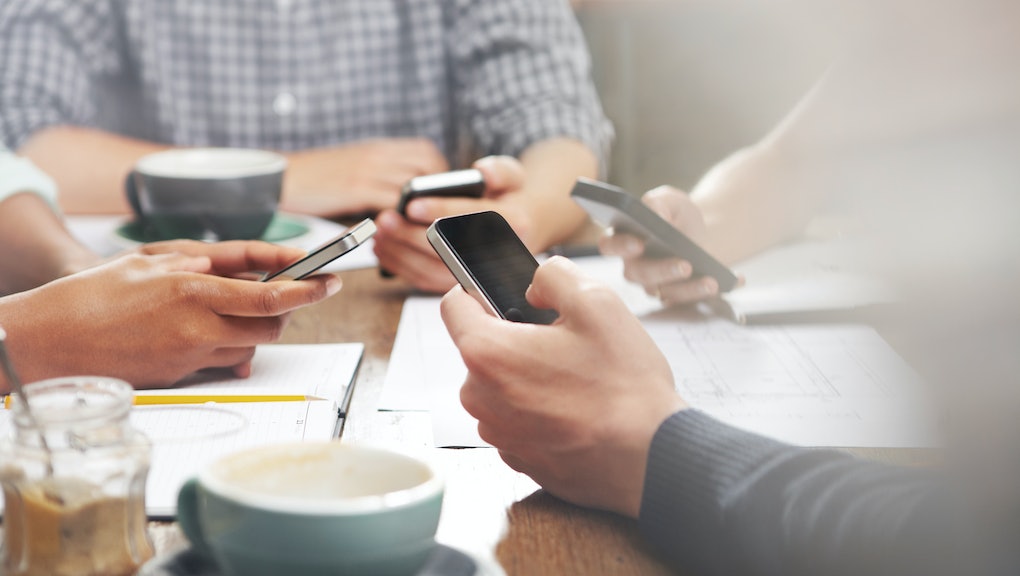 One Photo Sums Up The Most Stressful Part of Modern Dating

Warning: This photo is about to make your heart race and your palms get sweaty.

Since technology has given us the ability to send and receive messages instantly, we assume that the object of our affections saw our "Hey! We still on for dinner tonight? :)" moments after we hit "send." Facebook and WhatsApp even tell us exactly when a message is seen, which makes it all the more maddening when we don't get a response.

The anxiety caused by read receipts captures a stressful new reality: The immediate gratification of modern technology is causing an increased anxiety in dating.

Dating has always involved overthinking, but technology makes it worse. Sure, some of us are naturally prone to worrying ourselves sick over every social interaction. And communication in dating has always triggered those obsessive thoughts: Consider the classic image of the girl anxiously waiting by the phone after a date.

But with virtual communication, the impact of that overthinking tendency becomes even more acute. Even seeing those "typing awareness indicators" — the three dots that appear when your texting partner is composing their response — can be anxiety-inducing.

"Whenever someone doesn't text me back, I'm going to be thinking, 'Oh my gosh, what did I say wrong?' or 'What did I do this time?' or even 'Am I that bad at making conversation?'" Connor, 18, from British Columbia, told Mic. "I think to myself, 'Oh, maybe they're working,' 'Maybe they're at dinner,' or even 'They're in the middle of skydiving,' just to ease the nerves."

Even receiving a vague, one-word response can cause racing thoughts: "Are they just not wanting to talk to me?" Connor admitted to worrying.

Abby, 20, from Springfield, Illinois, told Mic that she once deleted a guy's phone number after he uncharacteristically stopped responding to her texts. "In fact, he had just lost his phone," she said. "I spent a whole day freaking out because I thought our conversations were going so well."

Emojis just don't tell us enough. Without face-to-face contact, we don't have the cues we need to determine whether that last "LOL" was meant as a joke or a diss.

"Because we are viewing communication in written form, it gives us more of a chance to ponder possible hidden meanings," Susan Krauss Whitbourne, psychology professor at the University of Massachusetts Amherst, told Mic.

That's especially problematic when the messages are banally simple. "You engage in a bunch of nonsense-texting, trying to schedule and make plans. People overanalyze these tiny messages and go crazy," Aziz Ansari griped to AV Club.

The absence of vital visual and aural cues can amplify our insecurities. "If you're feeling really confident about a relationship you have with another person, you will assume the best," Kim Schneiderman, a licensed clinical social worker from New York, told Mic. "If you're feeling insecure about the relationship you're more likely to think, 'They didn't like me' or 'They're avoiding me.'"

That influences how you respond to that person, or what you do about their silence. "There's the concern of, 'Oh my god, they didn't reply. ... Should I resend? But I don't want to look too desperate!'" Christina, 21, from Orange County, California, told Mic.

All this overthinking is bad for our health. The self-doubt unleashed by an unanswered call or text is bad news, Rebecca Gladding explained in Psychology Today, because buying into your own negative thoughts can cause you to "berate and dislike" yourself.

This can have real physical and emotional effects. When researchers from Ohio State University asked participants to ruminate on a stressful event, they discovered that levels of inflammation in the body actually rose in response to the negative thoughts.

In fact, a 2013 study of 32,827 individuals by the BBC's Lab UK and the University of Liverpool discovered that people who didn't ruminate or blame themselves for their difficulties showed lower levels of depression and anxiety, even if they'd experienced many negative events in their lives.

And while brooding isn't unique to the digital age, our constant conversations only provide more opportunities to feel misunderstood or ignored, and then blame ourselves.

Get a grip, everyone. There are endless reasons someone might not respond to a message, or respond ambiguously. Without knowing, it's too easy to meditate on every possible explanation. "When you don't know," Schneiderman said, "your mind tries to fill in the space."

If you're overthinking things, the only surefire way to clear the air is to speak up. "People aren't fully expressing themselves [online], and the more you give someone an opportunity to fully express themselves, the more you can understand what they really mean," Schneiderman advised.

That might mean triggering an awkward talk. But anyone who's ever been a part of a lazy three-week texting conversation with a Tinder match (or been utterly ghosted) knows it's worth calling something what it is — especially if it turns out you were getting stressed over nothing.