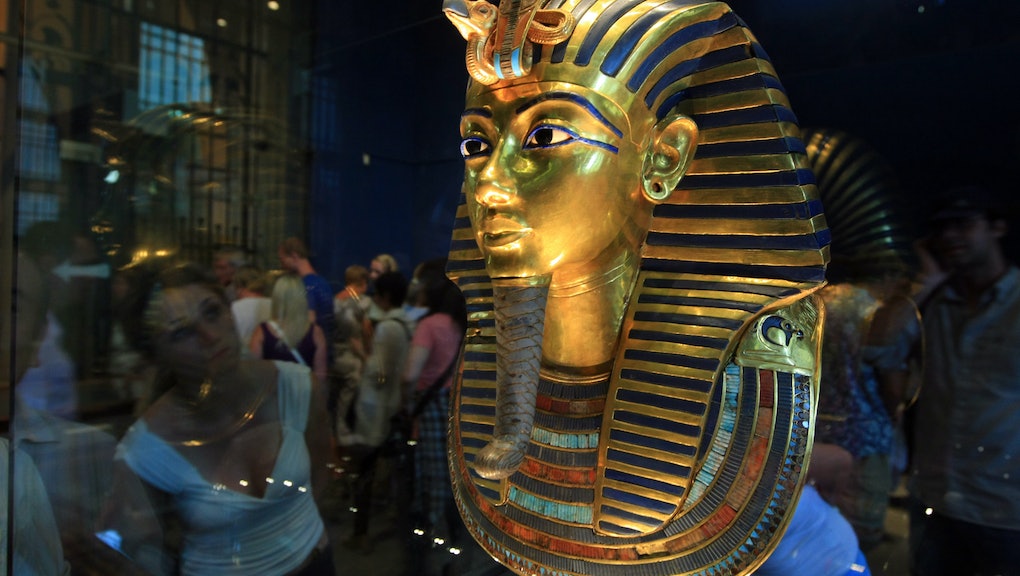 One of Ancient Egypt's Most Precious Artifacts Has Been Irreparably Damaged

One of Ancient Egypt's most famous artifacts, the elaborate golden burial mask of Pharaoh Tutankhamen (ca. 1332–1323 BC), has been seriously damaged after museum workers in Cairo hastily repaired it with epoxy.

The Wall Street Journal reports that the 3,200-year-old mask's beard was originally damaged under disputed circumstances while at the Egyptian Museum in Cairo. The mask had either been knocked during cleaning or removed because it had gotten loose, after which management ordered staff to fix the damage quickly. Then someone just stuck it back on using epoxy.

"Unfortunately, he used a very irreversible material," one conservator, speaking under the condition of anonymity, told the WSJ. "Epoxy has a very high property for attaching and is used on metal or stone but I think it wasn't suitable for an outstanding object like Tutankhamen's golden mask." He added that the application of the material was "irreversible" and said "a layer of transparent yellow" was clearly visible between the beard and the mask.

That's pretty bad. But it gets worse: Someone apparently attempted to scrape off the dried epoxy with a spatula and as a result, the mask is now covered in scratches. The Cairo Post reported witnessing similar damage.

However, Dr. Gharib Sonbol, who heads the Egyptian Museum's Central Repair and Restoration Administration, said that such reports have been exaggerated. "We used an epoxy that was appropriate for the mask," he told CBS News. "Everyone knows that the beard has been separated from the rest of the mask for a long time. There's even an old picture of the mask with [Egypt's former monarch] King Farouk with the beard and the mask separate."

These are tough times for Egypt's artifacts: In 2012, the New York Times reported that looters had stolen 50 of the Egyptian Museum in Cairo's treasures during the height of turmoil unfurling from the nation's 2011 revolution. Other museums were ransacked as well, and many pieces will presumably never return to their original displays.

Hopefully, there's a way to repair any damage that was done, because it would suck to still be looking at that epoxy in 500 years.