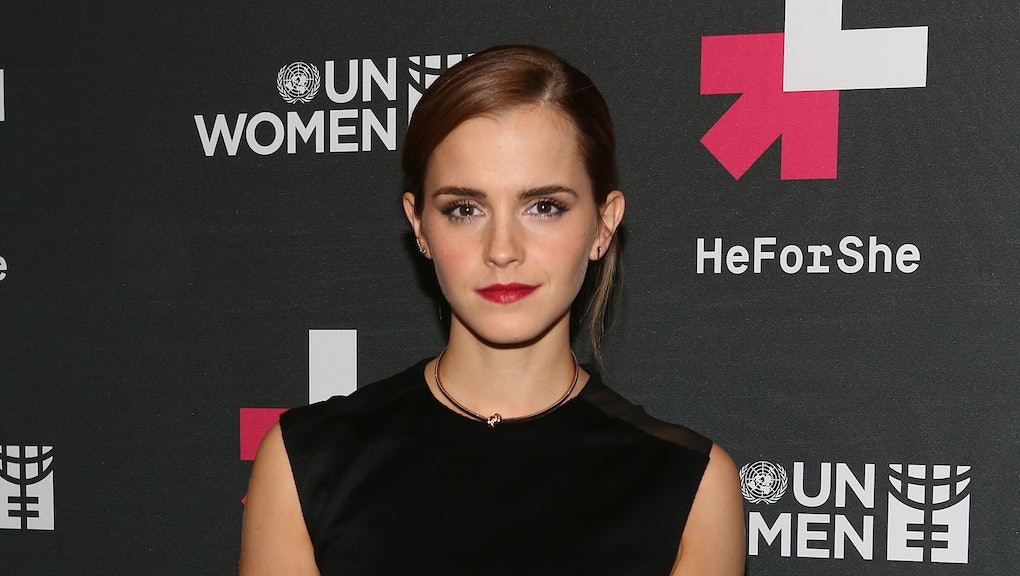 Despite the fact that women composed only 17% of attendees at the World Economic Forum's 2015 meeting in Davos, Switzerland, the male-dominated conference made time yesterday for a nod to gender equality. And who better to lead the conversation than the internet's favorite celebrity feminist (and former girl wizard) Emma Watson.

Emma Watson took the stage as part of her role as U.N. Women Goodwill Ambassador to announce the HeForShe IMPACT 10x10x10 Initiative. This one-year pilot program is an attempt "to engage governments, corporations and universities as instruments of change positioned within some of the communities that most need to address deficiencies in women's empowerment and gender equality and that have the greatest capacity to make and influence those changes."

Watson began the speech by acknowledging how moved she has been by the overwhelming response to the HeForShe speech she delivered last September, which sparked 1.2 billion social media conversations, garnered attention from fellow public figures, like Desmond Tutu, Prince Harry and Hillary Clinton, and inspired on-the-ground efforts, like one boy's enraged letter to a newspaper demanding equality. "I couldn't have dreamed it, but it's happened," Watson said.

U.N. Secretary-General Ban Ki-moon, who joined Watson on the panel, echoed her comments, noting: "HeForShe has signed up fathers who want to raise empowered daughters, leaders who know their societies will be stronger when there are as many women in parliament and in business as men and ordinary people who are fed up with violence and discrimination against women and want to be part of a global force for change."

But now, Watson cautioned, it's time for a greater commitment. IMPACT 10x10x10, she stated, is about encouraging governments and corporations to "make concrete commitments to gender equality." But it's also about humanizing the effort.

While Watson's initial HeForShe speech has been criticized by some as only superficially feminist, especially in ignoring the ways men benefit from gender inequality, the ambassador ended her address at Davos with a sentiment we can all get behind:

"It is my belief that there is a greater understanding than ever that women need to be equal participants in our homes, in our societies, in our governments and in our workplaces. And they know that the world is being held back in every way because they are not. Women share this planet 50/50 and they are underrepresented, their potential astonishingly untapped."