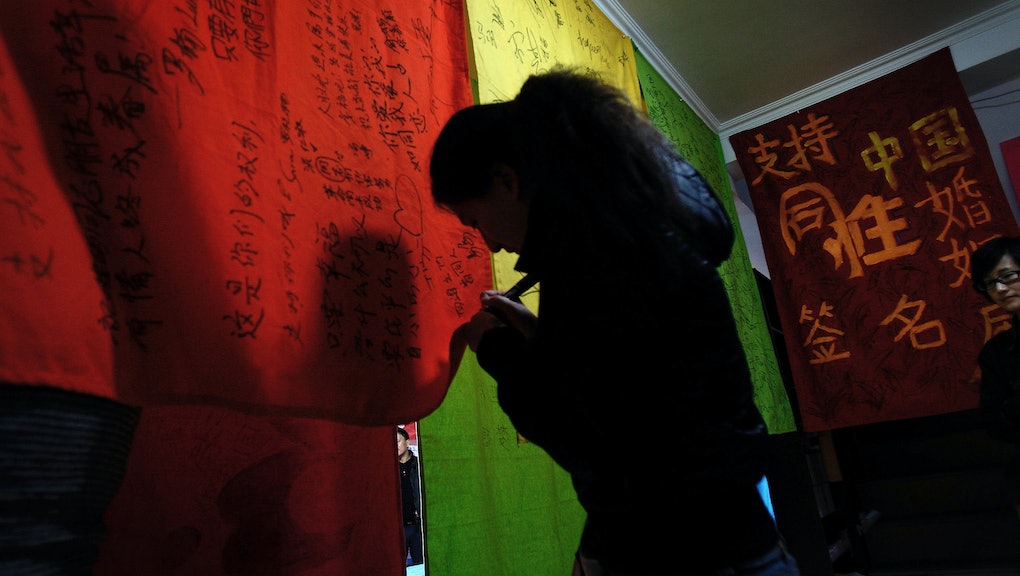 Gay people are marrying in droves in China — but not the way you think.

"Xinghun," or cooperative marriages between gay men and lesbians, are an increasing phenomenon in China. This isn't happening because homosexuality is technically illegal — it was decriminalized in China in 1997 and declassified as a mental illness in 2001. Instead, the situation reflects a deeply traditional culture that demands young people get married and have children to continue the family line, as a sign of one's filial duty.

For Chinese youth, these cooperative marriages, also known as "fake marriages," are the only way they can negotiate their lives and traditions while trying to avoid societal stigma.

The open closet: Gays marrying to hide their orientation is nothing new in China. Zhang Beichuan, a professor at Qingdao University's medical school, told the Atlantic that these types of marriages have always existed; the difference is that in past decades, closeted gay men would marry "unsuspecting straight women to hide their homosexuality." The Atlantic reports that, according to Zhang's research, "there are 20 million gay and bisexual men in China, of whom around 80% have married straight women. This means that around 16 million heterosexual women in China today are married to gay men."

It is only in recent years, however, with the facilitation provided by technology, that gays and lesbians are actively seeking each other out for marriage. A number of websites and apps exist in order to make these marriages happen, even providing contract models for gays and lesbians to work out a perfect arrangement regarding housing, the potential for children and public appearances. For example, Chinagayles.com is the country's largest xinghun dating website, with "nearly 380,000 registered users." The new app Queers had over 10,000 gay and lesbian users "in less than two weeks after the launch," claimed the app's co-founder, Liao Zhuoying, in an interview with the South China Morning Post.

Society has not caught up to the law. According to a 2013 Pew study, only 21% of China's population believe "society should accept homosexuality." So while the Chinese gay and lesbian population no longer needs to fear criminal punishment or legal retribution, they are still terrified of being sent to therapy or being forced to undergo "conversion" shock treatment. "If marriage were not considered mandatory on mainland China, and people were not stigmatized for staying single," said researcher Stephanie Wang, "xinghun would not be necessary."

Take the case of Xiaojiong, a lesbian who lives with her girlfriend, Xiaopu, in an apartment with another "T" (tomboy) and "P" (feminine) couple in a province north of Beijing. She told the Daily Beast that she hopes xinghun "will be a temporary thing." All four women found gay men to marry through the xinghun dating website she founded — it's coincidentally how she met Xiaopu too.

But even if their immediate families accept their homosexuality, NYU East Asian Studies professor Rebecca Karl explained to the Atlantic, "the heterosexual nature of marriage is non-negotiable. They are thus expected to marry someone of the opposite sex to give themselves 'family and social cover.'"

Increased visibility is the key to changing public acceptance of gays and lesbians. With the decriminalization of homosexuality only happening in the last 20 years, the LGBT rights movement in China is relatively nascent, but evolving. "If more gay people come out, then perhaps it'll be like a clothing style that the public finds unappealing at first," Xiaojiong said. "But if more people start wearing it, then people might become more used to it."

Pride parades, like the one in Shanghai entering its 7th year, along with other forms of activism are aiding this drive to visibility and acceptance. But there's still a long way to go in terms of LGBT rights. China, with its "don't support, don't ban, don't promote" policy, has yet to pass any anti-discrimination legislation protecting LGBT people. This, in conjunction with low public approval, suggests that xinghun is a contemporary phenomenon with no clear end in sight.