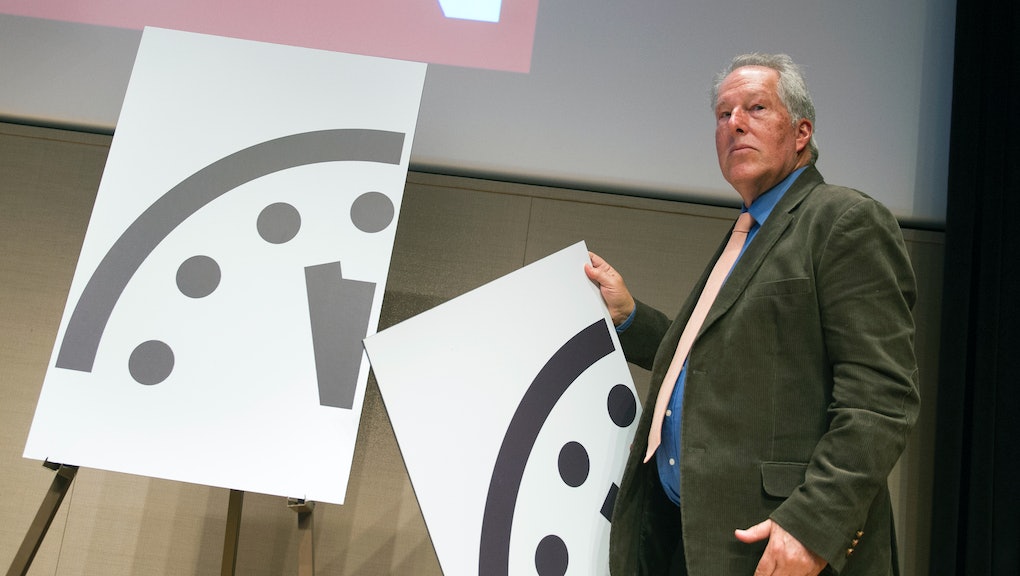 The World is Officially Two Minutes Closer to Doomsday

The Bulletin of the Atomic Scientists, the brainchild of the scientists who worked on the Manhattan Project and produced the first atomic bombs used during World War II, has moved its iconic Doomsday Clock two minutes closer to midnight. It now stands at three minutes before midnight — midnight signifying complete global catastrophe.

Following the bombings of Hiroshima and Nagasaki, the scientists developed the Doomsday Clock in 1947 to keep the public up to speed on the dangers of nuclear proliferation. But the latest change was prompted by dangers posed by "unchecked climate change, global nuclear weapons modernizations and outsized nuclear weapons arsenals," according to a press release. They specified rising sea levels as a particularly worrisome concern.

"In 2015, with the clock-hand moved forward to three minutes to midnight, the board feels compelled to add, with a sense of great urgency: 'The probability of global catastrophe is very high, and the actions needed to reduce the risks of disaster must be taken very soon,'" they added.

The clock's hands have shifted 18 times since its creation. The clock was last updated in 2012, when it sat at five minutes until midnight. NPR notes that it last occupied the 11:57 p.m. spot in 1984, when tensions peaked between America and the Soviet Union.

It has occupied a wide range of positions from the outset, and it has also been moved back a few times to signify progress. In 1991, for example, it read 17 minutes to midnight; in 1953 it sat just two minutes from midnight.

Congratulations, world! We're that much closer to complete and total destruction.