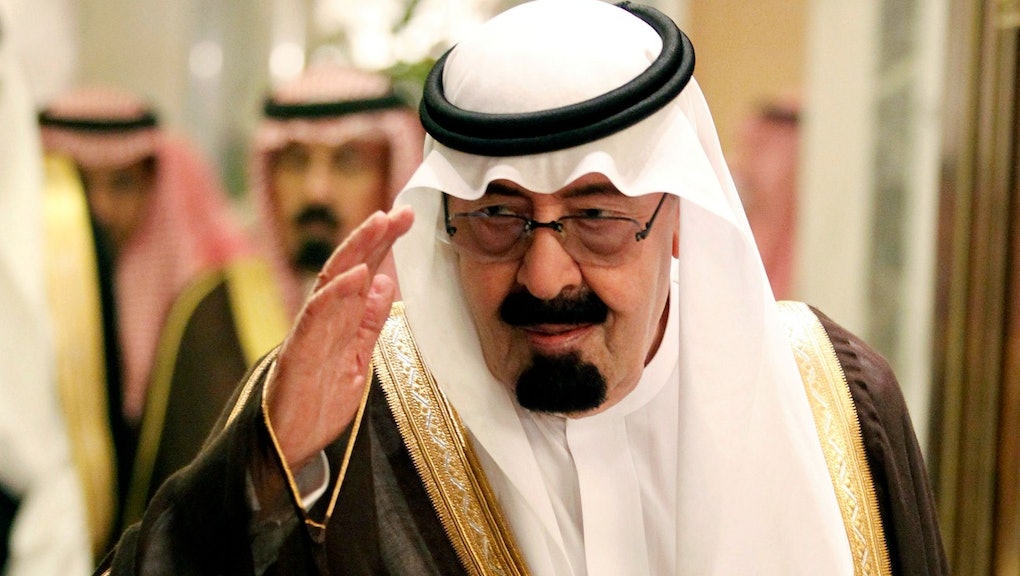 King Abdullah Wasn't a Reformer. He Was a Monster.

Abdullah bin Abdulaziz Al Saud, King of Saudi Arabia and Custodian of the Two Holy Mosques, is dead. For some reason, the world is not glad to be rid of him.

His death at age 90 after nearly a decade on the throne, and another as the kingdom's de facto head of state, is being described by the Western press as one of a "cautious reformer," a "wily king" who "promoted stability," a "gradual modernizer." Secretary of State John Kerry described him as "a man of wisdom and vision." Sen. John McCain dubbed the late autocrat "a vocal advocate for peace."

For an absolute monarch of limitless power and influence whose reforms, in the words of the Associated Press, "echoed mightily" in the kingdom over which he presided, Abdullah exercised this power very discreetly. Reform so cautious that it barely registered with those who lived under his rule. Wiliness that might be better described as paranoia. Stability promoted at the point of a gun. Modernization instituted so gradually that, for all intents and purposes, it may as well have never happened at all.

The lionization of Abdullah isn't a surprise. American attitudes toward despotism have always hewed closer to understanding than condemnation when the dictator in question affects the trappings of royalty. In North Korea, an insular autocratic family that passes the mantle of its ill-gotten leadership from one member to another and imprisons its subjects for even the mildest criticism is decried as the "Hermit Kingdom," violator of basic human rights and foe of democracy. But in Saudi Arabia, as in Jordan, Brunei, Qatar and other dictatorial monarchies, the ruling family and its anti-democratic government is excused, even romanticized. Nobody makes buddy comedies about assassinating members of the House of Saud.

This Orientalist exoticism glosses over the nuts and bolts of the Saudi monarchy. The few acknowledgments of Saudi Arabia's repressive government have focused on the banal: Anecdotes of female Saudi pilots being chauffeured to the airport, jokes about how hot a burka must be in the desert sun, wink-wink references to the ironically homosocial tendencies of Saudi society, where being openly gay can be cause for state-sponsored murder but Western men are cat-called on the streets of Riyadh.

Abdullah is dead. Let's bury the myth that he was a reformer with him. The king did not make any legitimate reforms to the government of Saudi Arabia. Period. When juxtaposed with the atavistic impulses of the more reactionary members of the Al Saud — and the Wahhabist religious fanatics whose approval gives the royal family its legitimacy — Abdullah might be considered a moderate. But there's no victory in beating the lowest common denominator. Abdullah's "reformist" moniker is a meaningless label on loan from Western powers enjoying a full gas tank and a guilty conscience.

The unassailable truth is that Abdullah presided over two decades of heinous human rights abuses, ranging from the imprisonment and torture of political opponents to the the beating and execution of women for sorcery, infidelity and their own rape. Foreign workers are treated as stateless persons barely one rung up from chattel slaves, powerless to claim the law's protections yet subject to all of its brutality.

Obituaries have emphasized the comparative stability of Abdullah's rule. Saudi Arabia is the dominant regional power in the Middle East, a fixed anchor in the decades-long maelstrom of terrorism, Islamism and half-baked revolution in the region. Of course, Abdullah's willingness to kneecap pro-democratic and revolutionary movements in neighboring nations through disastrous proxy conflicts was the bluntest instrument of this "stability." As the Arab Spring provided hope across the world for organic democratic movements in the Middle East, Saudi Arabia thwarted these movements by giving financial and military assistance to friendly regimes with revolutionaries at the gates. Saudi forces crushed an uprising that threatened neighboring Bahrain's House of Khalifa, assisting in the arrest of thousands of people. Several died while in custody. Many more were tortured.

Meanwhile, Saudi Arabia became the most powerful provider of financing and weapons for the most extreme of the rebel groups in the Syrian Civil War, morphing a democratic uprising against Bashar Al Assad's brutal regime into an intractable conflict that has killed hundreds of thousands and fostered the climate that allowed for the rise of the Islamic State group.

We need to raise our standards for reform. The statements of Western leaders notwithstanding, Saudi Arabia should not be applauded for "modernization" that still leaves its policies on human rights in the Dark Ages. The idea that its subjects and resident slave laborers should fall on their knees and thank Allah for for Abdullah's ersatz reforms is hideous.

"But he expanded the right to vote to women!" apologists have declared. The truth? The "right" to vote in Saudi Arabia is meaningless. Elections are a symbolic travesty: The Al Saud hand-picks 50% of the members of every municipal council, whose remaining "elected" members have little power anyway. Those elections are frequently postponed for no stated reason — the scheduled elections in 2009 were delayed by the royal family for two years.

Saudi Arabia is the clique of rich kids who have been allowed by the ostensibly human rights-conscious West to ignore the civilized world's rules because of the possibility that if we pissed them off too much, they would take their oil and go home. Abdullah was their Regina George: A narcissistic tyrant who thought he could do whatever he wanted because no one in his life ever told him he couldn't.

The glitz of Abdullah's funeral — where, hand-wringing Westerners have been assured, he was given a "simple Muslim burial" in an anonymous grave — may overshadow his legacy of brutality and false moderation, but as the recent public flogging of an "apostate" blogger shows, it can't be hidden forever. May the king's counterfeit reform be buried with him.