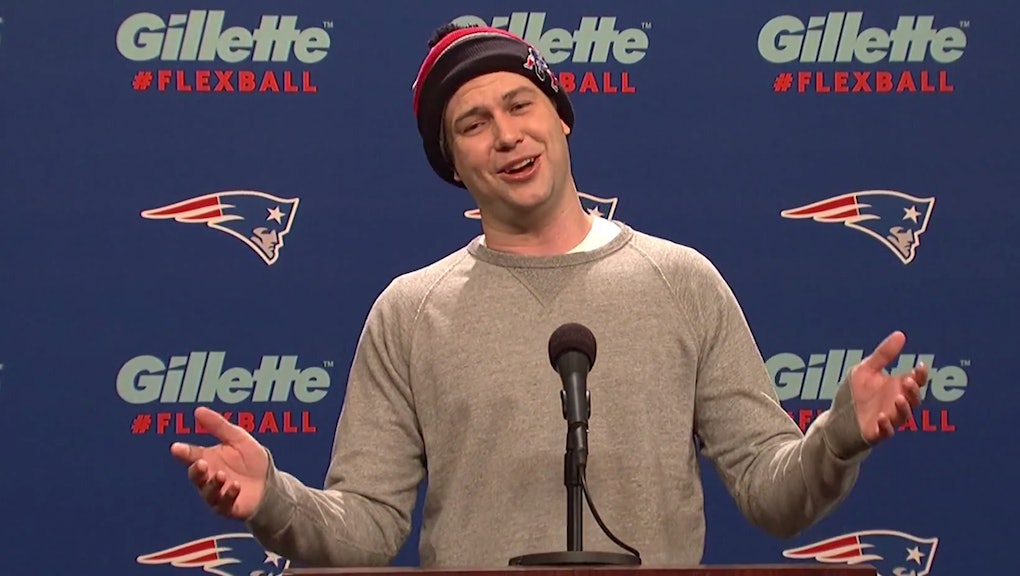 There's one question that has yet to be definitively answered on Deflategate: Who released the pressure from Tom Brady's balls (during the AFC championship game last Saturday)?

On Saturday night's episode, Saturday Night Live dug into this mystery and lampooned everything from Patriots coach Bill Belichick's apparent willingness to toss Brady under the bus to Brady's implausible denials of involvement:

"Whaaaat? Look, guys, I'm just the quarterback, all right? Once I take that snap, all I'm thinking about is throwing bomb-ass spirals to Gronk, man. I'm not worried about the air pressure in the ball. That's nerd stuff. That's honestly above my pay grade," Brady (played by Taran Killam) says nervously.

"Yeah, is that a lot? Guys, I don't know things!" Brady insists. "I'm not a science computer!"

Then the focus switches to fictional equipment manager Dougie Spoons (played by Bobby Moynihan), who quickly takes the whole proceedings into a parody of A Few Good Men: "You can't handle the truth. Son, we live in a world that has balls. And those balls have to be inflated by men, with pumps ... You're damn right I deflated those balls!"

In the real scandal, observers say it would have been impossible for Brady to get his hands on a deflated football without assistance from a complicit football attendant or ball boy. But as Boston.com notes, the real Belichick did back every every member of the team Saturday.

The NFL, in the meantime, has conducted over 40 real interviews into the Deflategate controversy to little avail, while some commentators are calling for the Patriots to be kicked out of the Superbowl. As dumb as the controversy seems, it's definitely not over yet.