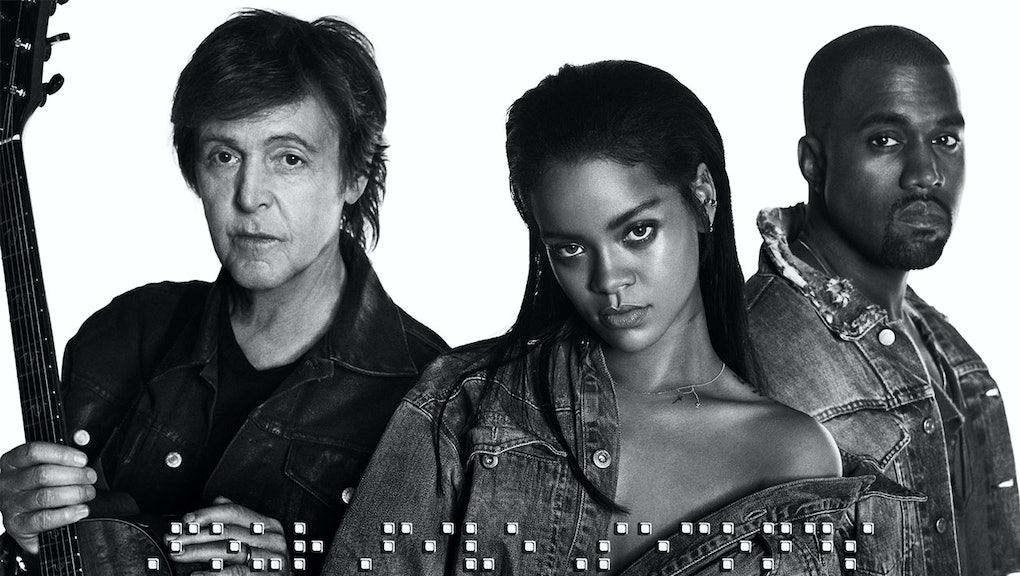 More and more, it seems like the only way for a superstar artists to release new music is by just dropping it out of nowhere with no warning. Beyoncé did it, Kid Cudi did it and now Rihanna is doing it with the first single off her upcoming album.

Rihanna made the announcement via a tweet on Saturday night, simply saying, "First glimpse at my new music!!!" followed by a link to her website.

Fans were directed to Rihannanow.com where they could listen to "FourFiveSeconds," a stripped-down collaboration with musical giants Paul McCartney and Kanye West. The song can be downloaded directly from Rihanna's website or for $1.29 off iTunes.

Earlier this year, West dropped his own collaboration with Sir Paul in the form of "Only One," which may have led to this unlikely trio's coming together. "FourFiveSeconds" can best be described as a light country acoustic song with McCartney on guitar and West singing, not rapping, a guest spot. It's certainly a departure from some of her earlier and more heavily produced work.

The minimalist song also marks the Barbados-born singer's first release since 2012's Unapologetic, and her first since leaving her long-time record label Island Def Jam. According to rap-up.com, Rihanna's new album will also feature work with hit-makers such as Mike Will Made It, Ne-Yo and DJ Mustard.