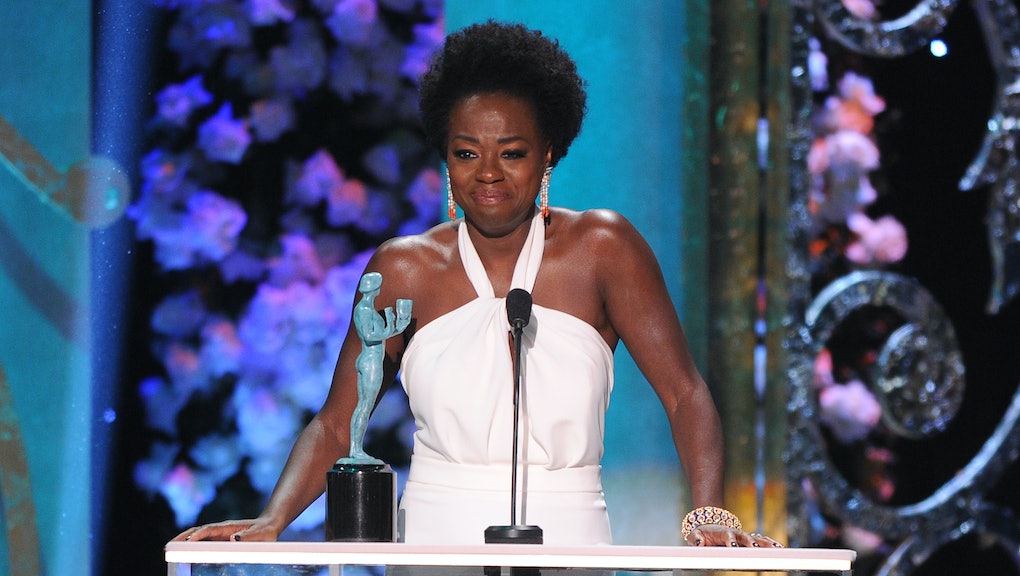 Are you listening, Oscars?

Actress Viola Davis used her Screen Actors Guild Awards win on Sunday night to deliver a moving statement about diversity on the silver screen — a message that Hollywood has sorely needed in light of the recent backlash to the 2015 Oscar nominees, which critics say is the whitest roster in 19 years.

Accepting her award for Best Actress in a Drama Series for ABC's How to Get Away With Murder, Davis opened her speech by talking about her young daughter, who often asks her for stories. Inevitably, Davis said, her daughter includes one specific request: "Mommy, can you put me in the story?"

"It starts from the top up," Davis said, thanking the production and writing team behind her award-winning show "for thinking that a sexualized, messy, mysterious woman could be a 49-year-old, dark-skinned African-American woman who looks like me."

Davis' message encapsulates one of the simplest, most moving reasons we need onscreen diversity: so viewers, particularly young people, can see characters who look like them.

Who we see on screens matters. While the color of an actor's skin may seem like a small thing compared to the role they play and the lines they deliver, it's absolutely essential to those viewers who are consistently underrepresented in the movies and on TV. From journalism to television programming, and from literature to movies, all media reflects and reinforces the most basic tropes about our culture. For those who feel traditionally marginalized in American society, that representation can matter just as much as diversity in the classroom or political office.

This is something sociologists and viewers alike have understood for years. The people chosen to play heartthrobs, femme fatales and superheroes onscreen embody the values and qualities in men (and occasionally women) our society deems worth worshiping. When those heroes are all white, it sends a clear message to fans.

Davis isn't the first actor to vocalize this important point. Gina Rodriguez of Jane the Virgin touched on it in her Golden Globes acceptance speech, speaking movingly about representing Latino Americans on the small screen. And after her stratospheric rise during the 2014 awards season, Lupita Nyong'o told Glamour:

"I've heard people talk about images in popular culture changing, and that makes me feel great, because it means that the little girl I was, once upon a time, has an image to instill in her that she is beautiful, that she is worthy. ... Until I saw people who looked like me, doing the things I wanted to, I wasn't so sure it was a possibility."

But screen time isn't enough; we need to reward diversity. Hollywood is still lagging woefully behind in representing racial and ethnic minorities onscreen, with the shameful numbers to prove it. While Uzo Aduba also took home an SAG Award for Orange Is the New Black, her win and Davis' are the exception, not the rule. These wins are signs of progress, but it's slow-going.

But the 2015 Oscars nomination backlash showed that it's not just about casting underrepresented people in roles; those people need to be recognized, nominated and awarded when it counts. Though Selma got a Best Picture nomination, the nominating committee failed to acknowledge any of the actors, or the movie's director Ava DuVernay. It's all well and good to increase the onscreen diversity, but Hollywood's got to put its money — in this case, its awards — where its mouth is.

Sunday night's SAG Awards made this critical oversight abundantly clear when it presented a powerful montage on diversity. The reel highlighted "landmark portrayals" on TV and film that shone a light on issues like homophobia, sexism, racism, ableism, addiction, alcoholism and age discrimination.

But the montage, inclusive though it was, only served to highlight how few minorities were up for nominations during the night's awards.

The problem starts at its source: As Mic's Liz Plank noted about the Oscars, "It's unconscionable that the most-watched and most prestigious awards show has judges that are 77% male and 92% white. It does not represent the entertainment industry, nor does it represent moviegoers, 46% of whom are people of color and a majority of whom are female."

The SAG Awards should, in theory, have a more diverse voting base. As a union representing approximately 160,000 members, SAG-AFTRA has stated an emphasis on industry diversity, even issuing its own investigative reports on the matter. Yet, out of the 50 actors and actresses nominated for individual SAG Awards on Sunday, there were just three non-white nominees.

As Davis said, it starts at the top.