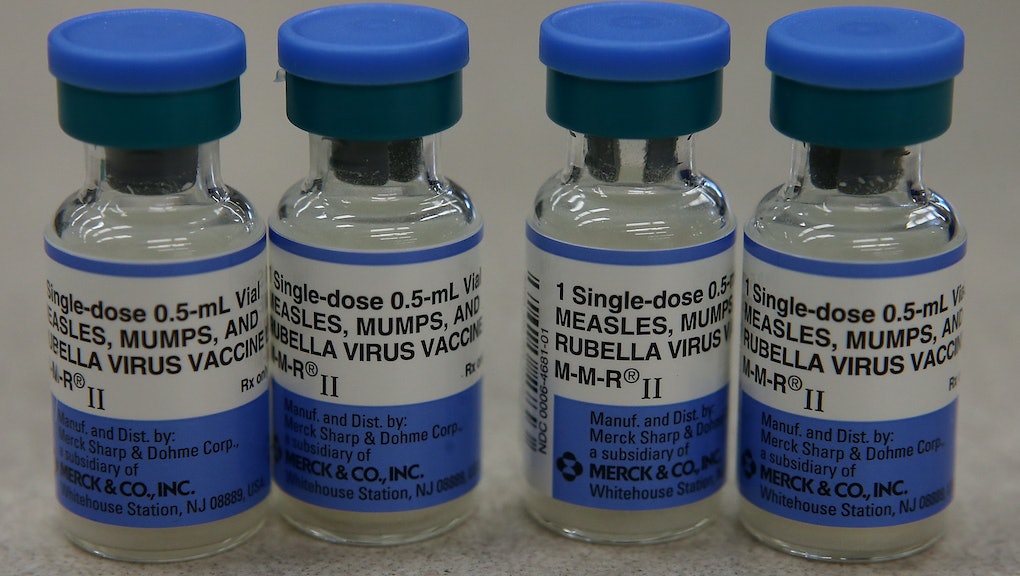 195 Reasons Why the Anti-Vaccine Movement Impacts All of Us

The woman is one of two more cases of measles confirmed Tuesday in Arizona, both of which were linked to a family that contracted the disease while traveling to Disneyland. California's famed theme park has been ground zero for a massive measles outbreak that has left at least 73 people stricken with the illness.

But while the outbreak itself is alarming, it's Arizona's potential massive measles exposure among children that highlights the biggest problem with the anti-vaccination movement: Getting vaccinated isn't about you — it's about everyone else.

Getting vaccinated is about those who can't defend themselves: As reported by Vox, "The awful truth of the anti-vaccine movement is that it puts the most vulnerable populations at risk: infants under 12 months of age, who can't get vaccinated." The Disneyland measles outbreak confirmed as much by the California Department of Public Health: Six of the confirmed cases were in infants too young to have been vaccinated.

"The measles vaccine is not licensed for use on babies younger than 12 months," Vox's Sarah Kliff wrote. "That means that, for the first year of life, babies depend on the fact that everybody else around them gets vaccinated. This essentially creates a firewall: If other people are vaccinated, they won't catch the disease — and won't spread it to young children who cannot get protection."

This phenomenon — the epidemiological logic underpinning the social necessity of vaccines — is what the scientific community calls "community immunity" or "herd immunity." If every American of age was vaccinated, measles wouldn't spread much further. Vaccinated people essentially act as barriers to measles outbreaks, since the disease can't pass through them and infect other people.

The rise of measles point to breakdowns in herd immunity as the primary cause for recent outbreaks. According to the Centers for Disease Control and Prevention, measles outbreaks have been growing in the U.S. due to unvaccinated people traveling outside the country and bringing the virus back home — but if a higher portion of the population is vaccinated against measles, it's far less likely that the disease will spread to those populations especially vulnerable to infection.

The problem is only going to get worse: According to the CDC, the U.S. experienced a record number of measles cases during 2014 — 644 cases from 27 states, the greatest number of cases reported since the elimination of the disease was documented in the U.S. in 2000.

If there was ever a time to start taking vaccines seriously, it's now.

But don't vaccines cause autism? I'm just going to blockquote myself from the last time I debunked this ridiculous myth:

No. Time and again, research has demonstrated that the 1998 "groundbreaking" study that allegedly linked vaccines to autism was just bad science with no basis in reality.

So, we should get vaccinated? Yes! A million times yes! And if the science doesn't persuade you, consider the story of Marin County, California, 6-year-old Rhett Krawitt, who's been left vulnerable to diseases like the measles after undergoing several rounds of chemotherapy to fight leukemia. NPR reported on the dangerous position the Disneyland measles outbreak has left the Krawitt family:

Rhett cannot be vaccinated, because his immune system is still rebuilding. It may be months more before his body is healthy enough to get all his immunizations. Until then, he depends on everyone around him for protection — what's known as herd immunity.

NPR reports that the boy's father is requesting the district "require immunization as a condition of attendance, with the only exception being those who cannot medically be vaccinated" in order to protect his son. But the saddest part of his story is that he shouldn't have to: Like those 195 children potentially exposed to the measles in Arizona, no child's life should be put in jeopardy because of non-scientific hysteria over vaccinations.

This isn't about your health. It's about the health of everyone around you.

An earlier version of this article cited and linked to Vox, but did not include quotations around the phrase "the awful truth of the anti-vaccine movement is that it puts the most vulnerable populations at risk: infants under 12 months of age, who can't get vaccinated." The story has been updated to fully attribute Vox's language.