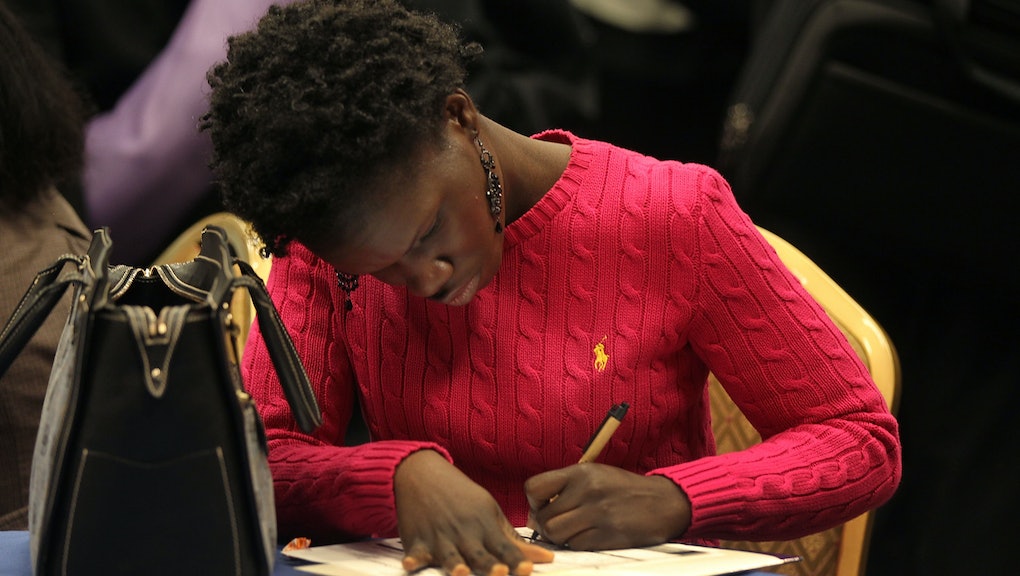 Your Name Says More About You Than You Think

When it comes to stereotyping others, it takes no more than a name.

That goes double for non-Anglophile names that carry a strong cultural currency, like TraNequa or Shaniqua.

Sexism, racism and classism influence how a person perceives another's name, even when just reading it on paper. Need we mention the racist hounding of our president, Barack Hussein Obama? From discrimination in the classroom to job discrimination and housing discrimination, people with stigmatized names face damaging psychological and socioeconomic consequences.

In in his upcoming documentary, Searching for Shaniqua, filmmaker Phill Branch uncovers the debilitating effect one's name (including the three listed above) can have on his or her life.

There is so much meaning in a name. A number of studies have outlined the socioeconomic impact on people with ethnic names. Job discrimination, for example, is one manifestation of this form of racial profiling. This past summer, BuzzFeed produced a video highlighting the trend of "whitening the résumé" by people of color who encounter workplace discrimination simply because of their name. New York University law professor Kenji Yoshino calls this phenomenon "covering," whereby people of color and other minorities intentionally hide parts of their identity in order to protect themselves against social stigma and other forms of discrimination.

As a gay black male writer who is the foster parent to two little girls, Branch, creator of the PuNanny Diaries, is personally invested in understanding this cultural phenomenon. Through dozens of interviews with people with culturally stigmatized names across America, Branch aims to make people think about how race and class in particular figure in the societal stigmas attached to them in Searching for Shaniqua.

The inherent shame in a name: One story that stuck with Branch the most was that of Chinneaqua Matthews, featured in the film's trailer. "She was just a walking stereotype," Branch said in an interview with Mic. She hid her name-tag from customers, and, Branch recounts, "especially black customers, to avoid being labeled as 'ghetto.'" Her name placed an undue burden on her daily life, and made her subject to microaggressions because her name gave her a presumed identity. "She said that once some customers learned her name, they treated her differently," Branch lamented. "They didn't see her as a person."

But Branch is quick to note that all names can be stereotyped. These stereotypes occur along race and class lines. "There are names that white people are given that come loaded with stereotypes," he explained. "It happens because we are class-conscious. Names have always been important."

The many sides of racism: With a name like Shaniqua, women face racist, classist and sexist assumptions about their identity. Stereotypes can be hurled by anyone, as Chinneaqua's story made evident. Branch also recounted the story of a personal friend named Shaniqua to describe the daunting and psychologically damaging breadth of prejudice these women face. "I look at someone named Shaniqua, who is a lawyer, and I can recognize how she has to not only fight as a woman, she also has to deal with obstacles related to race and then she has to face prejudice from black and white people about how she is named," Branch explained.

Naming is a political act for people of color. Consider the history of American racism, which, during slavery, forbade black and brown people from keeping their own family names. Naming, therefore, for people of color, is always political. "At one time, naming children something other than Phill, James, Kim, etc. was an act of resistance for many black parents," Branch contended. "They were asserting their agency."

Selecting a name for a black or brown child is a complex process for most parents. "There almost seems to be a conscious effort by middle-class black parents to make sure their kids are treated with whatever respect their pedigree affords," Branch said. For the politically-conscious parent, the aim is to find the perfect name that both reflects a deliberate break from America's racist past while not contributing to the ostracizing of the child by giving them a "ratchet name." If social mobility is the objective, Branch explains, "there's also more of an understanding of and compliance with white cultural norms. Considering what parents know about the obstacles their kids may face, I understand why naming is done with an eye toward a desired future."

This "desired future" is a challenge for people with names that are loaded with cultural meaning. Social mobility is very much tied to a person's name, as Benjamin M. Friedman noted in a piece at the Atlantic. But Branch's project expands the idea that a surname is not all that matters — first names matter, too. The bind for many people of color who want to avoid Anglophile names is tantamount to a catch-22 of how to have a name that isn't already prescribed by racist stereotypes.

But is there a way to remove the cultural meaning from a name? This may, frankly, be an impossible task. But Branch's hope is that this project will make people check themselves and their assumptions — and this may be the key to eradicating stereotypes of names.