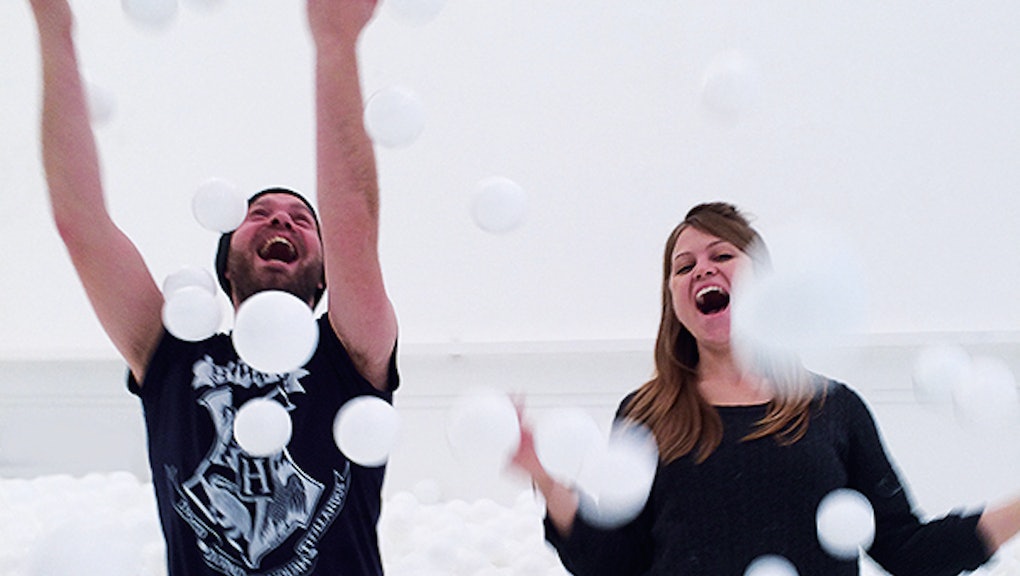 A Ball Pit for Adults Just Opened in London. Here's Why Every City Should Have One

Who says adults can't have playtime?

In December, creative agency Pearlfisher decided to test out that question. Execs created an adult ball pit, a callback to the days when our childhood selves spent hours flopping around in a room full of brightly color plastic balls while our parents shopped or talked or did whatever it is grownups do.

Pearlfisher's version, open in London through Feb. 13, is slightly different than what the kids play with. "Jump In!" features minimalistic white plastic balls instead of technicolor orbs, and it's categorized as an art installation rather than a venue for pure play.

The differences stop there, however. At its heart, it's a space for adults to play, engage in their creative sides and interact with other similar-minded adults in low-pressure environment. Basically, it's geared toward the exact things ball pits provide for youngsters.

Ball pits are the brainchild of Eric McMillan, who is considered by many to be the father of "soft play," which encourages children to learn through the use of interactive elements. According to McMillan, he installed the very first ball pit, called the "ball crawl," in 1976 at the Sea World Captain Kids World in San Diego.

The concept of "play" is a vital component for childhood development, so much so that the United Nations High Commission for Human Rights includes it in a list of children's rights. It occupies an important, if still not fully understood, space in learning, and it gives children the opportunity to explore their social, intellectual, emotional and physical capabilities.

But while the benefits are clear for children, the idea of adult play is little murkier. To better understand what it means and why the Pearlfisher's ball pit is so important, Mic spoke with psychologist Kathryn Hirsh-Pasek, the director of the Temple University Infant and Child Laboratory. She specializes in childhood play and is the author of Einstein Never Used Flashcards: How Children Really Learn and Why They Need to Play More and Memorize Less.

Mic: What exactly is "play"?

Kathryn Hirsh-Pasek: You've asked one of the deepest questions that has plagued us through history. Seriously, everyone wonders, "Can you define this? Do we have any sense of what it is?" Well, we know it's joyful. It's something that people want to do.

Generally, folks say that play doesn't have any goals. Play can take a whole lot of different forms. There can be rough-and-tumble play, there can be mental play, there can be object play. But all forms of play — they have this aura around them, where they get you sort of up and moving and they're fun and joyful. You can take more risks in play because they don't have huge consequences. For example, when you're playing in the Super Bowl, that's not really playing — that's work, even though it's a game.

Why is something like this so important for us?

For one, we have taken work into our homes as adults. We're constantly on. We have no release anymore, emotional or physical. Sometimes you just need a break from it all. You just need to go do something that is just a little crazy and certainly a lot of fun, and that may not be goal-oriented.

Across species, species play. I mean, you have monkeys who play, you have goats who play. Even babies will spontaneously play. We know that people like to pretend-play because it allows them to take on different roles, and to see the world from a different perspective. It's often social, and we are fundamentally social beings. Nowadays we hide behind screens and miss a lot of the real social interaction. And it's meaningful, in a funny kind of whimsical way.

How does play change from childhood to adulthood?

Kids need to learn a lot more about the world, and play is a very safe place to do that. In pretend play and dramatic play, they get to be who they're not. They get to test out interactions in the world, which is pretty cool. Play allows them to have emotional outlets and physical outlets.

Now, I would suggest to you that, really, adults need that too. I'm not sure that's any different as far as just sometimes wanting release and break time. We all need it.

Are there specifically adult kinds of play?

You don't want to know the answer to that question! It depends how you define it. When I invent games with friends to play in the car, really I don't have any intrinsic goal in mind — I'm just trying to find a way to do something fun.

Part of it is an attitudinal stance toward the way you approach whatever it is you're doing. If whatever you're doing is too rigid and non-flexible, it ain't play.

The ball pit is essentially placing adults in a world of child's play. What happens when we do that? How does it change things?

There are several other examples of where this happens. One is Disney World. It gives you a sense of playfulness the minute you get there. You're ready to roll, you put down your guard and you're ready to have fun.

I think we do really well in kid environments. We still like to do arts and crafts for [baby and wedding] showers. We think it's fun. I think adults love this kind of stuff, and [we] don't get enough of a chance to do it. And every single time, whether it's at your kid's birthday party where you get to do the arts and crafts, you know, play with the clay, you get into it.

Why do we get into it so much? What is it about being an adult doing something that's supposed to be for a child?

Well, remember, we were once children. It brings back wonderful memories. It's a break in the action. It says, like in the ball pit, "You're allowed to do this. We're inviting you." And that's the same invitation I get at Disney World, or places like that, like children's museums. I can engage in the fun, because I have an invitation. And somehow we've talked ourselves out of that. That, you know, we're too old. Well, I'm not too old. I want to play.

It seems like there's a bit of a stigma against adults having playtime. Why do you think that that is?

It's funny. There's a stigma in some sense and no stigma in others. Nobody has problems when we tell them it's happy hour. How come? Why can't we take the alcohol out and still have happy hour for adults? We do have these things built into our society because we need them, but we don't look at them in the same way.

There are other examples where architects have given adults a chance to play, and every single time that they have, adults play.

The positive response to the ball pit seems to indicate that there's a real need for this.

I really do believe that. I think we've become so crammed that we no longer separate our work life from our social life. We no longer take a break. And human beings need a break. We need to refurbish, replenish, reinvigorate. And we're not doing it.

For adults who can't hop the pond to the ball pit, what would you suggest doing instead?

Take recess. I mean that seriously. Go out and just have fun. If it's swimming, it if it's track — do something you enjoy. Take a break in the action. Climb a mental jungle gym. Climb a physical jungle gym. Go play catch with your kid. Play your guitar that's been sitting in the corner of your living room for 10 years.

If you really want to go crazy, buy some Play-Doh and go crazy. I think there are a lot of things we can do, but we don't do for fear that we would be leaving work and someone would notice that we're taking off.

There's a fear of looking too childish when we do things like that.

One of the things we should dissolve quickly is that fear, for a few reasons. What we're lacking is creativity: If we want to bring back creativity, it's got to be in our ability to see what we know and the things that we understand in new and novel ways.

We have, but remember that a lot of them — not all, but a lot — are constrained. Sometimes it's fun to just discover, and there's so much discovery to be done. And on our gadgets and gizmos, quite often, it was within the limits that the programmer designed in the activity that we're doing.

We learn creatively not by what somebody else thought out, but by putting together things that other people have not thought out. We learn often by having some backdrop — I'm not saying you should put peanut and butter together and put it in a blender — but we can use our knowledge to make some really cool recipes if we have the full range of discovery before us.

It seems like a great idea when you put it that way.

We're all gonna be better off if we jump on some balls. If we can't get to London, let's invent some games at home.

This interview has been condensed and edited.