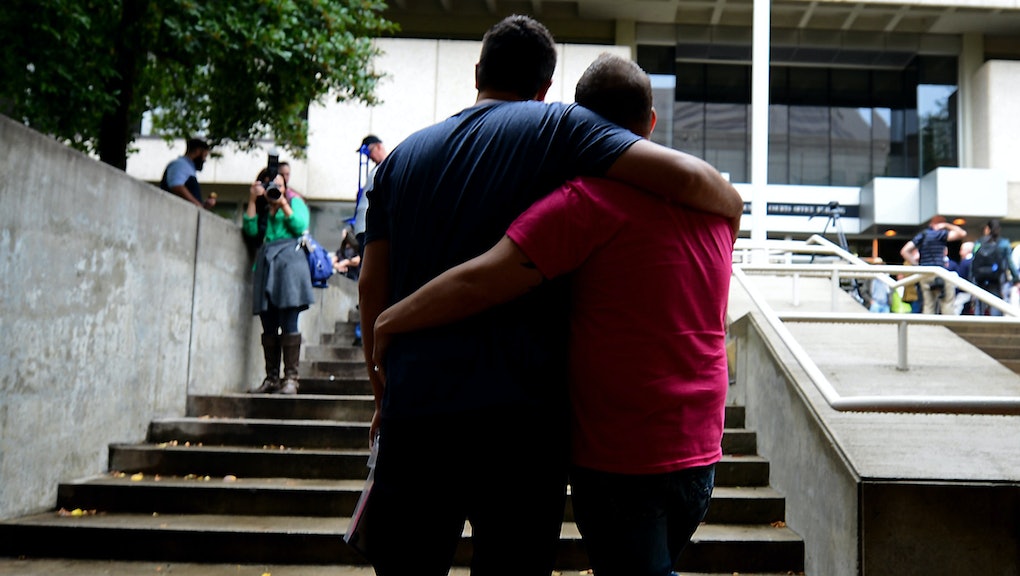 Valentine's Day is the epitome of a Hallmark holiday, full of pink and red cards and heart-shaped boxes of chocolate. But while the goodies are delicious, they don't quite capture the true spirit of the day: celebrating love.

And this past year was a big one for the L-word, with major strides for marriage equality, recognition for transgender relationships, awareness for polyamorous partners and even a revolution in self-love. Plus, Valentine's Day itself comes from the Roman pagan holiday Lupercalia, a fantastic ol' fashioned bacchanalian festival full of kink. What better time to honor progress in both love and sex?

Romance, dating and sexuality — and the conversations we're having about them — are changing. Valentine's Day should be the time we reflect upon the moments love and acceptance won the day.

Marriage equality is legal in the majority of U.S. states.

It's crazy to think that it was only 2008 when California passed Prop 8, taking a major step back for marriage equality. But here we are seven years later and Prop 8 has been repealed, more than half of the states in the union allow same-sex marriage and DOMA is finally overturned. Americans are increasingly supportive of marriage equality, as proven by the recent legal and constitutional wins. If a state like Alabama can see a gay marriage ban overturned, you know love is finally fighting the good fight — and winning.

Trans relationships are getting the recognition they deserve.

2014 was an important year for trans representation in the U.S. From the skyrocketing fame of Orange is the New Black's Laverne Cox to increased representation in media from people like British journalist Paris Lees and author Janet Mock, plenty of trans people are making waves and upsetting stereotypes. Among the positive progress was acknowledgment of trans romantic relationships, including pop culture portrayals on Sons of Anarchy and beautiful photos like the one above of Rhys Ernst and Zackary Drucker, a couple who transitioned together.

We have a long way to go — trans people are still severely underrepresented, face startling amounts of abuse, are subject to employment and housing discrimination and are hurt by high suicide rates. But beginning to accept that people of any and all genders deserve love is progress.

Dating is more inclusive than ever.

For this first time, we saw a major online dating site expand its identification roster, including various gender and sexual orientations. It was a major moment for non-heteronormative and gender-nonconforming people looking for love, since the digital dating world has long focused on the desires of straight, cisgender men and women. If OkCupid is taking the cue and becoming more inclusive, it's a good sign for where our society is moving.

Polyamory was a taboo subject just a few years ago. But as our ideas about love and sex have evolved, so have our ideas about monogamy. There's still a lot of misconception about why people seek polyamory, but there is growing understanding that consensual non-monogamy is a healthy option for those who don't subscribe to traditional romantic structures. More and more, our society is rethinking what a relationship means, what it is to love another person (or multiple people) and to commit.

Conversations about sexual desire are more open, honest and candid.

Too many people, particularly women, find themselves having to fight to claim their sexuality and own their own experiences of pleasure. The recent debate over female ejaculation only highlights the disconnect between what women experience and what's accepted by the public at large. But public dialogue, aided by platforms like Twitter and Tumblr, are starting to break down stigmas around pleasure and sex. From the trending hashtag #notpee to one woman's proud #OrgasmQuest campaign, we're honoring all sorts of sexual pleasure, sans guilt or shame.

Our concept of love finally includes self-love too.

The last few years have opened up our conversations about body acceptance and what it means to be beautiful. Women are reclaiming "fat," flaunting their "bikini bodies" and letting the world know that one's sexuality is not defined by size. Body image heroes like Tess Munster, who won praise and headlines after being signed to a major modeling agency this year, are showing women that loving yourself is one of the most important choices we can make.

While we have covered a lot of ground on the body positivity front, we've got a lot of trekking left to do. But reminding ourselves, especially women, that love means including yourself in the equation is definitely worth celebrating.