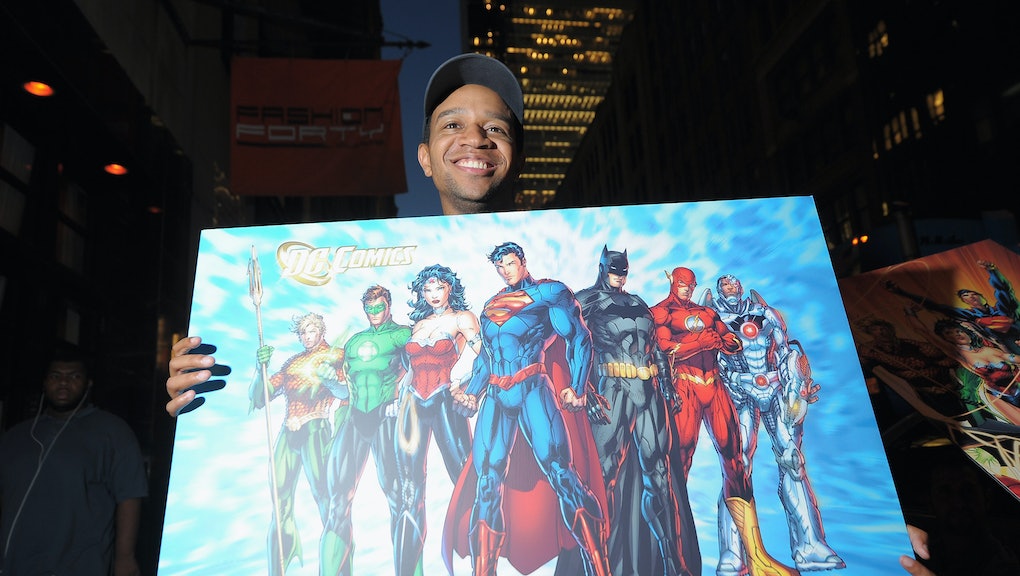 "I love your comics, but I would love them a whole lot more if there were more girls."

So notes 11-year-old Rowan, who recently penned a pretty convincing letter to DC Comics asking them what many of us have been wondering for a while now: Why don't comic books feature more female superheroes?

"I'm a girl, and I'm upset because there aren't very many girl superheroes or movies and comics from DC," she wrote in her letter, first posted on the blog of David Perry, a friend of her parents. She went on to explain how she had received Justice League Chibis, action figures like these — and discovered that only two out of the 12 characters were ladies.

But she didn't stop there. Rowan noted that the gender gap wasn't only noticeable in the action figure aisle — Hollywood is part of the problem, too. "Marvel Comics made a movie [last summer's Guardians of the Galaxy] about a talking tree and raccoon awesome, but you haven't made a movie with Wonder Woman," she noted. "Girls read comics too and they care," she concluded.

The problem is twofold. There are multiple issues with female representation in the comic book world, something that Rowan has very perceptively already picked up on.

As Walt Hickey wrote for FiveThirtyEight, "To say the comic book industry has a slight gender skew is like saying Superman is kind of strong." In fact, he goes on to note that only 1 in 4 comic book characters are female — a disparity that has been pretty much the norm for decades.

Given that comic book readership is definitely not restricted to the male half of the population, it's curious that the biggest publishers have been reticent to introduce new female characters. There have been recent efforts — Marvel recently introduced a female Thor and a new Ms. Marvel — but women are still underrepresented overall.

Of course, that's not the only issue. "It's not that there are no female superheroes," Rowan's mother, identified only as Renée, told the Daily Dot. The other problem — and the one with which Rowan seemed to take the biggest issue — is the lack of female superhero merchandise.

"In terms of what's available for kids when you walk into Target or Toys-R-Us, the superhero world looks pretty exclusively male," Renée told the Daily Dot. "That's frustrating for girls who are fans; the boys can wear their favorite superhero all the time, but to this day we've never seen a Hawkgirl T-shirt for kids."

This is a point of contention that has come up before. Fans of Guardians of the Galaxy were puzzled when they couldn't find many products featuring the (female) character Gamora, and at least one little girl decried the bizarre lack of Black Widow action figures.

What can be done? Rowan's viral letter did indeed prompt a response from DC Comics:

But it remains to be seen whether the company will actually follow through with these promises. As David Perry rightly argued, however, the letter is simply another part of the conversation, and addressing it specifically, while it's a good start, is not the final solution.

"You can roll out six or seven new shows, movies and more t-shirts," he wrote. "You can hire some women to write, do art and direct. You can invest in diversity. But if you don't destabilize the corporate culture that led you astray in the first place, that consistently de-emphasized female characters, or sexualized them, or put them only in pink and purple settings ... the new products and shows will likewise fall prey to that culture."