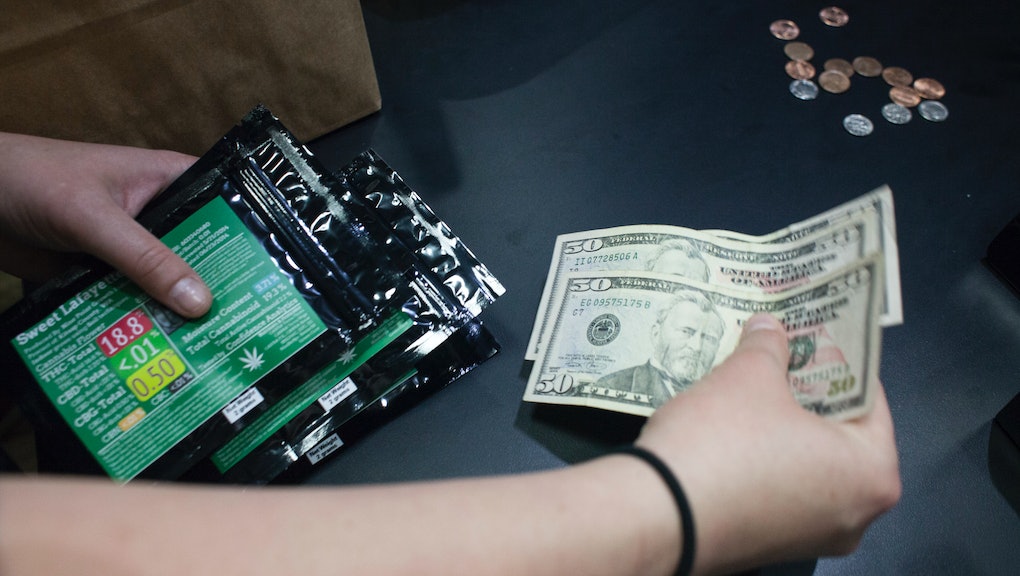 Colorado voters knew that passing Amendment 64 would raise tens of millions of dollars in tax revenue from the legal sale of marijuana. What they didn't know, however, was that some of that money would be going right back into their pockets.

According to the Associated Press, Colorado's state constitution limits how much tax money the state treasury can receive before having to return it to taxpayers. The provision, known as the Taxpayer Bill of Rights, or TABOR, requires Colorado do two things when a new tax is out on the ballot: Estimate how much money the new tax would bring in, and estimate how much total revenue the state would generate regardless of the new tax. Since Colorado's economy has been growing as a faster rate than expected, the state underestimated its total revenue, which means Centennial State residents may soon get a cut of the estimated $50 million in taxes collected from the sale of recreational marijuana during its first year of legalization.

Those taxes were originally pegged to school construction when Amendment 64 passed with 55% of the vote, which most cannabis customers applauded. "I have no problem paying taxes if they're going to schools," Maddy Beaumier, who was visiting a dispensary in Denver, told the AP. Now the state has to refund that money to taxpayers.

David Huff, an exquisitely named 50-year-old carpenter from Aurora, told the AP that the state's taxes on marijuana, which increase the price of pot by 30 percent or more, are too, um, high. "I don't care if they write me a check, or refund it in my taxes, or just give me a free joint next time I come in. The taxes are too high, and they should give it back," Huff said.

For once, Republicans and Democrats seem to agree. Both would like the state to retain the tax dollars gained from marijuana sales, despite the loophole. "I think it's appropriate that we keep the money for marijuana that the voters said that we should," Republican Senate President Bill Cadman told the AP. Although the Republican Party predictably supports returning revenue, the state's GOP leadership favors a special ballot question on pot taxes.

TABOR, passed in 1992, dictates that Colorado can't spend revenue made from taxation if those revenues grow faster than the rate of inflation and population growth. That money, known as a TABOR bonus, must be refunded to taxpayers unless voters approve a revenue change. This amendment has netted Colorado taxpayers about $3.3 billion since 1992, according to the AP. The only way to fix the refund would be to ask Coloradans to vote yet again, this time on an initiative that would exempt taxes on marijuana from the refund.

But this doesn't mean that Colorado's kicking back that pot revenue forever. According to Tim Hoover of the Colorado Fiscal Institute, a nonpartisan organization that analyzes the fiscal and economic issues facing Colorado, "The refunds of the pot tax are coming in spite of the fact that sales of recreational pot were under projections," Hoover told Mic in an e-mail.

"If the state underestimates on either estimate, it must refund all of the money from the new tax for the first year. In the case of [Proposition 64], the state underestimated by a tiny, tiny bit on total revenue, which came in higher than expected because the economy was improving faster than expected. Even so, the state now must refund all of the pot tax revenue despite the fact that it actually came in significantly under projections."

Part of the problem with those projections? Cannabis enthusiasts are still buying chronic on the black market. Colorado had estimated that the vast majority of smokers would migrate to legal marketplaces for their marijuana, but according to the Marijuana Policy Group, only 60 percent of Coloradans obtained their marijuana through a legal exchange in 2014. Some buyers are using the state's legal medical marijuana, which is untaxed, as a source for green, while others take advantage of Amendment 64's provision allowing the personal use of as many as six marijuana plants. The products of those plants have flooded the black market, depriving Colorado of more taxable pot.

If this is the biggest complication from the law, Colorado's doing fine. Governor John Hickenlooper has estimated that the state will sell more than $1 billion worth of marijuana this fiscal year. Colorado is estimated to have saved between $12 million and $40 million by freeing up law enforcement to focus on criminal activity unrelated to marijuana.

As for taxes, lawmakers are confident that voters will approve pot taxes again. "This is what the voters want," said Democratic Senator Pat Steadman, one of the state budget writers. "And if we're going to have [pot], and the constitution says it's legal, we damn well better tax it."