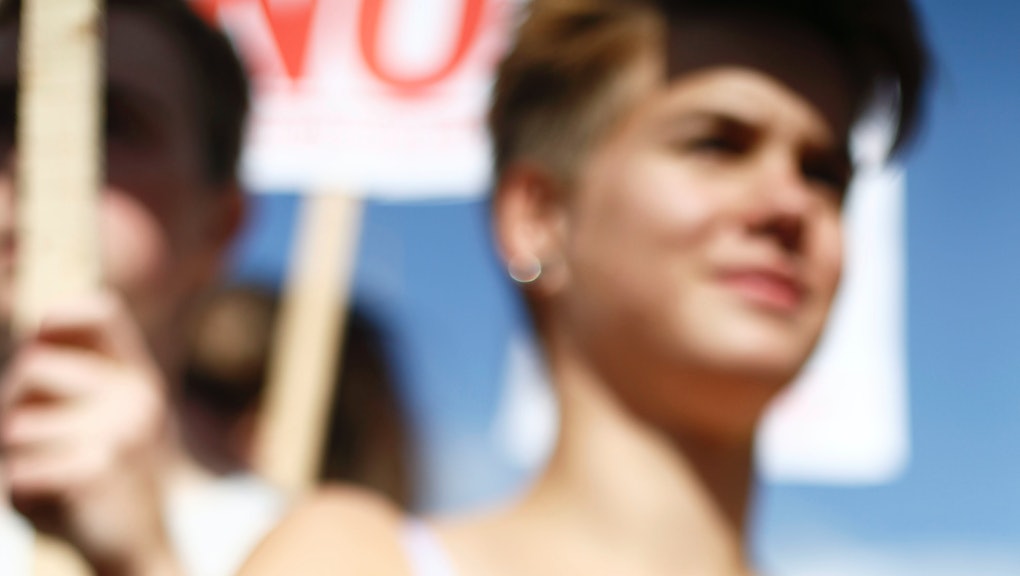 Few things are more confusing than America's relationship with sex. We puritanically disavow sexual activity, for example, yet allow erotica to dominate our screens both in public and in private. Such hypocrisy places women in an especially precarious position, as they must walk the subjective, ever-changing line between "prude" and "slut," often expected to embody purity and sexuality at once — and then chastised if they lean too far in either direction.

But while women and girls are routinely shamed for their sexuality, this practice has nothing to do with sex, regardless of how much or how little of it they're having.

Mic talked to some of the most prominent anti-slut-shaming crusaders to learn what "slut" actually means. These activists, who span three generations and various economic and social backgrounds, agree that labeling someone a "slut" is nothing more than an attempt to control women and police their personal agency.

Here's how "slut" does just that:

One of the most pervasive gender-based double standards with which women must contend is the "virgin-whore dichotomy." This paradox prescribes that women be sexy but not too sexy, chaste but never prude. Calling women sexual slurs is a way to rein them in, in a sense, by making them adhere more strictly to these boundaries or risk facing social consequences.

Leora Tanenbaum, author of I Am Not a Slut: Slut-Shaming in the Age of the Internet, further describes this dichotomy as the cultural acceptance of men as active sexual agents and women as passive recipients. Thus "even when a man and a woman behave absolutely identically [in a sexual situation], the male will be rewarded and the female will be punished," Tanenbaum told Mic. This mindset, she says, can be summed up by the adage, "Boys will be boys and girls will be sluts."

It reduces a woman to her sexuality.

Beyond being patently sexist and unfair, sexual double standards like this limit women by dismissing "everything else that makes a woman a complete, whole person, besides her sexuality," UnSlut Project founder Emily Lindin told Mic. "You can't be "a 'slut' and also a doctor and also a kind person and also a mother. You're just a 'slut.'"

The "slut" identity not only impacts women on a personal level, but it also prohibits women's progress toward equality more broadly. The amount of sex a woman has should have no bearing on the other aspects of her life, but it's easier to control women when they can be defined — and then judged — by what happens between their legs. Thus the idea of a woman actually claiming an authentic sexual self is seen as "somehow threatening and as out of control," Lindin said.

It's a way to silence outspoken women.

Regardless of their actual sexual activity, outspoken or powerful women regularly are labeled "sluts" on everything from public media to personal social networks. Tanenbaum said there is "so much discomfort and anxiety over the idea of girls and women being in control, being agents, having power" that deriding them as sluts is "a way to police them."

Take, for example, prominent conservative figurehead Rush Limbaugh's attack of Sandra Fluke. Because Fluke spoke in favor of women's basic right to access birth control, Limbaugh attempted to silence her by calling her a "slut" and a "prostitute."

Fluke was talking about something related to sex, but the subject at hand doesn't make a difference — a woman's sexuality is still often the main point of attack. According to the StopSlut Movement, the youth-centered anti-sexual bullying organization led by Katie Cappiello and Meg McInerney that created the recently published SLUT, this is a type of backlash teens know well. One such teen told Mic that she was called a slut for saying that Grand Theft Auto 5 glamorized violence against women; another was labeled a slut for cursing.

It turns women against one another.

Using accusations of sluttiness as a tool to curb others' voices isn't just wielded by men against women. Women slut shame other women too. Tanenbaum said girls label other girls sluts as a "protective measure" — that is, a way to deflect pressure from or elevate themselves. Calling a female peer a slut also "takes away that girl's power and gives it to you," according to the StopSlut team. "You're the one declaring her worthless, and that makes you powerful."

It's used to justify sexual harassment and violence.

"If a girl is seen as a 'slut,' the implication is that she cannot be raped," Lindin told Mic. "This works on an individual level, in that her rapist uses his opinion of her to justify his actions in the moment, but also on an institutional level, in that if she chooses to report, her sexual history will come up as a way to discredit her account."

Tanenbaum agrees, telling Mic that because reporting an assault is an undeniable act of agency, the default response is to undermine that act of empowerment and to doubt and discredit the individual. This is why we insist survivors "must have done something to provoke that assault" says Tanenbaum, and suggest "that either she wasn't really assaulted at all, that it wasn't coercive — or that it was coercive but who cares because she's a slut and was behaving inappropriately in the first place."

One teen cast member of SLUT experienced this personally. At 14, she was sexually assaulted by her doorman. When she spoke out, the other tenants of her apartment building not only sided with the doorman but paid his legal fees and shamed the teen as a "short-shorts wearing, midriff baring, flirtatious slut," according to Cappiello, who relayed this story. "Her 'sluttiness' justified his behavior," she told Mic, and "even more accurately, solidified his innocence."

It's a way to justify racism.

Though slut shaming impacts women of all backgrounds, African-American women have a particularly fraught history with the concept. Whereas white women may only be given two options for their sexuality — virgin or whore — black women often aren't afforded even this choice. "Black women have always been labeled as hypersexual beings unworthy of respect, love and justice," Lutze B. noted in Salon. "'Slut' is the default position of black women."

The concept of sluttiness is undeniably racialized based on the legacy of slavery, in which black women were denied ownership of their own bodies and seen as available for domination. We're still feeling the effects of such thinking today: One 18-year-old member of StopSlut said, "As a black young woman, I'm sick of it all. I feel like our bodies and the image of black women in general have been culturally fetishized and slutted for centuries, and it gives people the permission to be racist toward us and to treat us without respect. It feels like we're hated."

Black women aren't the only racial minority that face racism tied to their sexuality. Asian women are also sexually stereotyped in ways that expose them to sexual harassment and violence. "It's like guys think I'm gonna be their obedient geisha girl or subservient China doll," said one 15-year-old StopSlut activist. "I'm not their anime fantasy, you know? And even white female friends of mine will comment on how all guys love Asians."

Latinas notoriously face sexualized stereotypes based on their race as well, such as being called "fiery" or regarded as inherently more sexual than other women. Feminspire quoted Tu Vez writer Jack Thomas saying, "When white women are prostitutes, they are usually the 'hooker with a heart of gold' ... when a Latina is a whore, she's just a slut."

Talking about slut shaming is about so much more than one's personal sex life or petty interpersonal insults. Slut shaming reflects broader systems of power that continue to demean and harm women and prevent us all from achieving true gender equality.

That doesn't mean it doesn't sting. A culture that primes women to internalize their own sexual objectification, values their bodies and sexuality over their intelligence and opinions and punishes those who transgress a sexual narrow norm is undoubtedly harmful to the fight for progress.

Luckily, there are courageous activists educating the world through powerful documentaries and plays, books and speeches. Let's listen. As the wise teens featured in this piece encourage us to do, let's "stop slut" today.