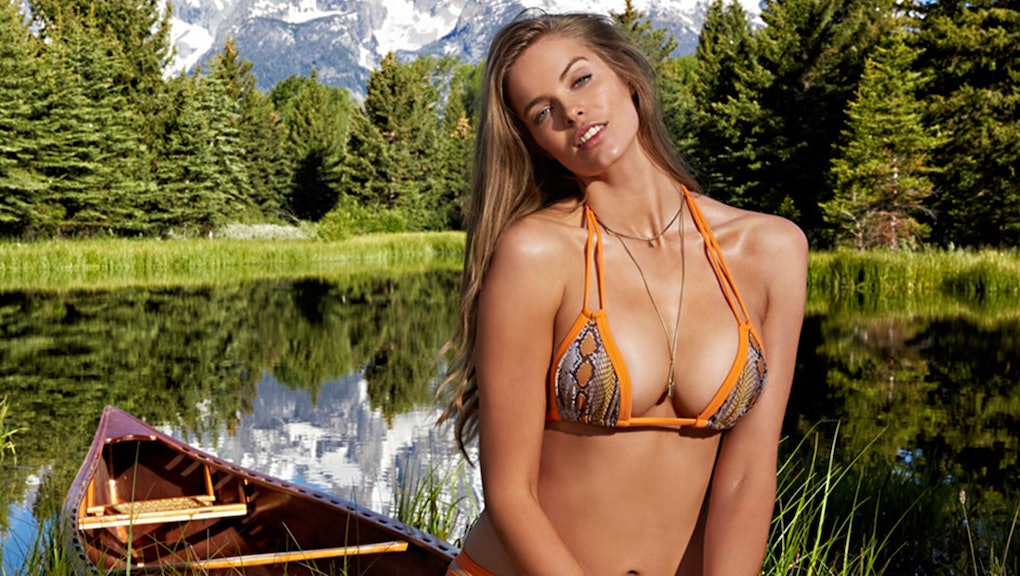 'Sports Illustrated' Is Going Body Positive for the First Time Ever

This year's annual Sports Illustrated Swimsuit Edition is out, and it's finally recognizing that women with curves are sexy, hot and in-demand — proving that they've learned a thing or two about the body positive movement.

On Thursday, model Robyn Lawley revealed in a tweet that she has been named a "Rookie" in the forthcoming issue, making her SI's first plus-size swimsuit model. Not only that, but she's wearing a swimsuit from the collection she designed — and she was in the first trimester of her pregnancy during the photo shoot.

Lawley, who wears a size 12, actually appeared in last year's Swimsuits For All remake of the 2014 SI cover featuring plus-size models. Her inclusion in this year's issue shows how far the culture has come in terms of body acceptance and body diversity.

Earlier in the week, plus-size model icon Ashley Graham also made headlines for appearing in the issue in a Swimsuits for All #CurvesInBikinis ad campaign.

First and foremost, Lawley's a model. While she understands the significance of her inclusion in the issue, Lawley maintains that she is primarily a model. "I don't know if I consider myself as a plus-size model or not," Lawley said in an interview with Time, in acknowledgement that the average American woman wears a size 14. "I just consider myself a model because I'm trying to help women in general accept their bodies."

"When I started my career 10 years ago," she continued, "I had to painfully go to castings and people would look at you and say, 'What the hell are you doing here?' ... I want to be there for the regular girls who are my size."

This hasn't prevented media blowback about the choice of Lawley for the issue. Critics have pointed out that the magazine still promotes women's objectification; Lawley suggestively straddling a canoe arguably substantiates that point. The Daily Beast, for example, called out SI for its faux-challenge of beauty standards.

"There is no editorial suggestion here that women can be both fat and beautiful, only that they can be large and beautiful — a slight but significant distinction for the many women who struggle to be represented in print or on screen," Samantha Allen wrote.

The criticism has also extended to social media, with charges that Lawley isn't plus-size or plus-size enough:

Technically, and by industry standards, Lawley is plus-sized, but this hasn't stopped people from harshly — and hypocritically — judging her. It is the unfortunate consequence of being the token — no single person can represent an entire community, so criticism is inevitable because people feel unfairly or inadequately represented.

Lawley's "Rookie" status is a historic moment in the mainstream inclusion of body diversity. The contentious debate about her plus-size status is a false one, resulting from the problems inherent in tokenism and the fact that one person cannot adequately represent women of all sizes. Perhaps it then becomes a problem of the media's framing and fascination with the plus-size trend, which is why Lawley voiced a reluctance to consider herself a plus-size model.

Lawley knows she isn't Everywoman — and that's the point. Critics should consider that, and while it's a small step, it's a step in the right direction to a more diverse media landscape.