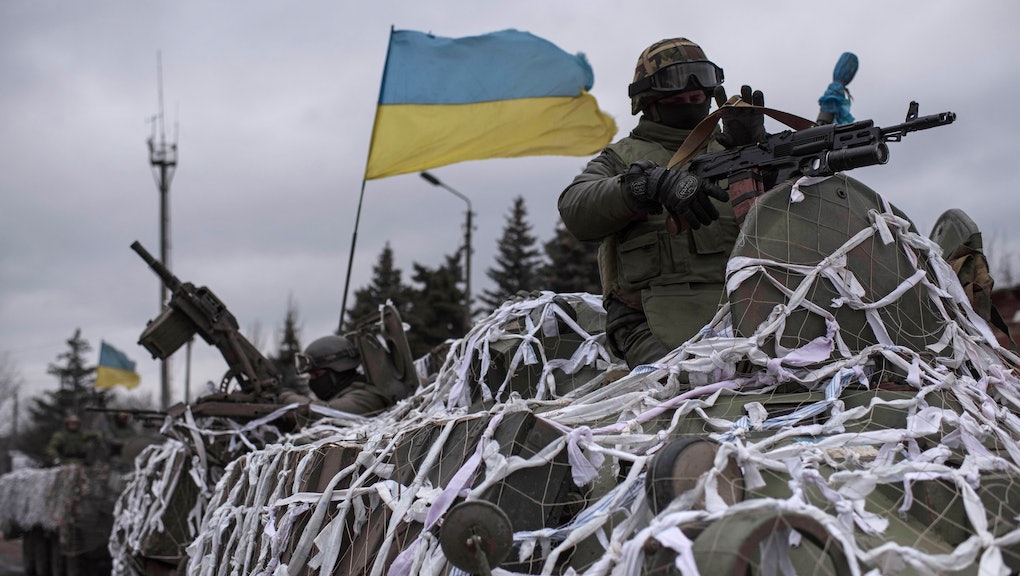 While No One Was Looking, Tensions in Ukraine Reached an All-Time High

The yearlong armed conflict in eastern Ukraine between government security forces and Russia-backed rebels has reached one of its tensest points yet.

Reuters reports that the leaders of Russia, Ukraine, France and Germany will meet Wednesday in Belarus in what might be the last possible attempt to secure a cease-fire before a "dramatic spiral" that renders peace impossible.

Ukrainian President Petro Poroshenko said he hoped the meeting would produce a "swift and unconditional cease-fire" in eastern Ukraine, where the U.N. estimates the death toll has risen to an astonishing 5,358.

The negotiations come at a critical time. Separatist advances into Ukrainian territory have been gaining pace, while a recent report by major U.S. think tanks urged President Barack Obama to begin arming Poroshenko with $1 billion in weapons annually through 2017. Unless something changes quickly, the situation will only get more heated.

They also come at a time when public interest in the conflict is much lower than it was last year. As the stunning drama of 2014's massive anti-government protests and Russian annexation of Crimea fades, search trends show that many members of the public have simply lost interest even as fighting intensifies:

The background: After Ukrainian President Viktor Yanukovych signed a major economic deal with Russia in early 2014, protesters furious about his administration's decision to cement strong relations with Vladimir Putin rather than encourage stronger ties with the European Union forced him out of office. The result was a new regime headed by former Minister of Foreign Affairs Petro Poroshenko and a commitment to resisting Russia's sphere of influence.

The new government in Kiev soon found itself at odds with pro-Russian separatist rebels in the eastern half of the country who declared independence. At the same time, troops in unmarked uniforms, widely believed to be Russian special forces, stormed the strategically important Crimean peninsula, orchestrated a show referendum and annexed the area into the Russian Federation.

A cease-fire was announced in September, but never took hold. Civilians have died in artillery strikes, bombings and crossfire between the poorly equipped Ukrainian military and the rebels, whom Putin has supplied with high-end military equipment.

The response of the West to all this was a consensus that Russian aggression was endangering regional stability, the European Union and the U.S. organized sanctions that experts say first weakened and are now having a severe impact on the Russian economy.

Earlier this month, Reuters reported that Poroshenko claimed to have evidence that Russian troops were openly fighting alongside separatist rebels, supporting them with mechanized infantry, tanks and mobile artillery. "If this is not aggression, what is aggression?" Poroshenko said.

What's at stake now: It's unfortunate that public interest in the crisis has faded because what happens next may have the single biggest impact on the trajectory of Western-Russian relations of any event in recent memory.

The European leaders organizing the current round of talks, French President Francois Hollande and German Chancellor Angela Merkel, hope that they can still reach some sort of deal between Russia and Ukraine that will result in a lasting (if uneasy) peace. If they fail to produce any credible agreement, then congressional pressure will mount on Obama to go one step beyond sanctions and provide Ukraine's outdated military with new weapons.

"The problem is I cannot imagine a situation in which an improved arming of the Ukrainian army leads to President Putin being so impressed that he believes he will lose militarily," Merkel said at the Munich Security Conference, according to Bloomberg. "This cannot be won militarily. That is the bitter truth. The international community must think of something else."

Meanwhile, Bloomberg reported that a skeptical Vice President Joe Biden said that the U.S. didn't support a military solution but that "too many times President Putin has promised peace and delivered tanks, and troops, and weapons." The Obama administration is now beginning to seriously rethink its stance on arming Ukraine, although it is strenuously avoiding actions that could escalate the conflict further. On Thursday, Russian foreign ministry spokesman Alexander Lukashevich warned that any American arms shipments to Ukraine would cause "colossal damage" to U.S.-Russian relations.