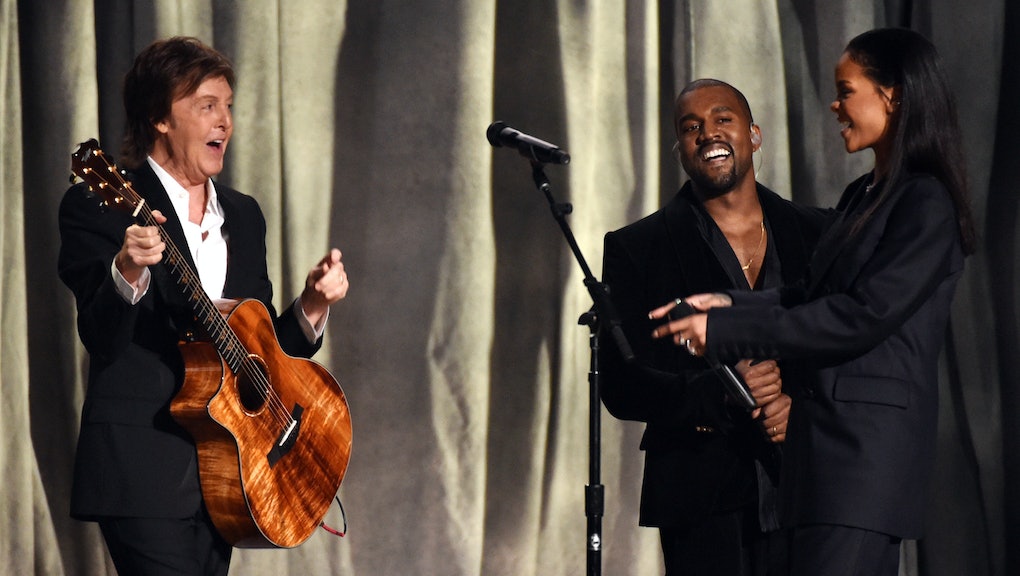 Rihanna, Paul McCartney and Kanye West Were Pop's Most Unlikely Trio at the Grammys

Sir Paul McCartney joined Rihanna and Kanye West to sing the trio's hit "Four Five Seconds" at the awards show Sunday night. They might be the most unlikely pop trio in music history, but they were an absolute joy to watch.

The performance echoed the stripped-down aesthetic of the song's new video, which dropped Wednesday. "Kanye came up with the idea of doing just this street-denim all-American type look," Rihanna said in a behind-the-scenes interview from the set. "That's the look. That's the fashion tip... Denim never goes out of style: It's classic, it's iconic, just like the fucking Beatles."

The trio classed it up a bit for the Grammys, swapping out the denim for some black suits. But their sound was as iconic and badass as ever. Kanye apparently flipped off the crowd while storming off the stage. That's rock and fucking roll.

The song offers a refreshing departure from all the extraordinarily overproduced and dense pop we usually hear clamoring towards the Top 10. It's reintroducing pop audiences to the minimal production styles of '60s and '70s pop, while mixing in modern lyrical styles and new technologies like autotune. We're just starting to feel its impact: This past week "Four Five Seconds" shot from No. 54 all the way to No. 15. The trio will be rounding out the top 10 soon.

We may be set to hear a lot more fascinating songs like this soon. Sources close to West claim he and McCartney have nine songs written and set to go. West also announced on the red carpet he'd be executive producing all of Rihanna's upcoming album. With McCartney and West lined up behind her, Rihanna all the ingredients in place to make her R8  her most innovative and mind-blowing yet.