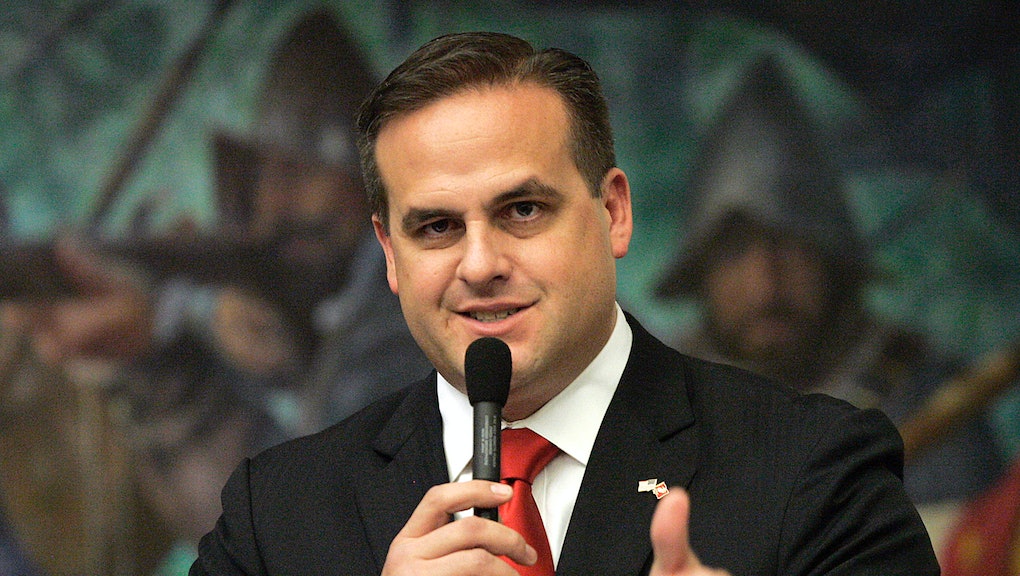 He's a Miami Republican in the Florida legislature who thinks that using a restroom is a choice — especially if you're transgender. That's why he feels no compunction about his introduction of the Single-Sex Public Facilities Act, a law which would make it a crime for transgender people to use single-sex public bathrooms that correspond with their gender identity in restaurants, workplaces and schools. "Violators" face a $1,000 fine and up to a year in jail.

Artiles doesn't get what all the fuss is about. "People are not forced to go the restroom," he said in an interview with BuzzFeed. "They choose to go to the restroom."

The law, which "prohibits knowingly and willfully entering single-sex public facility designated for or restricted to persons of other biological sex," was ostensibly written not to target Florida's transgender community (which, as of December, is legally protected from discrimination, at least in Miami-Dade County) but at a "loophole" in the transgender rights ordinance that supposedly protects sexual predators.

The bill is "not to attack transgender people or make their lives difficult," Artiles told BuzzFeed, although he has gone on the record with the Miami Herald that his bill is a direct response to the discrimination ordinance, which, he alleges, "gives the cover of law for people who use this as a loophole for voyeurism and other criminal activity. While I understand the good intention, it is overly broad."

"You have sexual predators — you have people who are going to use these local ordinances as cover," said Artiles. "I want uniformity across the board, and not laws subjective to the way people feel."

This isn't the first "bathroom bill." In 2013, a proposed bill in Arizona (why is it always Florida and Arizona?) would have allowed police to stop anyone suspected of using the "wrong" bathroom and demand identification. Had the bill not been defeated, violators would have faced a $2,500 fine and up to six months in jail. Earlier this month, a Colorado bill that died in committee would have banned transgender students from accessing changing rooms. In Kentucky, the currently proposed Kentucky Student Privacy Act would allow students to sue their school if they encountered a transgender person in the "wrong" bathroom.

In each case, the stated reason for the proposed law is to protect women and girls from sexual assault by men feigning a trans identity as a way to sneak into women's restrooms. "A man such as myself can walk into the bathroom at LA Fitness while women are taking showers, changing, and simply walk in there," Artiles told the Miami Herald. "Someone can say, 'What are you doing there?' Under the [transgender protection] ordinance, I don't have to respond. It's subjective. If I feel like a woman that day, I can be allowed to be in that locker room. I don't know about you, but I find that disturbing."

53% of trans individuals have experienced harassment in public accommodations (bathrooms, locker rooms, hotels, restaurants) and 10% report having being physically assaulted.

"Bathroom bills" just make trans peoples' lives more dangerous. Whether or not Artiles finds such a hypothetical "disturbing," there is no documented case of such an occurrence anywhere in the United States. Artiles told reporters that the recent anti-discrimination ordinance has resulted in just such incidents in Miami-Dade County, but he was unable to furnish evidence to BuzzFeed.

While the question of whether Artiles' nightmare scenario even exists is up for debate (Conclusion: It really doesn't) the law ignores the actual dangers that arise when transgender people attempt to use the facilities that comport with their gender identity: Violence committed against transgender people.

According to the National Transgender Discrimination Survey, a report surveying more than 6,000 American transgender people, 53% of trans individuals have experienced harassment in public accommodations (bathrooms, locker rooms, hotels, restaurants) and 10% report having being physically assaulted in public. Forcing trans women to use bathroom facilities inconsistent with their gender identity doesn't protect anyone — it just puts trans women at risk of being harassed and assaulted by men. Not to mention the danger this law creates for parents of young children: According to the proposed bill, a father could not take his young daughter into a restroom, nor a mother her son. Artiles is asking parents to send their children unaccompanied into bathrooms with perfect strangers, and threatening them with jail time if they don't comply.

The bill's a sham. Using fear and transphobia to pit women and girls against transgender people doesn't solve the problem of sexual assault — it minimizes it. Rather than address the actual sexual assault crisis facing America's women (including on Florida's college campuses) Artiles is creating a trans bogeyman to deflect the issue and pin the problem on a politically unpopular and socially marginalized group of people. If Artiles is really serious about minimizing the risk of assault Floridians face in public facilities, he would push for a bill requiring gender-neutral bathrooms in all public spaces, a policy that many of America's colleges and universities have already embraced.

Want to tell Rep. Artiles what you think of the bill? Here's his contact information: