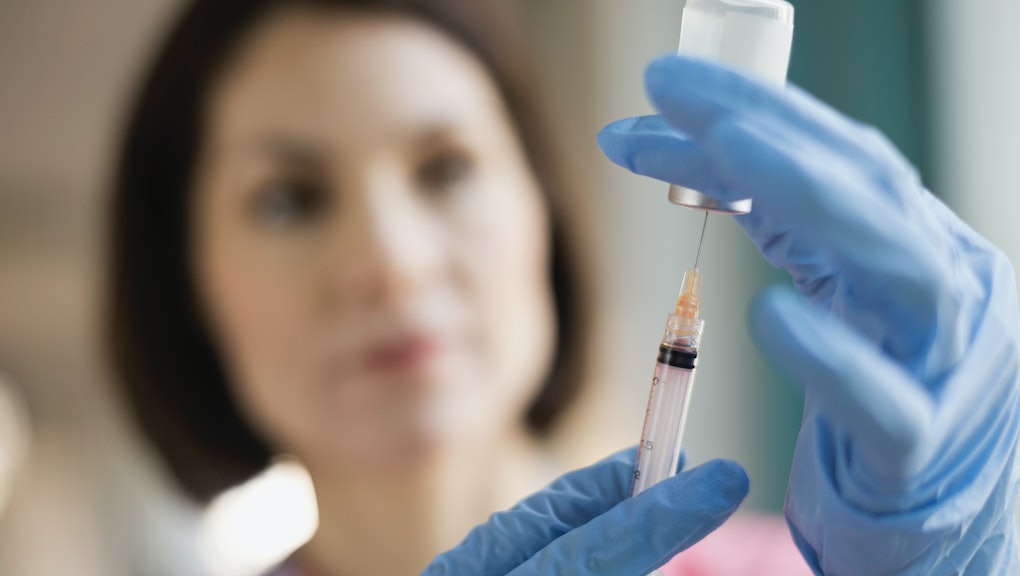 There are more than 1,000 people in Karen's online genital herpes support group. Karen, a 40-something woman from Louisville, Kentucky, got herpes about four years ago from an unfaithful boyfriend who unwittingly passed it on. Karen isn't her real name, but she asked for anonymity out of professional concern. Anti-discrimination laws notwithstanding, she worries about a potential employer coming across her name near the words "genital herpes."

As of now, that would be hard to do — her invitation-only group is tough to infiltrate. Karen is leery of trolls looking to out people and spread lies about treatments that may or may not exist. In general, the genital herpes community, Karen says, mostly operates underground. It's like the Skull and Bones of the infectious disease patient universe.

Given the enormous stigma surrounding herpes, it's not surprising that sufferers aren't an out-and-proud bunch. The Centers for Disease Control and Prevention estimates that 1 in 5 American adults (50 million people) has genital herpes (HSV-2), though most are blithely unaware. The virus has earned a reputation as a "silent epidemic," both because so many people unknowingly contract and transmit it, and because it's not a condition that inspires a lot of public discussion or advocacy. How often do people run 5Ks for herpes?

It's become common to dismiss the venereal disease as an overblown social affliction rather than a real disease. But herpes sufferers are not onboard with that narrative. For Karen, and up to 2 million other people in the U.S., herpes is a chronic condition that comes with some combination of painful skin blisters, flu-like symptoms and nerve pain. It's tricky, Karen says, to reconcile depictions of herpes as both an exceedingly common issue that shouldn't cause shame and one that still merits immediate money and attention. She's focused on the latter concern.

With infection comes a host of potential complications. Herpes of the eye is the leading cause of infectious blindness in industrialized nations. Babies who contract neonatal herpes can experience anything from a lifetime of cold sores to, in rare cases, fatal brain infection. Having herpes makes it easier to contract HIV. And, if we don't moralize sexual activity, it's hard to see why we wouldn't want sex to be less risky than it already is.

A lot of people — the herpes community, infectious disease experts and others who'd like one less reason to fear skin-on-skin contact — demand a vaccine get on the market. But after three decades of failed experiments aimed at developing one, we still don't have it.

One doctor, however, is sure he knows the solution. His name is Bill Halford.

Halford is an immunologist who's devoted his career to herpes vaccine research. The reason we don't have a herpes vaccine, based on his experience, has nothing to do with science: It's a narrow-minded approach towards research. Halford believes the solution lies in revisiting an old-fashioned vaccination method: injecting a minuscule amount of the live herpes virus to stimulate immunity against it. Unfortunately, Halford says, the government won't put money toward it.

Herpes is an ancient disease. Compared to the way some sexually transmitted diseases, like HIV, flared up, the epidemiological history of herpes simplex II has been a slow burn. The earliest mention dates back to Ancient Greece, when Hippocrates wrote about blisters. The first book about herpes came from French doctors in the 1880s. The virus didn't start to hit epidemic levels in the U.S. until the late 1970s, when rates of "An Incurable V.D. Called Herpes," as People reported in 1979, began to pick up.

As far as herpes vaccines go, Halford distinguishes between two broad categories. The first type (which he endorses), called a "live, attenuated vaccine," uses a weakened version of the virus, which stimulates the immune system to build up antibodies that protect against future exposure to the disease. The drawback of this approach is the possibility of people contracting a virus from the vaccine itself, which can happen when people are immunocompromised or the vaccine is not quite weak enough.

The second type, called a subunit vaccine, uses just a (non-live) fraction of the virus' DNA to target one or two specific antigens in the virus. Once subunit vaccines became available in the 1970s, the U.S. quickly embraced their use, according to Halford. Yet the past 30 years, by Halford's count, have seen six subunit herpes vaccines fail in clinical trials. We've been at a standstill for too long, Halford says. It's time to change tactics.

So why aren't more researchers in Halford's camp?

Because people are concerned that attenuated vaccines can mutate and cause infection rather than immunity. The subunit strategy is appealing because there's no real chance of adverse infection from vaccination. According to Halford, however, subunit vaccines are only strong enough to combat weak-to-moderate pathogens. The HPV vaccine Gardasil, for example, is an effective subunit. But herpes, which makes itself at home deep in the body's nerve cells, is a large and stealthy virus. And the safety concern, Halford says, is overblown and outdated. He's confident he can create a live, attenuated herpes virus that won't backfire.

It's reasonable for non-experts to bristle at the possibility of a vaccine backfiring and favor a more conservative approach. That's where people like Karen, who has no public health background, come in. Once herpes became part of her life, she immersed herself in the science of the STD. Karen describes her herpes support group as a family — although she's heard people favor the term "cult "— in which everyone has their role. Karen's a research liaison. She helps people understand the nitty-gritty details of promising trials and the meaning of b-and t-cell responses with the passion of, if not an expert, at least a devoted herpes hobbyist.

The herpes community has up to 10,000 members, Karen estimates. Overlapping group participation, as well as anonymity, makes it hard to provide a specific number, Karen said. Niche herpes groups, of which there are many, focus on topics, like pregnancy and "the talk," as well as identities, like Russians and lesbians. Karen's suspicious of some sites, including HerpesZoster.com, for attracting "crazies" looking to expose people in the community. She's not sure what motivates these egregiously mean-spirited strangers, but suspects that revenge is a factor. Most people Karen knows got herpes after someone lied to them, which contributes to the community's adamance about disclosure.

Opinions on dating, however, run the gamut: Some people are staunch about keeping romance in the family (virally speaking), Karen said, while others see such self-selecting behavior as a path to more baseless stigmatization. Regardless, social support groups are popular and active, especially among 20-somethings who get diagnosed with herpes before they age out of booze-fueled, IRL fun. Karen isn't involved in the herpes social scene, but thinks it's a vital component of the community, especially since an atypically high number of people with herpes are single, Karen explained.

Unless specified, vaccines are preventive — they protect people who don't have a disease from contracting it. A therapeutic herpes vaccine could help the herpes-positive in a few different ways, including by delaying the onset of an outbreak or reducing the likelihood of having one. It could also make someone less infectious. The two methods of inoculation aren't necessarily mutually exclusive.

Clinical vaccine trials aren't cheap or easy to run, a burden that keeps researchers under the thumb of the Food and Drug Administration, the National Institutes of Health and other government grant-funding agencies. By Halford's account, the government funnels money into the same few institutions. Intended or not, the system is resistant to change. In Halford's words, the government has been playing grab-ass with researchers for three decades, and it's not going anywhere.

"When people fail at a test for 30 to 40 years," Halford said, "other people assume that it's not possible, rather than seeing it as a lousy attempt. One of the critical issues in science, generally, is to determine that something is, in fact, possible."

Some people might automatically root for a dissident like Halford who, by his own admission, wants to stick it to the FDA. Other people may be inclined to trust government-endorsed research, whether or not pharmaceutical companies are pulling the levers.

"I've looked at a lot of the vaccines," said Karen, "and Halford seems to be the strongest candidate out there, and he's very honest. I appreciate that... But it takes $300 million, I think, to get a drug to market. "

Halford isn't working off concept alone. He's tested his own live, attenuated herpes vaccine on mice and guinea pigs, both of which he says are valid models for measuring potential efficacy. He's published several papers on his work. But the next step, human clinical trials, is rather pricey. After years of denied grant requests, Halford decided it was time to go rogue. Though he won't offer specific details, he said he's secured enough money from private investors to run a clinical trial. He's testing his vaccine therapeutically (on people with herpes). If all goes well, he thinks he may have a vaccine developed by the end of 2016.

Plus, Halford argues that we have a good precedent for an effective and safe live-attenuated herpes vaccine: the chicken pox vaccine. Herpes and chicken pox (technically called varicella) share 60% of the same genes. The chicken pox vaccine came from Japan, Halford explained, which began administering it in the '70s. More than a decade later, the pharmaceutical company Merck bought the patent. In 1995, American kids started getting shots instead of pox.

In a 2013 Slate piece on chicken pox parties and vaccination, Melinda Wenner Moyer wrote, "I know that it's tempting to think, 'That's silly; I didn't have the vaccine, so my kid shouldn't need it either.' But you might as well be saying that your kid has no right to a healthier, safer world than the one you grew up in — and that sounds far sillier."

Chicken pox had some morbidity rate before vaccination began, but it was low — about 100 kids a year, Wenner Moyer reported, most of whom had existing autoimmune issues. Still, pre-vaccine, 10,000 kids went to the hospital each year due to illness complications. As anyone 25 and up probably recalls, most kids got the infection (and were A-O.K.), which was preferable, since those who didn't became susceptible to developing shingles as adults. Chicken pox, like herpes, is more of a scourge on the health of a population than individual people. But the promotion of collective well-being is a big part of why we vaccinate.

People have told Karen she saved their lives by bringing them into the community. One woman felt traumatized after a rape left her with cold sores. Others buckled under the onslaught of misinformation. Some didn't know how to re-enter the dating world. The herpes community is undoubtedly a boon to the lives of its members.

As dedicated as Karen is to supporting research, she's not sure the community will ever become powerful in the outside world — not with the stigma. No one's going to rally outside the FDA, she says. Well, it is fitting: a strong but hidden community united by a disease of equal force and subtlety. Maybe a voice like Halford's is enough to make herpes a thing of the past.