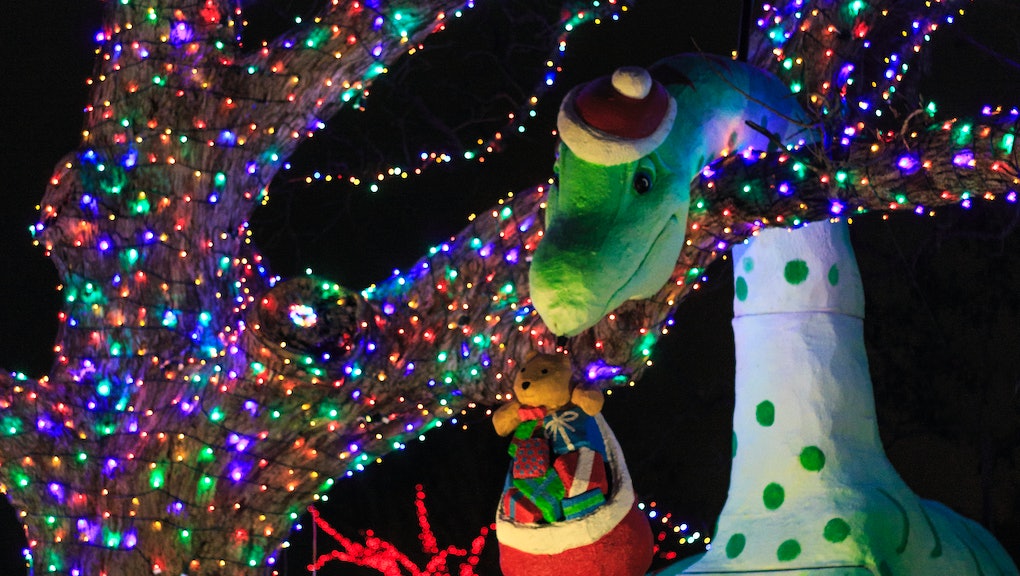 Dinosaurs Were Probably Tripping on Hallucinogens Most of the Time

Big news on the paleontology front: Researchers from Oregon State University have discovered a perfectly preserved sample of grass trapped in 100-million-year-old amber in Myanmar, by far the oldest of its kind. But even more curious was a small growth attached to the grass, which the team discovered was quite similar to the modern-day ergot fungus.

Ergot is famous for causing severe symptoms like hallucinations, convulsions, gangrene, mania and psychosis — and it seems that one of its earliest ancestors was flourishing during the heyday of the dinosaurs in the early- to mid-Cretaceous period.

Thus, the last thing some unfortunate herbivores may have seen before they died was a whirling, fractal blur of raptor claws or carnosaur teeth.

Pack it up, paleontology. You've peaked.

The science: Ergot preys on cereal grains, in the process producing a chemical called ergotamine that drug resource Erowid describes as a "potent vasoconstrictor and precursor to LSD." Consumption of ergotamine can induce a medical condition known as ergotism, ergot poisoning or St. Anthony's Fire, according to University of Bristol professor Paul May. As May also notes, LSD discoverer Albert Hoffman originally synthesized the compound in 1938 while experimenting with a molecule known as lysergic acid isolated from ergot alkaloids.

The discovery of the amber, published in the journal Paleodiversity, provides a fossil record for ancestral grasses millions of years earlier than previously established. It also demonstrates that psychedelic fungus likely existed in the Old World, where it could have given herbivorous dinosaurs a very bad day.

Fossilized feces (coprolites) have already established that sauropod dinosaurs ate grass at least as early as the late Cretaceous period (71-65 million years ago). The newly discovered fungus, Palaeoclaviceps parasiticus, might have gone down the gullet along with it.

"It seems like ergot has been involved with animals and humans almost forever, and now we know that this fungus literally dates back to the earliest evolution of grasses," OSU scientist George Poinar Jr. said in a statement on the university's website. "This is an important discovery that helps us understand the timeline of grass development, which now forms the basis of the human food supply in such crops as corn, rice or wheat. But it also shows that this parasitic fungus may have been around almost as long as the grasses themselves, as both a toxin and natural hallucinogen."

"There's no doubt in my mind that it would have been eaten by sauropod dinosaurs," he says, "although we can't know what exact effect it had on them."

What about the dose? Poinar told Pacific Standard that it is unclear whether massive sauropods could have consumed enough of the fungus to trip major balls. "We can look and see what ergot does to lizards and birds today — and it does have an effect on them," he said. "But whether this occurred in dinosaurs, we just don't know. We don't know how much they would have had to eat."

In contrast, humans can easily fall victim to ergotism. According to blogger Ian Chadwick, milled ergot goes easily undetected in tainted rye flour thanks to their similar coloring. That might explain why it's associated with periodic, massive outbreaks of St. Anthony's Fire dating back to the year 857 and why the correlation wasn't discovered until the 1850s. Ergot poisoning has been linked to everything from the hysteria before the 1692 Salem witch trials to the 1951 mass poisoning of the French village of Pont-Saint-Esprit (which some believe to have been the result of CIA weapon tests).

Ergot poisoning might seem scary, but today it mostly affects livestock. A hundred million years ago in the Cretaceous jungle, though, it may have been sending an unlucky sauropod on the original bad trip. Chris Pratt riding motorcycles with velociraptors seems kind of tame compared to that.