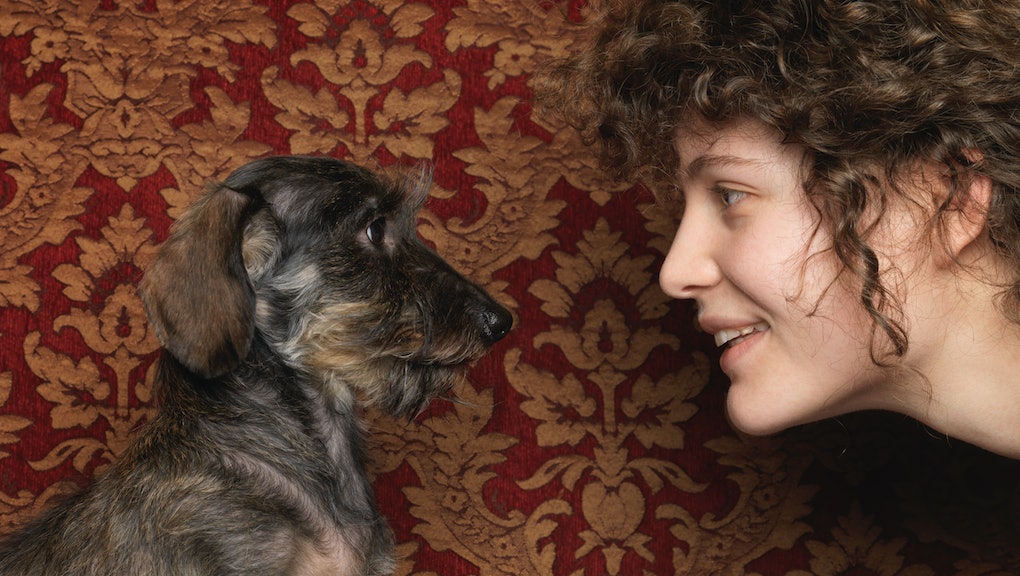 Science Shows Your Dog Knows More About You Than You Thought

Sometimes it seems like dogs get us, and our fluctuating moods, better than members of our own species. But we're just projecting a heightened level of emotional intelligence onto our canine companions, right? Not necessarily. A study published Thursday in Current Biology says dogs may indeed understand what it means when we frown or beam. Researchers from the University of Veterinary Medicine Vienna tested dogs' ability to read human facial expressions and found they could reliably discriminate between happy and sad faces.

The study: Researchers split study subjects (pet dogs) into two groups. They showed all the dogs photos of a person's face bearing different expressions. They trained one group of dogs to get treats when they saw happy faces. The other group of dogs got rewarded when they responded to angry faces. The photos, however, only showed half of each face.

The dogs then had to repeat the task in response to different sections of other people's faces, including those of their owners.

"Basically," Corsin Muller, one of the study authors, told Mic. "We were asking the question: Do they realize that happy eyes mean the same thing as a happy mouth?"

So, to get a treat, for example, a dog in the happy group had to recognize "happy" based on just a pair of excited eyes or toothy smile.

Across the board, the dogs delivered. Both groups successfully recognized "happy" and "sad" in multiple, slightly different experiments. Members of the happy group, however, learned to discriminate between facial expressions faster than the angry-group dogs.

Other researchers have performed similar studies, but Muller said those designs weren't clear enough to prove that the dogs really prevailed because they could acknowledge the moods underlying human facial expressions. Muller and his team carefully designed this study so the results were more conclusive: The dogs couldn't succeed if they were just responding to an unrelated cue, a la Pavlov's famous conditioning experiments.

The findings support what many dog owners may already believe from instinct, giving credence to that conviction and opening the door to a deeper exploration of the dog-human bond. Still, Muller says it's not clear whether dogs can read human expressions solely because they spend so much time around people, or if thousands of years of domestication plays a role, too. According to Muller, it would make sense to perform similar tests with wolves, a closely related but undomesticated species.

Visual recognition ability probably varies more between individual dogs than entire breeds, but Muller said they'd like to study the significance of breed, as well. Dogs bred for companionship or to work closely alongside humans may, theoretically, have some advantage discriminating between facial expressions.

Still, it's nice that even these preliminary findings make one thing clear: Fido is so happy that you're happy.