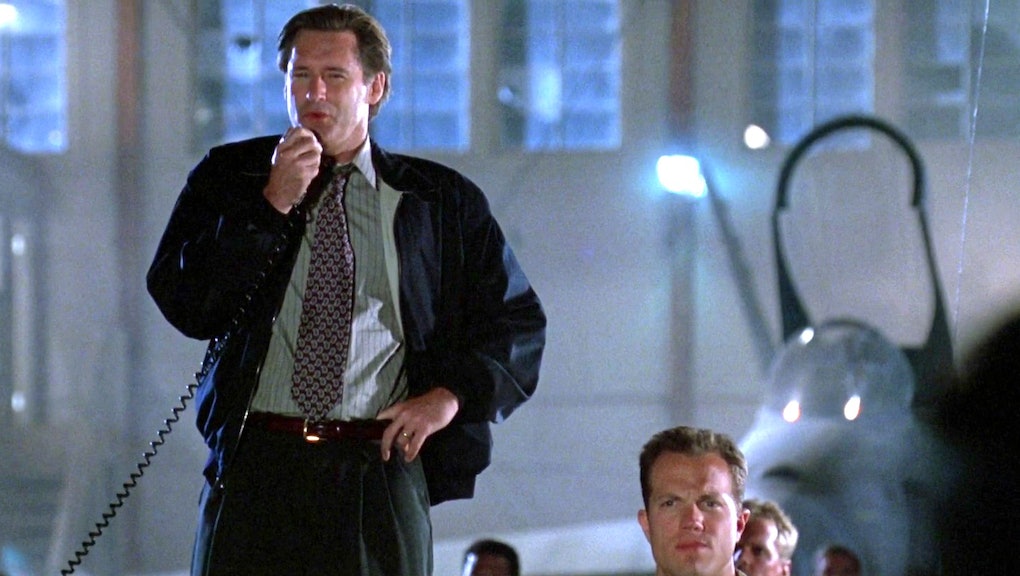 Every President's Day, writers, historians and iconoclasts around the United States put forth their opinions on which U.S. president deserves the title of "best." The results are usually a reshuffled list of the same three or four dead white guys whose faces grace American currency: Washington, Lincoln, maybe one of the Roosevelts.

But the real zeal is saved for a different kind of presidential debate: Who is America's worst president? Is it Andrew Johnson, who opposed the 14th Amendment and was nearly impeached? Is it James Buchanan, whose inability to muster a damn to give about secession helped ignite the Civil War? Is it George W. Bush, who was... George W. Bush?

The question of ranking America's worst presidents is left to better historians than us, but there is one area of presidential scholarship we feel confident in dissecting: The title of America's worst fictional president. Although there are many contenders from both film and television — House of Cards' inept Garrett Walker, the murderous Allen Richmond in Absolute Power, whoever the president was in Escape From New York — there can only be one president weak enough, one president incompetent enough, one president bad enough to top a list of buffoons, eugenicists and shapeshifting terrorists.

Although Whitmore is portrayed by two-time fictional POTUS Bill Pullman as a heroic leader who successfully repels an alien invasion armed with nothing more than an F-18 and Will Smith, his leadership, judgment and instincts are revealed time and again as flawed, unsound and dangerous.

Even before the alien invasion, Whitmore's administration is shown to be in trouble. In his first scene, Whitmore is shown waking up at 10 a.m. — President Bill Clinton got by on four hours a night, but Whitmore apparently needs his beauty rest — to his press secretary, the love-starved Constance Spano, chastising him for his plummeting approval ratings, which she cautions are the result of his refusal to stick to his guns. "Now, the message has gotten lost," she says. "There's too much politics, too much compromise."

A convenient nearby television tuned in to The McLaughlin Group informs us that Whitmore's approval ratings have fallen below 40%, and that "even his crime bill failed to pass," indicating an ineffective executive whose charisma stops at his chin. "Are the salad days over for President Whitmore?" wonders host John McLaughlin. "Leadership as a pilot in the Gulf War is completely different from leadership in politics," says Morton Kondracke. Even Eleanor Clift, liberal gadfly that she is, calls Whitmore a "wimp." On The McLaughlin Group! Being called a wimp on The McLaughlin Group is the most embarrassing thing to happen to an American president not involving pretzels or a blue dress. Even in the late-nineties era of Pax Americana, Whitmore is an aimless president with few accomplishments to his name.

Then comes an actual crisis. If we thought Whitmore was useless when it came to passing crime bills, just wait until Staten Island-sized spaceships descend on the world's greatest cities (and also Los Angeles). A "checkmate" moment against humanity draws nigh, but instead of evacuating the cities, coordinating a response with other global leaders or gathering intelligence on what the aliens might want, Whitmore bickers with his secretary of defense (a former CIA chief who joins Oliver Platt's character in 2012 in the role of "the only person making goddamned rational sense in the movie but who is also somehow the bad guy") about DEFCON status and lets his young daughter wander around the White House unsupervised.

Instead of making any hard decisions, Whitmore leaves the saving of his own life up to menschy cable repairman David, who helps finally convince the president to evacuate the invaded cities — not that it makes much of a difference. In a daring, implausible escape, Whitmore flees Washington, D.C. on Air Force One as the capital is engulfed in flames. The rest of the people in New York, Los Angeles and D.C. be damned.

With the majority of the world's major cities completely destroyed within 36 hours, Whitmore does the only thing he can think of: He drops a nuclear weapon on Houston, presumably after determining that the sooner our planet is reduced to radioactive rubble, the sooner the aliens will leave. It strains credulity to posit that the American public would forgive Whitmore for launching a nuclear attack on one of his own cities. If the infamous "It became necessary to destroy the town to save it" mentality of Vietnam didn't win the war any supporters, Whitmore's variant — "I nuked Texas to save it" — wouldn't either.

Then comes the speech. It's a moment that comes to define the Whitmore presidency: The improbable WASP who can fly an F-18 delivers what is, admittedly, a pretty kickass speech before boarding a fighter jet to take on an approaching saucer. This speech has become the battle cry of every Whitmore apologist who doesn't mind its jingoistic overtones and naked endorsement of American exceptionalism:

"And should we win the day, the 4th of July will no longer be known as an American holiday, but as the day when the world declared in one voice: 'We will not go quietly into the night! We will not vanish without a fight! We're going to live on! We're going to survive!' Today, we celebrate our Independence Day!"

Never mind that the maladroit handling of the initial appearance of the flying saucers by Whitmore's administration lead to the deaths of millions of Americans, and please ignore the detonation of a nuclear weapon over a major American city. A speech beginning with the lines "We had your best interests in mind when we didn't evacuate New York, nuked Houston and hid in a bunker waiting for you all to die" doesn't have quite the same rousing effect .

Despite other global powers also joining in what Whitmore calls "the largest aerial battle in the history of mankind," box office returns require Whitmore to be the triumphant leader of the ingenious nation that eventually destroys the aliens. Clearly, no other country on the entire planet could have thought of a plan as complex as "hurling a drunk crop duster at the shaceship's exposed energy port" or "hope their antivirus software hasn't been updated."

But the lesson of Independence Day is that American leadership — Whitmore's leadership — was a catastrophic failure. Both in the hours before the initial attack and in the following days, Whitmore's instincts were wrong, dangerous and reckless. Even this military victory against the invading aliens wasn't Whitmore's: The true hero of the offensive was an alcoholic sharecropper whose healthy fear of aliens indicate that he probably would have responded more responsibly to the extraterrestrial threat than President "Let's See If They're Friendly" Whitmore.