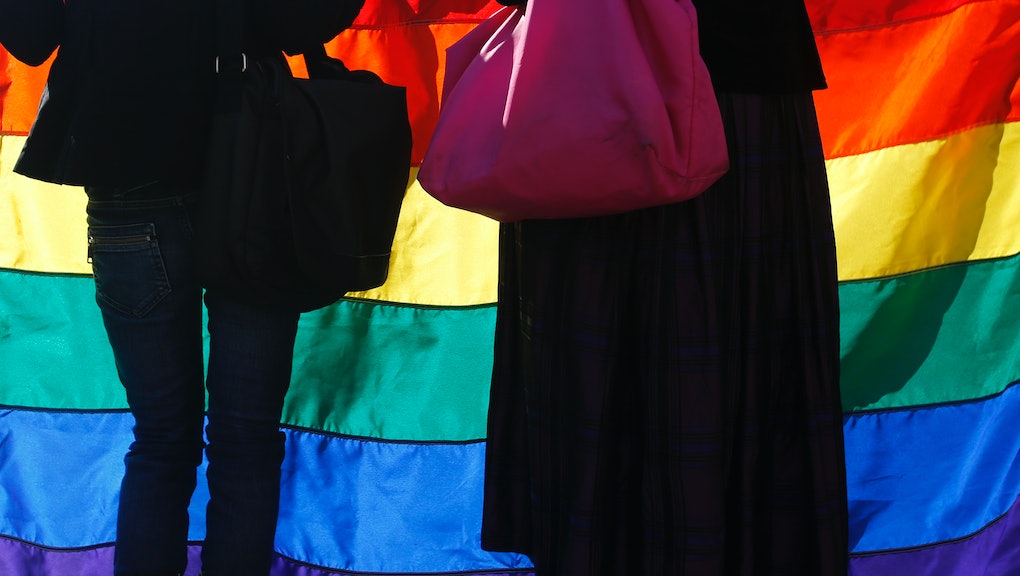 Conversion therapy, also known as reparative therapy, is a dangerous pseudo-science intended to "change" LGBT people's sexual or gender identity. Despite the overwhelming evidence against the effectiveness and safety of the outdated practice — every peer-reviewed scientific organization has condemned it as ineffective and harmful to LGBT individuals — it's still legal in the majority of the country for anti-LGBT groups to promote it as a viable option to "cure" homosexuality.

A recent decision by a New Jersey Superior Court judge just might change that. Judge Peter F. Bariso Jr. ruled on Feb. 10 that conversion therapy is "consumer fraud," potentially setting the precedent for a long-overdue national ban on the deeply hurtful practice. It's about time: Conversion therapy is ultimately an act of violence against LGBT people.

"To those who still promote reparative therapy or hope it could work for them or a family member, I hope they realize this path leads to a horrid dead end. It's harmful and excruciatingly painful."

The case: Five former patients of Jews Offering New Alternatives for Healing (JONAH), a nonprofit "dedicated to educating the world-wide Jewish community about the social, cultural and emotional factors which lead to same-sex sexual attractions (SSAs)," recently sued the organization under New Jersey's Consumer Fraud Act. The defendants claimed that JONAH misled them into paying for costly "therapy" to change their sexuality.

"The ruling marks the first time a court in the United States has found that homosexuality is not a disease or a disorder and that it is fraudulent for conversion therapists to make such a claim," writes the Southern Poverty Law Center (SPLC) on its website.

A major blow: According to the SPLC, this is a "a devastating ruling for the conversion therapy industry." Deputy legal director David Dinielli said, according the center's website:

"For the first time, a court has ruled that it is fraudulent as a matter of law for conversion therapists to tell clients that they have a mental disorder that can be cured. This is the principal lie the conversion therapy industry uses throughout the country to peddle its quackery to vulnerable clients. Gay people don't need to be cured, and we are thrilled that the court has recognized this."

An act of violence: JONAH's mission is identical to that of many other groups across the country that promote conversion therapy. These groups are religious in nature and oppose non-hetero sexualities due to beliefs that same-sex intimacy is inherently sinful. JONAH, like similar groups, goes so far to claim that homosexuality is a mental disorder. Such a narrative is not only false but also dehumanizes the LGBT community.

What's more, according to a damning report by the American Psychological Association, participants of conversion therapy note higher rates of mental health issues, ranging from PTSD, to anxiety, to depression and suicide. That means this practice is actively harmful to an already vulnerable community.

It's time to follow New Jersey's lead: Despite the closing of Exodus International in 2013, anti-LGBT religious groups are still too often keen on "changing" LGBT people from queer to straight, and conversion therapy continues to be marketed as a viable "solution" for LGBT people by anti-LGBT groups around the country.

California, New Jersey and Washington D.C. are the only states to have banned conversion therapy. It's time the rest of the country recognized that groups like PFOX implicitly promote harm towards LGBT individuals and banned the practice, too.

Fighting back: Thankfully, more and more people are standing up to conversion therapy. The past few years have witnessed multiple instances of former ex-gay poster children coming forward and speaking out against the therapy that supposedly changed them.

In June 2014, the National Center for Lesbian Rights (NCLR) launched the Born Perfect Campaign, an initiative to ban conversion therapy. The NCLR wrote on its website, "We are committed to ending these dangerous and stigmatizing practices across the country once and for all — relegating them to the dustbin of history, and ensuring every child knows they were #BornPerfect."

Hopefully initiatives like Born Perfect will continue to flourish. To allow conversion therapy to present its pseudo-science as truth, when the facts reveal how much it hurts LGBT individuals, would be ethically reprehensible. It's time we ended the practice for good.