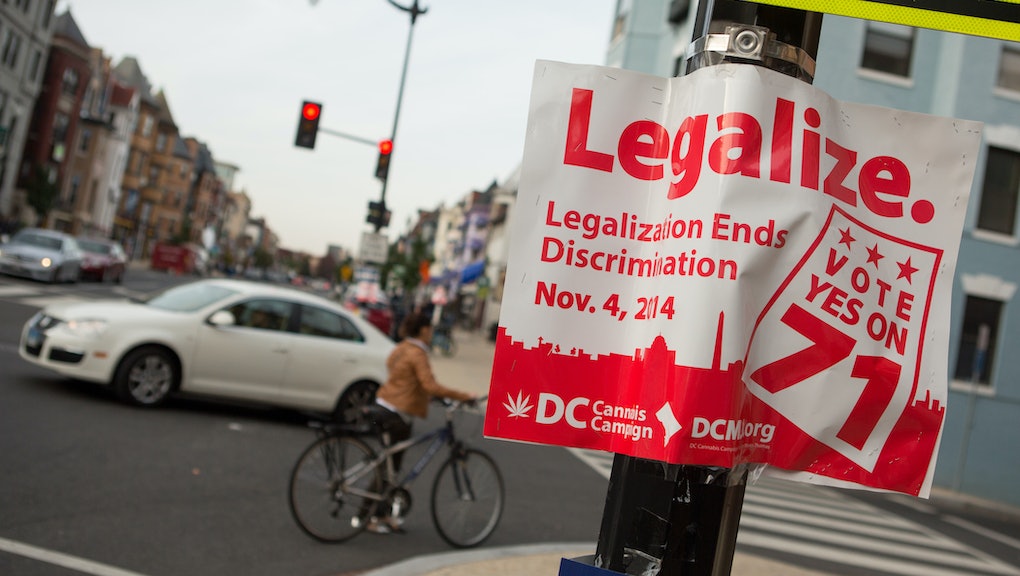 Congress Has Turned D.C. Marijuana Legalization Into a Nightmare

On Feb. 26, an overwhelmingly popular citizen's initiative to legalize marijuana will become official Washington, D.C. law. Initiative 71, which passed in November, legalizes the limited cultivation and possession of marijuana by adults 21 or older, expanding upon existing ordinances decriminalizing the possession of small quantities of marijuana.

This is serious: By interfering with D.C.'s initiative, Congress has actually undermined District sovereignty in a way that could seriously impact public safety. The highly regulated dispensaries set up to sell recreational weed in Colorado and Washington won't exist, and D.C. residents will be left with no clear rules on just how far their newfound freedoms extended.

The Washington Post reports that when marijuana becomes legal in the nation's capital, it will do so in a completely unregulated marketplace with little oversight or safety rules:

"Where can it be bought? Sold? Eaten? Smoked? We're not going to have answers to any of that, and that makes me very concerned," said D.C. Council member David Grosso (I-At Large). And as the consequences play out in the nation's capital, he said, it could set back the entire movement: "Let's be responsible about how we do this so we don't have a negative image coming out."

Since the council has not been able to properly form rules telling police just how to enforce the new regulations, which prohibit them from arresting citizens or issuing fines for possession or using it as an excuse to advance criminal investigations, D.C. officials told the Washington Post that the result will be costly and avoidable litigation. D.C.'s police, which have historically arrested black residents for marijuana-related offenses at wildly disproportionate rates, will be set loose in this environment with unclear instructions on what to enforce and how.

The result won't be pretty. Regulations like where and how marijuana can be grown, sold or possessed have yet to be established, leaving D.C. residents in the uncomfortable position of not knowing how to follow the law. For example, petition organizer Adam Eidinger told the Washington Post that it's unclear whether residents can grow marijuana on their balconies or whether they'll face hefty punishments like prison time for doing so. In the absence of any agreement, federal officers on federally administered property from the National Mall to D.C. traffic circles and public housing will still arrest and prosecute D.C. citizens for simple possession.

While they're waiting, residents looking to enjoy the liberalized rules on pot will likely turn to membership-based cannabis grow clubs or businesses that exploit other workarounds, such as giving the weed away as free gifts that come with the purchase of other products or services.

Of course, it's better than the status quo: D.C.'s legalization initiative is commendable regardless of whether it's being hamstrung by unnecessary congressional meddling, and fears of rising drug-related crime or new threats to public health simply haven't materialized in the states implementing legal recreational weed laws.

But part of the point of legalization is to set up the kind of regulatory environment that promotes public safety, cuts off black market marijuana sales and allows for health officials and regulators to ensure everyone is following the rules. By cutting off the funds necessary to decide upon a regulatory regime fit for the city's residents, Republicans in Congress have only had the perverse effect of making D.C. less safe.

It's pretty telling that all those "limited government" principles go out the window as soon as some right-winger in Congress smells a joint. What do you expect? The so-called war on drugs has never really been about protecting citizens anyway.