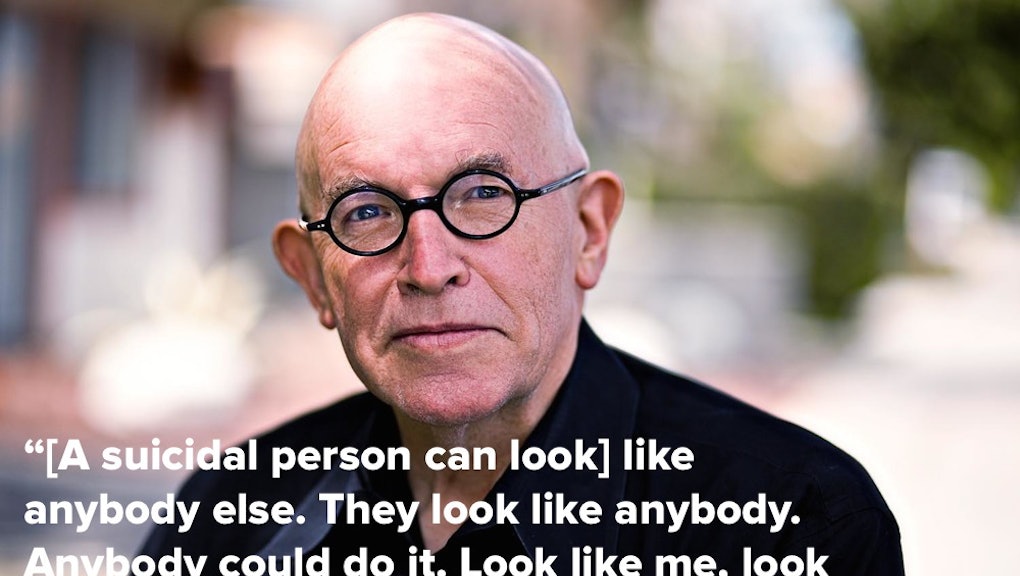 These three names represent perhaps the most high-profile cases of people who ended their own lives over the past year, each under specific, differing circumstances. Unfortunately, conversations about their stories have often sounded the same, and have relied on outdated ideas of suicide as the refuge of the weak, selfish or needy.

Such tropes are callous and inaccurate generalizations about the thousands of Americans facing suicidal thoughts; the Centers for Disease Control and Prevention reports that suicide was a leading cause of death in 2013, impacting 41,000 people, and that an estimated 1 million U.S. adults make a suicide attempt each year.

One photographer is adding much-needed depth to the discussion around suicide by expanding society's impression of those who attempt it. Dese'Rae Stage's Live Through This project provides a forum for those who have survived suicide attempts to share their experiences on their own terms.

Stage, herself an attempt survivor, started the project roughly four years ago. Now, the online collection features not only the faces of each survivor, who bravely choose not to remain anonymous, but also raw personal testimonies about what life is like in the aftermath of nearly ending it all.

Each photo below includes an excerpt from the survivor's full account, as shared in interviews with Stage.

"The main function of Live Through This is to show that our stereotypes about the kinds of people who have suicidal thoughts (and subsequently act on them) are bunk. It is clear visual proof that not one of us is immune," Stage told Mic. "That idea is further supported when you dig deeper and look at the stories themselves. These are people of many, many different kinds of backgrounds."

Since she started the project, Stage said she's met upward of 100 people who shared their personal accounts, and has traveled widely across the U.S. to conduct interviews. The survivors represent various intersections of identity, underscoring the message that suicide is a societal problem that affects people from all walks of life, including but not limited to those who are marginalized or have been diagnosed with a mental health condition.

The collection of narratives and interviews reveals a variety of approaches to life in the aftermath of a suicide attempt. Some of the survivors have a diagnosed mental health condition, others don't. Some attend therapy sessions, others don't. Some take medication as a form of treatment to help stave off suicidal ideations, others don't. A number of them even open up about a continued struggle with thoughts of suicide.

All of this is part of the larger point: Each individual is on their own journey and has their own ways of coping.

Stage said that for many who struggle with suicidal ideations or have made a past attempt, the act of talking about their feelings isn't an act of selfishness or emotional manipulation. On the contrary, it's often an act of courage to reveal that something's not OK.

"Those who talk about suicidal thoughts or feelings are performing an act of strength — allowing oneself to be so vulnerable in the face of cultural discrimination of mental health issues is incredibly brave, and it shouldn't be met with consequences," Stage said. "Further, all talk of suicidal thoughts should be taken seriously."

Stage says she plans on continuing Live Through This, which runs primarily on donations, and hopes to widen its reach by collecting more survivors' stories and speaking about the project at colleges. Although building community around the issue wasn't one of Stage's initial goals, she said Live Through This helped her realize she'd been looking for one.

"I want people to know that the 'not in my backyard' mentality is nothing more than denial. We are all susceptible, and while it's scary as hell to think about, suicide is a reality in this country," Stage said.

"I want them to be a little less judgmental, a little more committed to compassion and empathy. I want them to try to see past the idea we all carry around about what "crazy" is, because we're all people, and we all deserve love and understanding.

All photos are courtesy of Dese'Rae Stage/Live Through This and have been modified with permission.

If you or someone you know is at risk for suicide, you are not alone. Seek help by calling the National Suicide Prevention Lifeline at 1-800-273-TALK (8255).