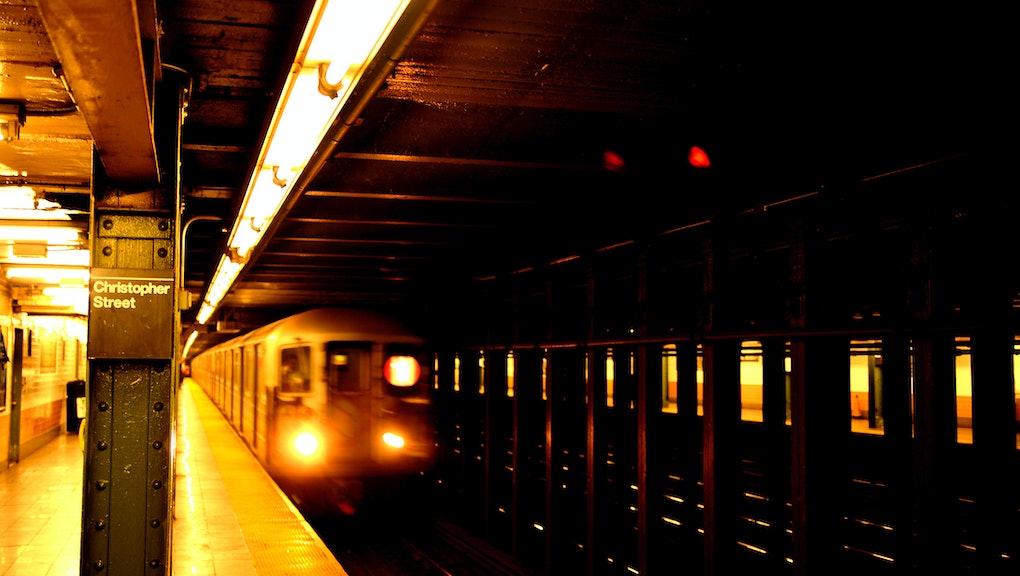 Every subway car has one: the wary rider who leans on the door or assumes a wide stance to avoid direct contact with any subway surfaces. In one sense, who can blame them? Upon first (or 5,000th) glance, the New York City subway might seem like the perfect place to contract an infection — especially in the winter, when single-digit temperatures drive sniffling pedestrians underground and a healthy coating of sludge covers train floors.

Thanks to researchers at Weill Cornell Medical College, who swabbed subway surfaces and published their findings, we know that visible grime is only the half of it: Microscopic pathogens, like anthrax and bubonic plague, live on turnstiles and subway benches across the five boroughs.

Still, even in its least savory state, the subway isn't much of a health hazard. Aaron Glatt, a New York-based infectious disease specialist affiliated with the Infectious Disease Society of America (IDSA), says that strap-hangers who've had their shots have no reason to fear skin-on-subway contact. When it comes to catching infections, Glatt says the subway is no more dangerous than any other public space. (In 2001, Glatt himself swabbed the subway for a New York Times story.)

In fact, many places are far filthier. Here are nine seemingly benign situations or environments with a relatively high infection potential.

Gym mats that don't get wiped down in between users harvest all sorts of germs.

So does other people's makeup. Communal mascara is pink-eye city.

Late-night pizza. Avoid the grandma slice that's been hanging out in the glass case of your corner pizzeria. Staph bacteria, which can survive reheating, loves spoiled food. Glatt says that dairy and meat require refrigeration after two to four hours, max.

Cutting boards. E. coli and salmonella from raw meat and vegetables can linger on porous, non-quick-drying surfaces like wood cutting boards, as the Daily Beast explained. Plastic is easier to disinfect.

Restaurant ice. An investigation by the Daily Mail found higher levels of bacteria in ice at U.K. fast food chains than in toilet water.

Long fingernails. Hospitals and restaurants require employees to keep their nails short for good reason, according to Glatt. Long nails, ABC reported, have been linked to a few deadly infectious disease outbreaks.

Pedicures. Tough skin always beats a fungal infection. Don't let anyone take a razor to your calluses, an illegal service that nail salons may still offer. Some experts suggest taking even greater precautions, such as bringing tools from home and not shaving legs in the days leading up to a pedicure, as bacteria particles can easily seep into shaving nicks.

Airplanes. Colds pass easily between passengers sitting in uncirculated plane air (e.g., when the pilot turns off the engine while waiting for takeoff), as the Wall Street Journal reported.

Desk lunch. Think about how many salad-and-soup combos you've eaten hunched over your desk and how few times you've wiped it down. As the Huffington Post reported, "Your desk may harbor 400 times more bacteria than — wait for it — the average toilet seat. See, 64% of us clean these desktops once a month or less."

All fear-mongering aside, people who don't have compromised immune systems (due to an existing infection or a chronic illness) should trust their bodies to fend off pathogens, according to Glatt, provided they take a few measures.

First, hand hygiene is key: Don't put unwashed hands in your eyes or mouth (or anywhere on your face), and wash your hands after touching public surfaces. Soaping up is effective; hospitals have seen infection rates plummet after implementing hand-washing initiatives. Viruses — the common cold, flu, Ebola, HIV — are not airborne. Unless someone sneezes into your face, keeping your fingers out of bodily orifices drastically reduces the chance of transmission.

Second: Get vaccinated, so you don't catch or carry viruses that actually could kill you. Refuse vaccines and you become a menace to yourself and everyone else riding the rails at rush hour. Otherwise, swipe your MetroCard without fear.