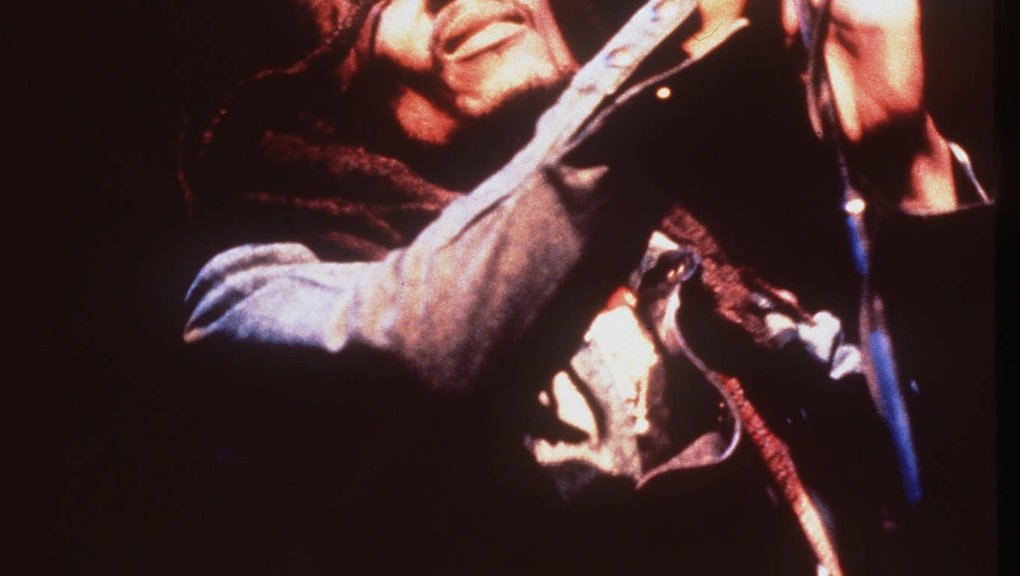 Bob Marley would have turned 70 this year. Though his biggest hits came out decades ago, his presence still looms large in culture — perhaps in a way that he would not have agreed with. His legacy is big. It's also big business.

"Today, Bob is a paradox," Gregory Stephens wrote for Jah Works. "It is primarily as a spokesperson for underprivileged people that he has become a global icon, but his music and image have become thoroughly commodified in every imaginable way." Marley's eternally 36-year-old face, flanked by lions and weed leafs, covers backpacks, tapestries and T-shirts. Marley's now the spokesman for his own line of recreational marijuana and herbal beverages.

But before Marley was known popularly as the patron saint of drug-fueled escapism and vacuous "peace and love" messages, he was one of our finest and most radical political revolutionaries. He was a harsh critic of capitalist and imperialist systems. The vast majority of his canon is aimed at tearing down these false idols in order to replace them with a new system of consciousness.

Here are the 14 lyrics that will keep Marley's legacy pure and uncompromisingly radical, like it needs to be.

"Until the philosophy which holds one race superior and another inferior is finally and permanently discredited and abandoned, everywhere is war, me say war."

Almost all the lyrics in "War" including those quoted above are derived from a speech Ethiopian Emperor Haile Selassie I delivered to the United Nations in 1963. "Until all Africans stand and speak as free beings, equal in the eyes of all men, as they are in the eyes of heaven," he said. "Until that day, the African continent will not know peace." These lines appear in the last verse of "War." They show how attuned Marley was the sociopolitical movements of his day. All his music was intended to amplify those messages and struggles. It was meant to show the problems for what they really were and to offer a solution.

"Them belly full, but we hungry. A hungry mob is an angry mob."

This is a classic example of Marley's eye for socioeconomic inequality. Often, his go-to solution was just to tear down the entire system and rebuild. He encouraged this riotous attitude on "Burnin' and Lootin,'" "Revolution" and "Guiltiness" especially — but you won't see those on Legend.

3. On the corruption of power

"Yeah, we've been trodding on the wine press much too long. Rebel, rebel! ... Me say them graduatin' thieves and murderers. Look out now: They suckin' the blood of the sufferers."

"Babylon System" tears down the elite class for exploiting the powerless among us. Marley criticizes the church for deceiving the people. He rails against universities for arming an elite class with knowledge inaccessible to the poor. Though the chords and rhythms are cheerful, he paints a horrific world that makes a revolution seem urgent.

4. On life in the ghetto

"Life must be somewhere to be found instead of concrete jungle, where the living is hardest."

Only a handful of Marley's early songs were set in the beautiful vistas of Zion that came to define his legacy. "Concrete Jungle" deals with the harsh realities of ghetto life. "No chains around my feet / But I'm not free / I know I am bounded in captivity," he sings.

"I remember on the slave ship, how they brutalize the very souls. Today they say that we are free, only to be chained in poverty."

Marley sang here of the devastation wrought by the world's ghettos. Though slavery is dead, racism lives in our cities' structures. Black people will not be truly free until they can acquire socioeconomic equality, which unfortunately is still many years away.

"Woman hold her head and cry, cause her son had been shot down in the street and died from a stray bullet."

Marley takes an even deeper dive into inner city violence and death on "Johnny Was." He describes a passerby's attempts to comfort a woman who has just lost her son. He tries to tell her there is life after death for good people like Johnny. But the woman can't see it through through her tears and the injustice that he died "just because of the system."

7. On tearing the system down

"Well, it seems like total destruction [is] the only solution, and there ain't no use: No one can stop them now."

In the face of endless war, even Marley's boundless hope could wane. There are few ways to misinterpret lines like "total destruction is the only solution." Though his music is hopeful on the whole, its honest portrayal of the darkest despair only adds to its power.

With his lyrical mastery, Marley could make the Bible seem as subversive as the Communist Manifesto. The revolutionary language in Marley's "Small Axe" is shrouded in biblical allusions. The axe metaphor comes from Matthew 3:10. And the song's second verse ("Whosoever diggeth the pit / Shall fall in it, fall in it") is straight out of Proverbs.

On "Survival," Marley describes a society obsessed with progress. He claims the blind pursuit of technological advancement has only further separated the have and the have not countries. "How can you be sitting there saying that you care?" Marley asks in the opening lines, "When every time I look around, the people suffer in the suffering in every way, in everywhere." There are no easy answers.

10. On technology and injustice

"You see men sailing on their ego trip, blast off on their spaceship, [a] million miles from reality: No care for you, no care for me."

– "So Much Trouble In the World"

"So Much Trouble In the World" comes off the same album as "Survival" and deals with similar themes. Again he condemns the blind pursuit of technological advancement that comes at the expense of the poor and the working class. All that money, time and energy that goes into shooting rockets to the moon could be used to alleviate such a vast amount suffering in the world. But that's not the way the capitalist system works.

"In every [man's] chest there beats a heart. So soon we'll find out who is the real revolutionaries, and I don't want my people to be tricked by mercenaries."

"Zimbabwe" appears on Marley's 1979 album Survival, which is filled with pro-African revolution hymns. With the song he declared his support for an independent Rhodesia. The song led to Marley being invited to play at the Zimbabwe's 1980 independence day celebration. His performance was apparently interrupted by a riot that broke out between protesters and police. But the performance resumed when order was restored, and he closed the set with "Zimbabwe," sung to a unified and determined audience. It remains one of the high points in Marley's campaign to inspire a movement for an Africa free from corruption and imperial powers.

"Never make a politician grant you a favor. They will always want to control you forever."

Another excellent Marley political diss track: He once again undermines the notion that politicians are necessarily the agents for change we need them to be. He sings that they "kill, cramp and paralyze all weak at conception, wipe them out of creation." The only way to fix a system that broken is to destroy it.

13. On education and real knowledge

"So they bribing with their guns, spare parts and money, trying to belittle our integrity now. They say what we know is just what they teach us."

In 1976, during a tense election cycle in Jamaica, Marley was shot by an a group of unarmed gunmen. To this day, it's not exactly clear who attacked the star or why, but it's highly likely it was politically motivated. Marley had been scheduled to perform at a Concert for Peace to try to ease the tensions between the opposing political factions. Thankfully, the attack did not wound him badly, and he still played the show. But he was disgusted by Jamaican politics afterward and exiled himself to England where he recorded his masterpiece, Exodus. This song deals directly with that attack and again expresses his disgust with those twisted politics and the need for people to free their minds.

"Emancipate yourself from mental slavery, none but ourselves can free our minds."

"Redemption Song" is one of the most beautiful that Marley ever wrote. It was also one of his last. It strikes a masterful balance between hopeful and the radical, just enough to make it accessible for people of all political persuasions. But its core message is still very Marley: Once people free their minds, they will be able to see exactly how the world must change in order to make it a more accepting and beautiful place for all.