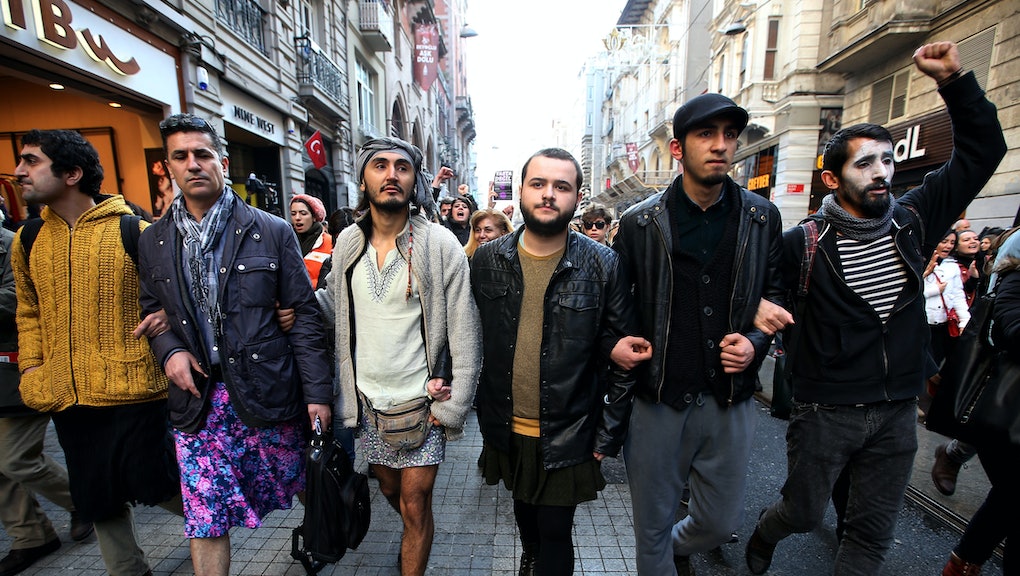 After a Women Died Fighting Off Her Rapist, Men Are Making a Powerful Fashion Statement

On Feb. 11, Özgecan Aslan, a 20-year-old Turkish university student, was murdered after resisting a rape attempt from a minibus driver in the city of Mersin in southern Turkey. After defending herself with pepper spray, the would-be rapist stabbed and beat Aslan to death and later burned her body with two accomplices.

Though Turkish Prime Minister Ahmet Davutoglu promised to "hunt those responsible for the crime and punish them," reports the BBC, many in the country feel that the government's response to this heinous crime hasn't been enough.

To make their own voices heard, thousands of women in Turkey have been filling the streets over the past week to rally in support or Aslan and express their anger at the murder of a women who resisted a rape.

In other more fashion-focused show of support, Turkish men have been posting photos of themselves to social media wearing miniskirts as a sign of support for women's rights.

Using the hashtag #ozgecanicinminietekgiy, which translates to "wear a miniskirt for Ozgecan," the BBC reports that the trend started in neighboring Azerbaijan and, as of Wednesday, 1,500 people had participated in the campaign.

Along with this hashtag and campaign, others in Turkey have also joined the thousands of women mobilizing in the streets by tweeting #EteginiGiyTaksimeGel, which translates to "Come to Taksim [Square] wearing a skirt." They've filled the streets wearing miniskirts, demonstrating their solidarity with the women's rights movement that's gained momentum following Aslan's murder.

The hashtag movements are just part of the country's expression of anger toward the poor and violent treatment of women.

Along with posting selfies wearing all black and tweeting their own stories using the hashtag #sendeanlat, or #tellyourstory, the people of Turkey are sending a clear message: Violence against women must be stopped. Now, hopefully, everyone will start to listen.