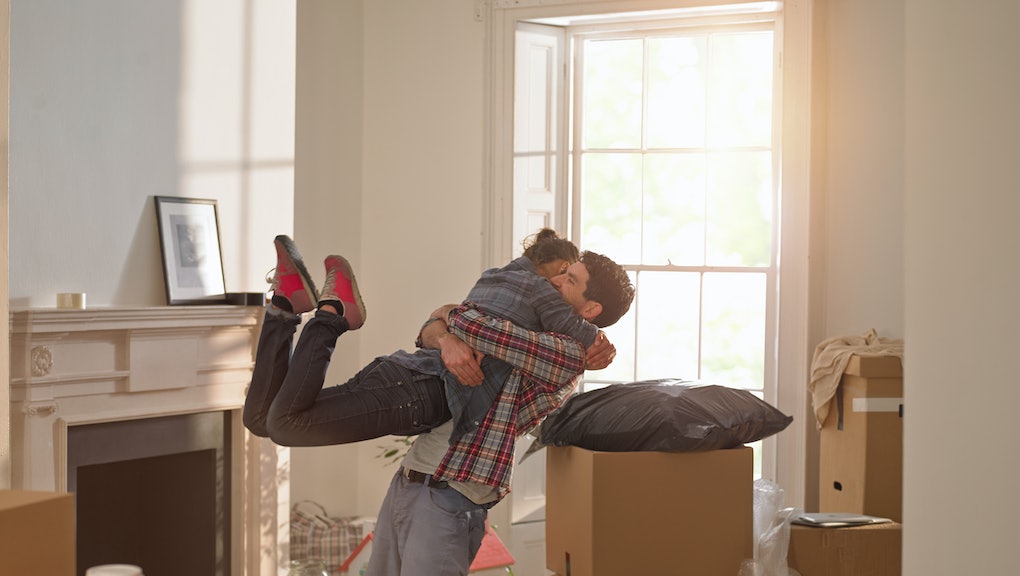 More and more of us are living with significant others, so much that it's become an expected relationship step. And while some cohabiting couples are in pre-engagement mode and headed toward marriage, other duos are just living together, without marriage necessarily being the goal.

The massive rise in cohabitation has brought on the inevitable conversation: Is living together good or bad for a couple?

It turns out the answer might be simpler than we've thought. According to recent studies, brought to our attention by the Science of Us, the most important thing you need to ask yourself before you move in with your partner is "Why am I doing this?" And the research shows that couples happiest couples who answered "to spend more time together" are the happiest.

Like we said: It's crazy simple. But it makes sense that wanting to live together for the sake of living together — not simply for the sake of convenience or logistics — points to a happy future.

Making a conscious choice for happiness: A 2014 study of cohabiting couples highlighted this point by comparing the reasons couples move in together. After studying 280 couples, researchers found that those who were "testing the relationship" were more ambivalent about their partnership in general, while couples who moved in because of "convenience" showed signs of lower commitment. On the other hand, those who share real estate for the purpose of "spending time together" scored highly on commitment and satisfaction, and low on ambivalence and conflict.

That doesn't mean that saving on rent or cutting down on wasted travel time aren't valid incentives for making the cohabiting leap. But those shouldn't be the main reasons a couple ends up living together; the biggest motivator should be a reflection of the relationship itself. In other words, cohabiting is the right decision when a couple really believes spending more time together will make them happier and improve their relationship.

Kara*, 26, told Mic, "I moved in with my boyfriend of two years before I was ready because of high rent prices. The whole arrangement only lasted six months: We had conflicting schedules, never slept at the same time and spent too much time together in close proximity. We had to break up."

On the flip side, as one guy told Cosmopolitan.com of his positive decision to move in with his girlfriend, "There was the element of practicality, but I think that lined up nicely with the fact that it's what we wanted to do."

Along the same lines, it's better for cohabiting to be an active decision, not a passive one. Experts have pointed out that moving in together by default — "sliding into" cohabiting versus making it a conscious, discussed decision — are less satisfied than the couples who actively decided that living together is a step that will contribute to their joint happiness.

Marriage not required: Moving in together before marriage doesn't raise your risk for divorce, as previously assumed. Plenty of people do end up marrying after living together: In 2006-10, 40% of women cohabiting with someone as a first union did end up marrying that partner within three years. But that number goes down each year as the general rate of marriage declines and the rate of cohabiting goes up; moreover, an increasing number of people cohabit more than once. In short, marriage doesn't need to be part of the equation for cohabiting to work.

Cohabitation without eventual marriage might be taken as a sign that cohabiting can hurt a relationship. But even if couples choose to share housing for all the "right reasons" and are eyeing marriage, the relationship might still end. And that's not necessarily a failed outcome: Cohabiting can be one of the best ways for a couple to realize they're not equipped for the long haul, since living together inevitably tests the relationship in important ways.

That's exactly what Kara found in her brief period of unwed cohabitation. "Moving in and failing might have been the best thing that happened to us. I realized the relationship had underlying incompatibility that just wasn't obvious with separate apartments," she said.

Long-term relationship success is all about resolving conflict, Broder said. To that end, "[Cohabiting] can "give you a bird's-eye view of the issues you're going to have once you do get married."

The way to know that moving in together is the right decision isn't about cheaper rent or even good timing; it comes down to believing that even with all the potential issues, living with your S.O. will make you happier than living without them. Moving in means facing challenges and giving some things up, so you've got to feel strongly enough that what you're getting in return is pretty damn awesome.

*Name has been changed.