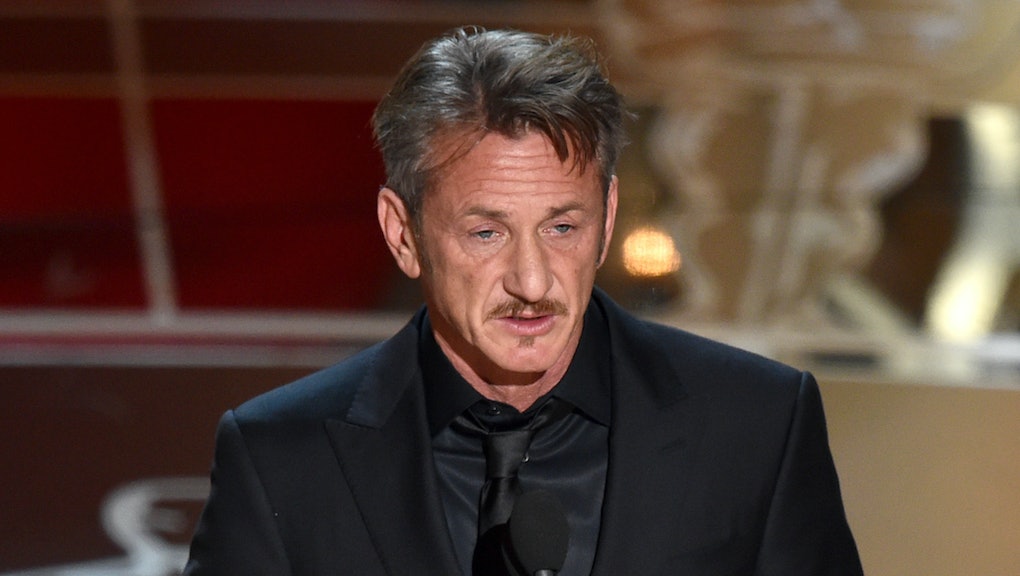 One of the biggest upsets at the 87th Academy Awards had little to do with the actual nominees. It had everything to do with an offbeat joke from Sean Penn that brought the night's climax, the Oscar for Best Picture, to a screeching halt.

Announcing that Mexican director Alejandro Gonzalez Iñárritu's Birdman would take home the prize, Penn quipped, "Who gave this son of a bitch his green card?"

Within the context of an awards ceremony where the overwhelming majority of voters are old white men and there was the least diversity in nominees since 1995, Penn's joke all but confirmed why the Academy's current racial makeup remains an institutional issue in filmmaking.

It's important to remember that Penn's remarks don't exist in a vacuum. Every day, people from Latin American countries in the U.S. deal with the stigma of being "illegal" and have their citizenship status questioned. They encounter racist and xenophobic insults demanding that they "go back" to where they came from. Nevertheless, many viewers rushed to fervently defend Penn's ignorant quip rather than try to understand why it struck a sour note for scores of people, especially people of color, in the first place.

1. "White people can also be immigrants, so the joke isn't a big deal."

While immigrants do come to the U.S. from European countries, it's not as common today as in the past. As CNN notes, Mexico was by far the largest country of origin of green card recipients in 2013, representing approximately 14% of immigrants to America, followed by China, India, the Philippines and the Dominican Republic.

Besides, context matters: Penn's joke wasn't targeted toward the likes of British actors Eddie Redmayne and Benedict Cumberbatch, among the many other foreign white people who were in the audience on Sunday night. It was targeted toward Iñárritu.

Penn and Iñárritu may indeed have a friendly relationship, but that's no excuse for turning such a monumental moment into a wisecrack about Mexicans and immigration. Joking between friends is one thing, but it's different when the interpersonal dynamics between two people are extended to an estimated audience of more than 40 million viewers — the vast majority of whom aren't clued in to the dynamics of this friendship and don't personally know either of these men. Outside of an elite "in-joke" bubble, comments like Penn's reinforce the racialized stereotypes that many Latin Americans just can't seem to escape.

"I found it hilarious. Sean and I have that kind of brutal [relationship] where only true friendship can survive. ... We have that kind of relation of old friendship. ... I thought it was very funny," Iñárritu told reporters in the Oscars press room, according to USA Today.

But even if Iñárritu wasn't bothered, he doesn't speak for several other people of color who were deeply offended by Penn's remarks. The joke has a different tenor in the world beyond the industry, where people from Latin American countries, especially Mexico, continue to be labelled "illegal" and are frequently questioned about their citizenship status.

4. "Penn has helped plenty of impoverished POC, so he gets a pass."

Having a history of humanitarian efforts doesn't make someone immune from reasoned criticism. Penn's quip derailed the focus from Iñárritu's shining moment to crassly remind the world how different the filmmaker is from the long line of white men who have historically won prizes for best director and best picture. Such difference warrants respect, not snark.

5. "It was all in good-natured humor. Lighten up."

This isn't about Penn's intent, but rather how such a racialized quip impacted many Oscar viewers. When Birdman was revealed as the Academy's pick for best picture, the focus should have been on a moment of achievement for the hard work of a dedicated cast and crew. Instead, Penn's joke underscored the unfortunate reality that there's still more work to be done before people of color in creative industries get the full respect, inclusion and equity that they deserve.