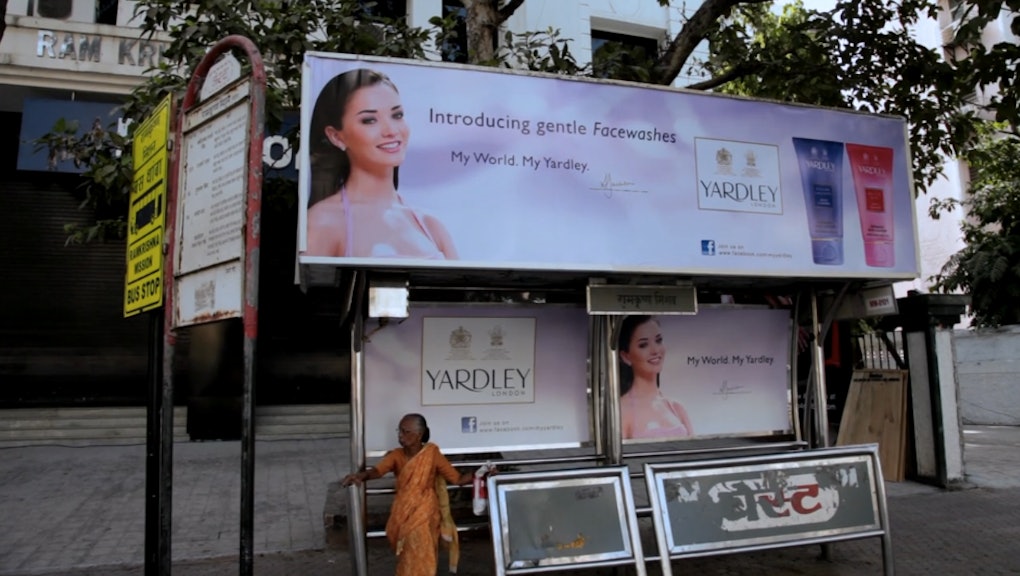 "We're losing bodies as fast as we're losing languages," says prominent British psychotherapist Susie Orbach in the upcoming documentary The Illusionists. "Just as English has become the lingua franca of the world, so the white, blondified, small-nosed, pert-breasted, long-legged body is coming to stand in for the great variety of human bodies that there are."

The documentary is the latest from 35-year-old Italian filmmaker Elena Rossini, who traveled to eight countries throughout North America, Europe, the Middle East and Asia over the course of seven years to explore the ways Western ideals of beauty — including, but not limited to, thinness — are commodified and scattered throughout the globe.

It may be National Eating Disorders Awareness Week, but we often forget that eating disorders — as well as the forces that may trigger them — are a problem well beyond confines of the U.S. In fact, rigid Western ideals are increasingly permeating cultures all over the globe, introducing damaging standards of thinness in particular where they may never before have existed.

Rossini was moved to make The Illusionists by what she saw as a cross-generation epidemic of body dissatisfaction, which has manifested in similarly distressing ways across diverse cultures.

Japan, for example, has historically maintained beauty standards distinct from Western ideals, according to the documentary, with curvy figures long-associated with positive values like wealth and fertility. Yet today, about 30% of Japanese women in their 20s are categorized as underweight — a proportion that has rapidly increased since the 1980s, as Dr. Tetsuya Ando of the National Institute of Mental Health states in the film.

The problem remains largely unrecognized: According to an article by writer Georgia Hanias in Marie Claire, only one professor specialized in eating disorders across all 80 Japanese medical schools in 2012.

"Japanese women are under incredible pressure to have an ideal body," states one woman interviewed on the streets of Tokyo in the film.

Jason Karlin, author of Idols & Celebrity in Japanese Media Culture, notes in the documentary that this increasing importance placed on thinness can be attributed in part to a Western media influence. Japanese women, he notes, try to "cultivate that body image that they see in women's magazines, which are women's bodies that are very thin, with very long legs and with many of the characteristics we associate with this kind of global culture of beauty that is circulating throughout the world."

Rossini echoes Karlin's conclusion: "What many sociologists have observed is that globalization — and the way American media has been exported to the rest of the world — has had a profound effect in the way people all over the world perceive beauty ideals," she told Mic.

Lebanon is another country explored in the film that appears to have been negatively affected by Western ideals. It's the country with the most plastic surgery procedures per capita, and about 1 in 3 Lebanese women has had a plastic surgery procedure, according to the film. One Lebanese student interviewed in the documentary sums up what this reality looks like: "If you walk around the streets of Lebanon, I think you'd realize that most people look the same, specifically people from a certain social class that have the money to have this many surgeries," she says.

"What many sociologists have observed is that globalization — and the way American media has been exported to the rest of the world — has had a profound effect in the way people all over the world perceive beauty ideals."

Lebanese culture was not always this way. "In the past 15 years, the beauty ideal changed in Lebanon," makeup artist Hala Ajam says in The Illusionists. She roots this change in globalized economic forces, noting that the infiltration of Western celebrity culture has created an association between this idealized aesthetic and wealth itself. "All over the world, stars make money like crazy," she observes. "[People think] if they look like them it's a shortcut to being rich."

There's evidence that this rigid standard of beauty has been thoroughly embedded in Lebanon's economy on multiple levels. Classified ads for jobs for women, for example, state that women "must be beautiful," Nadine Moawad of the Nasawiya Feminist Collective says in the film.

In order to meet such standards, special bank loans have been established solely for this purpose. Lebanon's First National Bank even lends individuals up to $5,000 for these procedures, according to CNN.

Ultimately, meeting a rigid, Western standard of beauty is equated not only with wealth, but also with happiness. Lebanese people have come to normalize this standard as "important for their improvement, for their career, in their life to build up friends, to become more successful," Maher Mezher of Lebanon's First National Bank explains in the film.

Whereas eating disorders were "negligent" in Indian culture as recently as the 1990s, Indian psychiatrists have noted that in the past decade, the number of Indian women suffering from anorexia nervosa has increased between five and 10 times and it is impacting women at younger ages, according to The Times of India. Indian psychiatrist Rajesh Sagar points to the rise of Westernized media as a major contributing factor.

Ruchi Anand, American Graduate School professor of International Relations, agrees. He says in The Illustionists: "Now what we're seeing is a trend toward an imitation of the Westernized body image. These girls literally are fighting for the size zero, which was never known as beautiful in India."

Author, filmmaker and activist Jean Kilbourne observes in the film that countries that once valued voluptuous female figures, like India, see changing norms once Western media proliferates within their borders. "Wherever American popular culture goes, the public health problems that are associated with it follow," she states in the documentary.

How to fight back: While it's crucial to remember that negative body image is partially rooted in the global process of capitalism, individuals still have the power to fight back. "If tomorrow women all over the world looked in the mirror and if they liked what they saw reflected back at them, then we would have to reshape capitalism as we know it," says professor and activist Gail Dines in the film. "If you take away that self-loathing that women have, then you will see industries all over the globe go bankrupt." She adds that we could end the system that exploits, manipulates and seduces women into hating themselves "as a way to generate astronomical profits that keep a very few very wealthy."

"If tomorrow women all over the world looked in the mirror and if they liked what they saw reflected back at them, then we would have to reshape capitalism as we know it."

Rossini notes that in order to combat these forces, individuals can both limit mainstream media consumption and take to more democratized platforms, like social media. "Over the last few years, I've noticed a positive sea change in the way these issues are tackled," she told Mic. "Nowadays, a 14-year-old blogger can have a voice as loud as that of the CEO of a Fortune 500 company. A single tweet or blog post can go viral, provoking changes at the top in a matter of hours." But ultimately, she says, she would love to see "advertisers embracing empowerment as a selling tool instead of insecurity."

Hopefully that day will come soon. In the meantime, it's important to complicate the conversation we have about women and their bodies and work to remind the world that we are allowed to love our bodies the way they are.