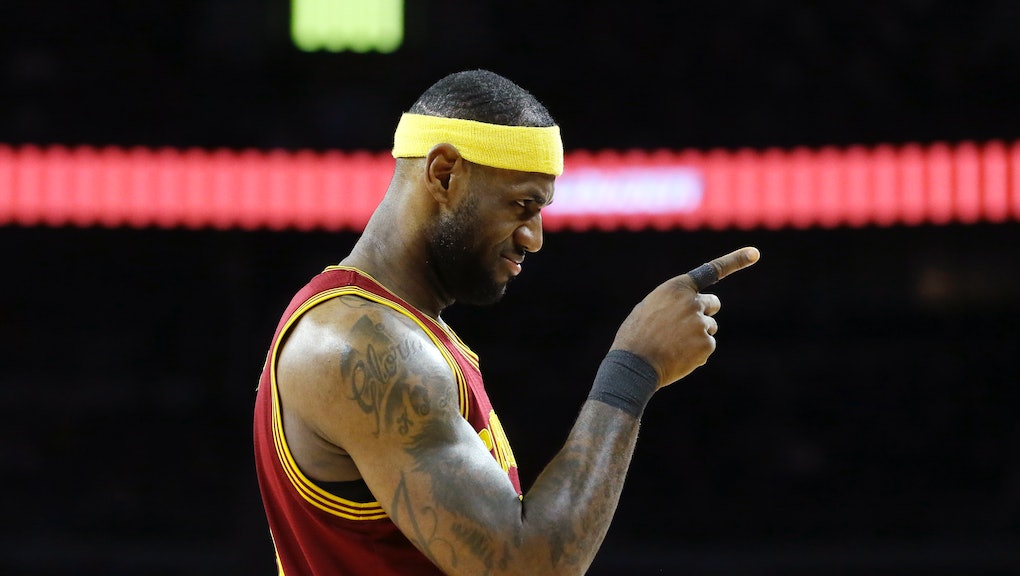 The Psychological Case for Talking in the Third Person

LeBron James has earned immense fame for how he carries himself on the court. He's also earned some fame, but much less praise, for how he talks about himself in interviews. The 6-foot-8-inch Cleveland Cavalier speaks in the third person, a tendency that has contributed to his being characterized as narcissistic, self-obsessed and detached from reality.

It's not surprising that James' habit of mentioning LeBron James turns people off. Typically, the use of the third person by individuals themselves, called illeism, is associated with egocentrics and oddball characters like rapper Flavor Flav, American Psycho's Patrick Bateman and Jimmy from Seinfeld. When most people talk about themselves, they just say "I."

Ethan Kross, a psychologist at the University of Michigan, doesn't believe speaking in third person deserves its bad rap. Kross studies self-talk, the introspective conversations we have with ourselves about ourselves. Through his research, Kross has found that people who don't refer to themselves in the first person during self-talk have an easier time dealing with stressful situations. Basically, treating ourselves as though we're other people can change how we think, feel and behave.

Kross has studied psychological distance for over a decade, but says focusing on non-first-person self-talk dawned on him a few years ago when he caught himself doing it. After running a red light, Kross blurted out, "Ethan, you idiot! Why did you do that?" Then he started to notice the behavior in other people, which got him thinking about the meaning and value of the language we use when we communicate with ourselves.

Kross explored this phenomenon in the lab.

In a 2014 study published in the Journal of Personality and Social Psychology, Kross and a research team explored how people use different styles of self-talk during stressful tasks. In two of the experiments, researchers challenged participants to deliver a speech with little preparation or help. Extemporaneous public speaking, Kross told Mic, is among the most powerful ways to induce stress in a controlled environment without crossing ethical lines.

Here are examples of first-person versus non-first-person self-talk from a writing exercise in the study:

First person: "I worry about giving a presentation to a customer at work. I am afraid that I will come across as unprofessional or not knowledgeable. I am nervous that they will ask questions that I will not know the answers for."

Non-first-person: "You worry too much about what other people think. You need to focus on what needs to be done, and what you can do to execute it. The simple fact that other people will be around does not change what you need to do. Focus on you, and you will be fine."

Additionally, researchers saw distinct trends emerge in the two groups during self-talk. The non-first-person group gravitated toward more positive messages — when addressing themselves by name or as "you," they built themselves up, like supportive friends do for one another before a nerve-wracking experience. Members of the first-person group, on the other hand, were harder on themselves and expressed more worry, shame and doubt over their speeches, both before and after they took the podium.

The public speaking experiment produced results consistent with the study's other experiments. Across the board, first-person group members got more worked up about stressful situations, performed worse in those situations and had more trouble bouncing back after the fact. Non-first-person participants, however, adopted more can-do attitudes and exhibited better self-control while under stress.

"The only difference in their behavior is that they're using their own names," Kross said of the non-first-person group, "But they start to build themselves up."

What does all the psychobabble mean? Most of us are better at giving advice to other people than to ourselves. By fine-tuning the language we use during self-talk, Kross believes we can gain enough emotional distance from our problems to become our own sages.

"When people are feeling anxious or stressed, they can try talking to themselves internally using their own names," he said. "Our data shows that when you do that, it enhances the ability to read more rationally into situations, which improves people's ability to control their thoughts, feelings and behavior under stress."

It's possible that LeBron James uses the third person to help him perform under stress, whether or not he's aware of the coping mechanism.

So far, Kross says his research specifically concerns a way of thinking, not speaking. Self-talk is an introspective dialogue with oneself. Inserting third-person references in casual conversation, Kross says, constitutes a slightly different phenomenon.

The line between speaking and thinking can become murky. Interviews aren't really two-way conversations; honest answers to thought-provoking questions may resemble deliberate self-talk more than mindless water-cooler banter. But there are instances in which conversational use of the third person clearly doesn't qualify as self-talk, e.g., the clip below of "Jimmy" from Seinfeld.

Kross says use of self-talk in different types of spoken conversation may represent a different phenomenon, but he doesn't have data to formalize the distinction. Still, he does pluck examples of self-talk from spoken interviews. When Mic mentioned Wikipedia's list of famous illeism-users is overwhelmingly male, Kross pointed to Malala Yousafzai's appearance on the Daily Show as an archetypal example of non-male self-talk. The relevant portion begins around the four-minute mark.

"While thinking about her answer, Malala switches into third-person mode — that's exactly the phenomenon we're studying in our research," Kross said. "She's female and I'd dare anyone to call her a narcissist."

It would indeed be hard to call the 17-year-old Pakistani education rights activist and shooting victim a narcissist, as people have LeBron James. The two public figures don't appear to share much in common, other than extraordinary achievements and, apparently, a penchant for self-talk.