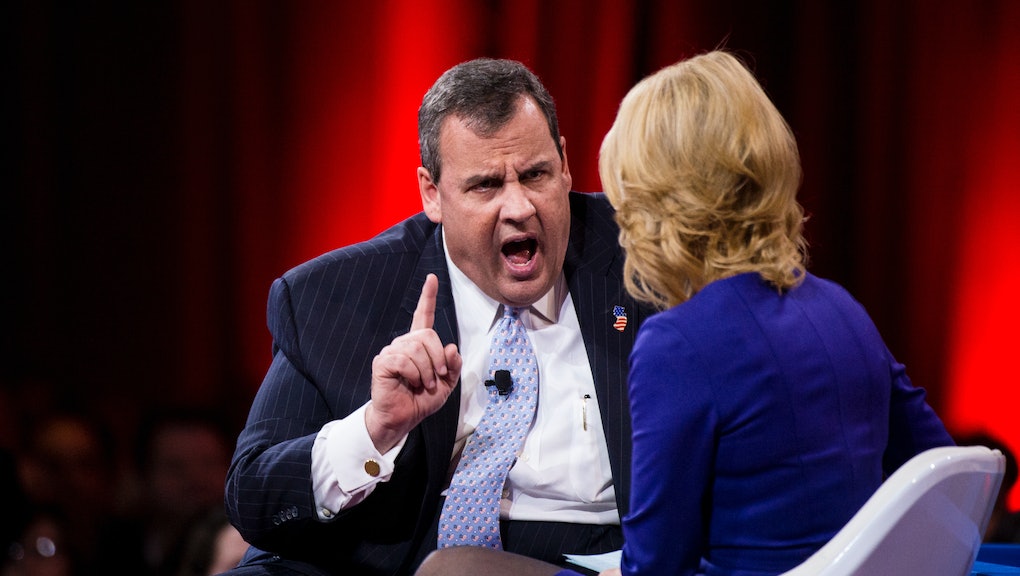 Everything You Need From Know About CPAC In 11 Ridiculous GIFs

After four days of fiery speeches and relentless politicking, the 2015 edition of the Conservative Political Action Conference has come to a merciful end — but not before delivering a warts-and-all look at the men (and one woman) expected to compete for the Republican party's 2016 presidential nomination.

The annual pow-wow crammed GOP leaders, right-wing activists and aspiring office-holders into the Gaylord National Convention Center in National Harbor, Maryland, for a long weekend of occasionally ramshackle debates over the future of conservatism in America. The paying audience tends to carry a serious right-wing bent, which makes the gathering a playground for deeply conservative characters like former Alaska Gov. Sarah Palin and Fox News host Sean Hannity.

But for politicians known to stray from the party orthodoxy, CPAC can be less welcoming. As former Florida Gov. Jeb Bush found out during his chat with Hannity on Friday, the crowds are quick to heckle anyone perceived to be lacking in conservative credentials.

In the end, Kentucky's libertarian-leaning Sen. Rand Paul, a CPAC favorite, won the conference's straw poll for a third straight year, earning 25.7% of the vote. Scott Walker, the ascendent Wisconsin governor, finished a strong second at 21.4%. Bush rounded out the top five with a respectable 8.3%, though there have been suggestions that he bussed in supporters in an effort to juice his numbers.

But CPAC is about more than candidates rallying the rank-and-file. Palin, who will not be running in 2016, closed the show on Thursday with a coherent speech about veterans' care. Another former governor, New Mexico's Gary Johnson, made an animated case for legalizing marijuana. And Michael Hayden, the former National Security Agency chief and a vocal supporter of government surveillance programs, was just about laughed out of the building when he declared himself "an unrelenting libertarian" during a Saturday event.

We laughed, we cried, but more than anything else, we learned a whole lot during CPAC 2015. Here are just 11 of the most important lessons:

1. Everyone at CPAC loves every little thing about Sen. Rand Paul (Ky.).

CPAC has long been the province of the Paul family. For years, it was Rand's father, former Rep. Ron Paul (R-Texas) who filled the convention's ballrooms and swept audiences off their feet. In 2015, though, it was all about the Kentucky senator with the deep libertarian roots.

Mostly, Paul focused on reassuring party hardliners that he wouldn't hesitate to start a war somewhere. (He's been accused of not being hawkish enough.) "For me," he told the adoring crowd, "the priority is always national defense."

But it was his criticism and subsequent call to action against the surveillance state that won the day.

Paul then celebrated and sought to capitalize on his latest straw poll triumph with a fundraising tweet.

Jindal came out with some harsh words for the GOP's elected leaders in Congress, but saved his toughest talk for "the left," a common and usually winning strategy for dozens of speakers.

Alas, Jindal ended the weekend on a sour note: He received just .9% of the vote in the straw poll, good for 12th place.

3. Sen. Ted Cruz wants Coloradans to go ahead and smoke that weed, because states' rights.

Speaking about the pending shutdown of the Department of Homeland Security, Cruz blasted his boss, Senate Majority Leader Mitch McConnell (Ky.), for trying to salvage a compromise by "cutting a deal with Harry Reid and the Democrats to give in on executive amnesty." During his turn with Hannity, though, he was surprisingly supportive of Colorado's right to legalize the recreational use of marijuana. Cruz said he didn't agree with the decision but respected the results of the 2012 voter referendum.

4. New Jersey Gov. Chris Christie is gonna fight for his right to yell at people in public venues.

Christie spent a lot of time ripping on the media, proudly declaring his distaste for the New York Times. When conservative radio host Laura Ingraham asked him about his lagging poll numbers, he asked pointedly: "Is the election next week?" Luckily for the New Jersey governor, it is not. He finished 10th in the polling, with just 2.8% of voting attendees checking his name.

It happened during an unscripted exchange after Walker's prepared remarks. Asked how he would deal with global security threats, like those posed by ISIS, the Wisconsin drew an odd and disturbing parallel. Here's the full context of his answer:

"I want a commander-in-chief who will do everything in their power to ensure that the threat from radical Islamic terrorists do not wash up on American soil. We will have someone who leads and ultimately we'll send a message not only that we'll protect American soil but do not take this upon freedom-loving people anywhere else in the world. We need a leader with that kind of confidence. If I can take on 100,000 protestors, I can do the same across the world."

No, Walker did not compare union protesters to ISIS, as many have suggested. But he did say that his experience in a tough political fight (and not, for instance, a unique military strategy) is what gives him confidence he could manage the war on ISIS. His office immediately sought to make this clear, and on Sunday he went on Fox News to "clarify" his remarks.

6. Former New Mexico Gov. Gary Johnson wants legal weed so bad he threw himself out of a chair.

Moments after anti-legalization zealot and U.S. Consumer Product Safety Commisioner Ann Marie Buerkle claimed that a person is more likely to have a heart attack in the hour after smoking pot, Johnson sought to ... well, it's hard to tell what he's trying to accomplish. Maybe it was his way of saying he'd gotten high in the past 60 minutes. Though that would have undermined his argument. Alas, watch him go!

It should be noted that Johnson is the CEO of Cannabis Sative Inc., a company that, per the Associated Press, "plans on selling medical and recreational marijuana products."

7. Former Alaska Gov. Sarah Palin thinks Washington should butt out of veterans' lives ... but also do more for veterans.

To be fair, Palin's speech was actually pretty reasonable. Palin's son, Track, served in Iraq. She spoke movingly about watching him leave: "When my son went off to war the first time, as a teenager, I was confronted with the same reality that all the other moms have to face, that's realizing, man, I wasn't gonna be there to help, to protect," she said, "Moms can't be there when they hurt. I could pray; and I did; and I do. But few things are more difficult than to kiss a child goodbye, off into harm's way, knowing that you're not going to be able to be there to protect."

She also reminded the crowd that, in the course of the four-day conference, more than 90 veterans would commit suicide. (Having said that, she also made a strong case for more forceful engagement with real and perceived enemies on the battlefield in Iraq and Syria.)

8. Sen. Marco Rubio (Fla.) thinks we are exceptional — except when we're not.

"Exceptional," but only up to a point. He also said the U.S. is in "decline." But that it could be fixed by, wink wink, a good new president. To be clear, Rubio does not think that person is Hillary Clinton. Asked about her during a post-speech Q&A game of word association, he said: "Yesterday."

9. Former U.S. Ambassador to the U.N. John Bolton wants to talk a little more about Benghazi.

Bolton spent most of his speech ranting about Hillary Clinton, who was secretary of state during the deadly attack on the U.S. outpost in Libya. Bolton warned the audience to "not ever forget Benghazi." Judging by the crowd reaction, there is little doubt they will.

Trump, as one might expect, said a lot of weird things. But his most memorable riff centered on his plans for dealing with ISIS. "I'd just hit 'em really hard," he told Hannity during their Q&A. He also said he'd "find" a general to implement to put into practice the following instruction: "You gotta hit 'em hard, you gotta hit 'em firm and you can't play games. You gotta go hard and fast and firm." Hard and fast and firm. Trumps's support among attendees was a bit squishy; he finished 8th in the Saturday poll with 3.5% of the vote.

They didn't laugh, but 4.3% of the CPAC crowd saw fit to give the former Pennsylvania senator and career presidential candidate a nice political boost. He finished the straw poll ahead of more mainstream figures like Rubio and Christie.