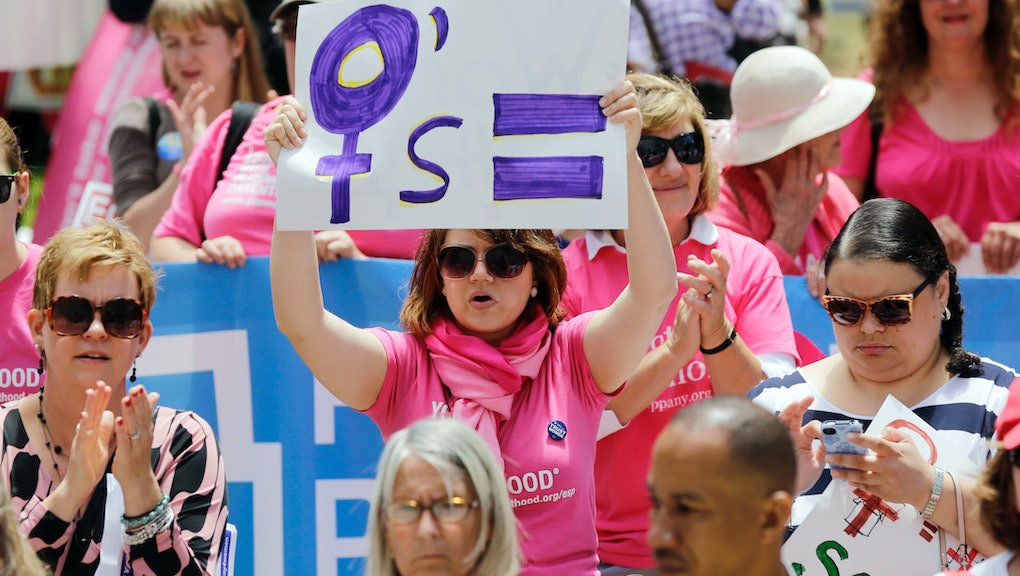 Women's History Month is meant to commemorate women's advancements toward equality. Yet while feminists have fought the good fight and created palpable change in our legal and social fabric, it's clear that the fight for gender equality under law remains under attack.

The "war on women" is, contrary to some conservative opinions, real and pernicious. From the gender wage gap to skyrocketing incarceration rates, women, especially women of color and transgender women, are consistently denied their fundamental civil rights as Americans and as human beings.

Arguably this downslide began around the same time as the start of the Millennial Generation, with the failure, in 1979, of a majority of states to pass the Equal Rights Amendment, which the Supreme Court then struck down in its National Organization for Women v. Idaho ruling in 1982. Without this constitutional amendment ensuring gender equality on a comprehensive, systemic level, we're not likely to attain the "equality of rights under the law" for all genders other than through piecemeal legislation, like the Lily Ledbetter Fair Pay Act, which allows women to sue for pay discrimination rather than lawfully demand pay equality, or Title IX, which singularly addresses gender discrimination on college campuses.

If anything, Women's History Month should make feminists and civil rights activists furious about the continued degradation and erasure of women's rights. What can we celebrate if our historical achievements are in danger of being reversed? What, in other words, does it mean when the 1970s feel more progressive than the 2010s?

Here are some ways women's rights have been stifled since the birth of our generation:

1. The steady chipping away of reproductive rights

Because of the complexity of the Supreme Court's Roe v. Wade verdict, which federally gives women the right to seek an abortion within their respective state's law about when human life begins, reproductive rights have been continuously chipped away at the state level in recent history — from the Court's Hobby Lobby decision to the closing of abortion clinics to the proposed 20-week abortion ban legislation. Indeed, NARAL found that 27 anti-choice state measures were passed in 2014, and a whopping 38 federal bills have already been introduced this year.

"Congress hasn't passed a law actively protecting abortion rights since 1994," Emily Crockett notes in RH Reality Check. While Democrats are trying to counter this fact through tactics such as the proposal of the 21st Century Women's Health Act just this week in the Senate, the new Congress' intention to roll back reproductive rights has women's rights advocates worried about the future.

Women's bodies are a legislative battleground on another front too, with the Supreme Court's decision to hear the case against the Affordable Care Act. If repealed by the court, women's access to free and affordable health care could be even further jeopardized.

It's disheartening when one of the most politically revolutionary moments over the past month was actress Patricia Arquette's call for equal pay during her acceptance speech at the Oscars. To recall President Barack Obama's quip in his State of the Union address about the persistence of the wage gap, "Really. It's 2015."

The fact is, there is still no law mandating equal pay for equal work. What's more, the gender wage gap becomes exponentially worse when a woman is also a person of color. According to the American Association of University Women, white women earn 78 cents to men's dollar, but black women only earn 64 cents to men's dollar. Hispanic and Latina women earn even less at 54 cents.

Without a federal law mandating the end of such wage discrimination for women, it's unlikely that advocacy against it will become anything other than political rhetoric, even as economists tout that closing the pay gap would result in sizable growth to the U.S. economy.

3. The repeated failure of ENDA

Both the lack of wage equality and with the myriad glass-effects faced by working women (the glass ceiling, the sticky floor, the glass cliff) are a product not only of the lack of an ERA, but also of Congress' repeated failure to pass the Employment Non-Discrimination Act, or ENDA. This legislation, which would end job discrimination based on sexual orientation and gender identity, has been variously debated in both the House of Representatives and Senate for more than a decade, but to no avail. Just last December it failed again.

4. The repeal of the Voting Rights Act

The same year that the Supreme Court ruled in favor of marriage equality was the year it repealed Section 4 of the 1965 Voting Rights Act, the "provision of the landmark civil rights law that designates which parts of the country must have changes to their voting laws cleared by the federal government or in federal court," the Huffington Post reports. Doing so also rendered Section 5 effectively moot.

These two critical mandates had ensured voting laws remained fair and nondiscriminatory, and numerous outlets documented how the repeal of Section 4 could negatively affect women and minority voters in elections. For women of color, the repeal could mean the added hindrance, bureaucratic and otherwise, of their civil right to vote, from being blocked at the polls to having to file needless government-issued identification paperwork. Some worry that voter ID laws, Maya Rhodan wrote for Time, put "an unnecessary burden on women. Name changes that may have come as a result of marriage or divorce ... may cause problems at the polls."

The injustice faced by CeCe McDonald, the trans woman of color who spent 19 months in prison after defending herself from a hate crime, illustrates the shocking police brutality that disproportionally affects women, especially women of color and trans women. "Stand your ground" laws have also reflected the frequently deep-seated sexism of our criminal justice system: Marissa Alexander, for example, was jailed for firing a warning shot against her abusive husband, while George Zimmerman was pardoned for shooting and killing Trayvon Martin.

"[T]he number of women in prison has increased at nearly double the rate of men since 1985," the Huffington Post reports. This affects women of color and trans women in particular, the latter of whom in particular are also subjected to sexual harassment and psychological trauma in prison. Referred to by some as the "prison industrial complex," this statistic exemplifies the continued systemic oppression of black and brown people.

The U.S. is the only developed nation in the world that does not provide paid maternity leave. While Obama proposed as much in his recent State of the Union Address, this lack of paid leave laws undermines women's advancement and security in the workplace.

As Rebecca Traister reported in the New Republic, "The Family and Medical Leave Act, currently the only federal leave protection available to American workers who have babies, does not require that an employer pay a new mother for a single day of leave; it merely protects her job for 12 weeks of upaid leave, and then, only if she has worked at her company for at least a year."

This, Traister observes, further debilitates women who seek to become mothers while also maintaining a career by the fact that "an American woman's earnings decrease by 4% for every child that she bears," she writes," which is "a figure that sounds even more brutal when compared to the fact that after men have kids, their earnings increase, on average, by 6%."

These are just a handful of ways women's equality has been repealed, stymied and challenged under the law. On top of all this, there are a number of other ways women face setbacks in society not legislated by the law, from street harassment and its metamorphosis into forms of online harassment, to college campuses refusing to acknowledge sexual assault and protect their students.

In this regard, we still have a long way to go. However, our raised, collective, feminist consciousness is taking aim and fighting back. As the National Institute for Reproductive Health reported, 2014 saw a "surge in the introduction, consideration and enactment of laws intended to increase women's access to sexual and reproductive health care."

But to prevent the stripping of women's rights and liberties, politicians must propose legislation that is proactive rather than reactive, and avoid bills that serve as band-aids. Until the ERA rises from the grave, feminist activism must be coalitional and attend to these issues at once independently and — across race, sexuality and gender expression — as one.