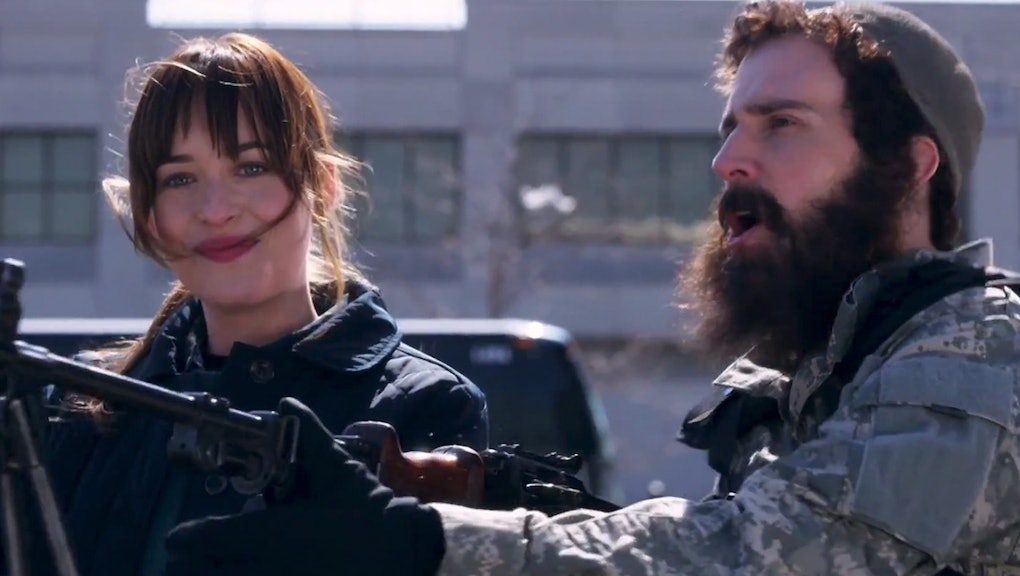 It's a scene we've seen a thousand times before: A nervous father drives his precious daughter to the drop-off point to say goodbye. Be it college, the army or a job in a new city, his little girl is off to bigger and better things in the real world.

Or, as this unexpectedly witty Saturday Night Live sketch from this weekend revealed in a twist ending, she's off to join the Islamic State group.

"Take care of her," the father (Taran Killam) says through barely contained tears as host Dakota Johnson climbs into the Islamic State recruiter's weapon-laden 4x4. "Death to America," a terrorist leader (Kyle Mooney) says before the truck careens away, complete with high-pitched ululations and machine guns firing into the air.

It's a very good sketch by modern SNL standards. The joke is funny enough to carry the whole bit, it doesn't drag on for too long and it's surprisingly edgy for a show that often feels tame. It's also a pitch-perfect parody of the "My Bold Dad" Toyota Camry ads, which feature a similar setup but with the U.S. military instead of the Islamic State group. Plus, the joke is timely: Just last week, three Brooklyn residents were arrested for their own incompetent plot to join the paramilitary organization in Syria.

Nonetheless, some people weren't too happy with SNL's decision to parody some of the world's most vicious terrorists:

If these people are really that offended the sketch, they'd better avoid any really gritty satire, like this Palestinian parody of the Islamic State mocking the group's inclination to murder random Muslims who can't remember Quran verses correctly or this Israeli sketch showing "bloopers" from an execution reel. (There's also the fact that SNL is parodying the Islamic State group's own over-the-top propaganda, which puts Michael Bay's editing team to shame.) But there were enough aggrieved people on Twitter to fill an anguished New York Post article about it, so that's something.

Killam defended the sketch online, pointing out that "freedom to mock is our greatest weapon" and thanking the sketch's nameless writers:

If SNL were this controversial more often, it could become an even more relevant form of satire that takes harsher jabs at current events, the way the Daily Show or Last Week Tonight so often do. Here's to more uncomfortable, biting satire like this from the show's writers in the future, and a reminder to the haters that playing it safe is rarely funny.