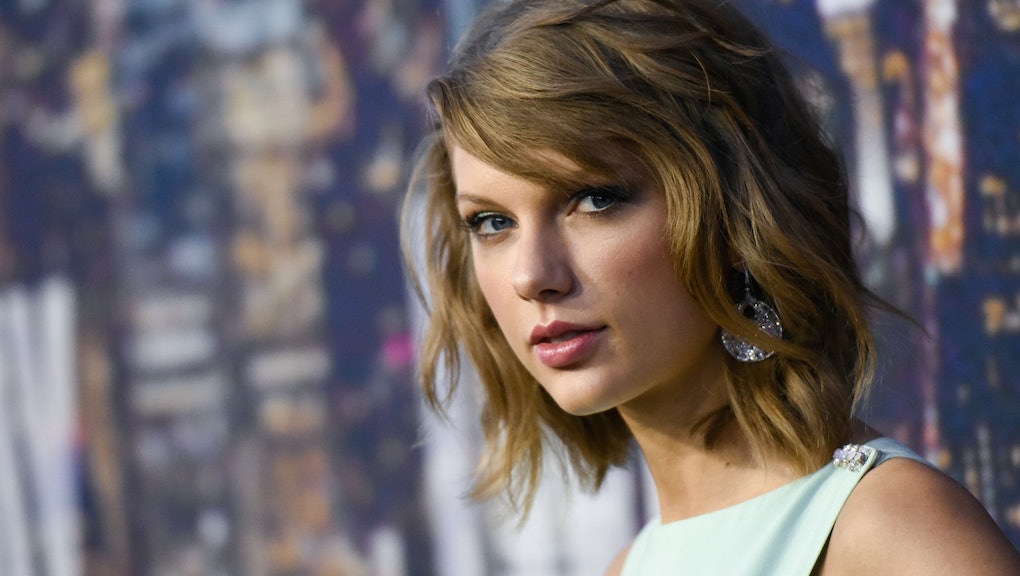 Sometimes, you just don't want to be dating anyone.

That simple truth, evident to all 20-somethings (especially those who have swiped through Tinder), should be widely accepted. Yet simply not dating, especially when you're "in your prime," is too often considered a second-rate, pitifully involuntary alternative rather than a first choice.

In her latest interview, Taylor Swift reminded everyone that not dating, even when you can, is in fact a choice. "I'm in a different place in my life, where love isn't really a priority," Swift said in a recent interview with the Telegraph:

Ask her what the tape looks like if you fast-forward five years and she seems less certain. "I'll be 30," she gasps. "I'll probably still be single, let's be honest. [...] I don't know what's going to happen if I'm ever content in a relationship — no idea how that's going to work," she continues, still smiling. "I don't even know if that's possible with the life I have.

"I used to think it was important to find a boyfriend," Swift added. "But I don't feel that it is now. I just want to have as much fun and as many adventures as possible."

Single, content with the idea of staying single and smiling about it? What a concept.

Just not feeling it: We can all relate to the "I actually don't want someone right now" feeling. Dating, particularly in an age of constant texting, fading ghosts and stuffed OkCupid inboxes, can be exhausting. Being career-focused can contribute to the feeling, as does having friends who fulfill us in other important ways. (It's no coincidence that Swift, off the serial dating train, has filled her life with a pack of high-profile BFFs.) Moreover, studies have shown that millennials take a less goal-oriented stance to dating, valuing family and kids above marriage itself.

And yet actively not dating still prompts questions and curiosity — Are you trying? Are you not interested? Are you just not looking in the right places? Are you sure I can't set you up?

Sigh. May we refer you to our spokeswoman, Taylor Swift?

Young and not in love: There are, of course, plenty of female stars who've spoken positively about the fulfillment being single brings their lives. But those tend to be older women, post-divorce stars or defiantly single 40-somethings finding new meaning in their single statuses.

Cameron Diaz has proudly spoken out against the stigmas "older" single women face, and Kate Winslet trumpeted her post-split single status as "empowering." Jennifer Lopez enjoys being single ... insofar as it helps her heal from her divorce. In short, singlehood is a status to embrace once you've tried your hand at love and given it a good go, having already proved you can settle down but just don't need to.

Yet choosing to be single when you're in your dating prime, before you've even had a Great Love under your belt? That's still seen as an unconventional, even ill-advised, choice. But honestly, sometimes you just really don't want to date. That makes being single a positive choice, rather than an unfortunate circumstance.

Embracing the solo life: "People will say, 'Let me set you up with someone,' and I'm just sitting there saying, 'That's not what I'm doing. I'm not lonely. I'm not looking,'" Swift told Cosmopolitan UK in October. "They just don't get it."

We never expected the ultimate girlfriend-to-the-stars to become the ultimate spokeswoman for singlehood. But with her unapologetic and clearheaded logic, Swift is describing the kind of single life so many of us have (or want). And turns out she's as good at it as she was at dating.