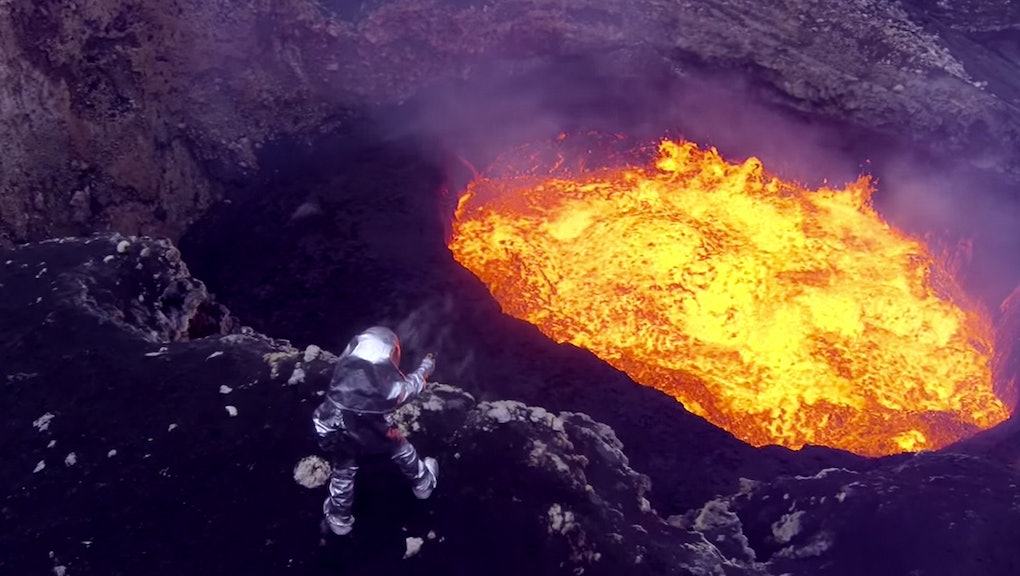 Someone Flew a Drone into an Active Volcano — And It's Incredible

There are few places hot enough to destroy a hovering drone. But thanks to explorer Sam Crossman, who outfitted drones with GoPro cameras and flew them over an active volcanic crater in Vanuatu, in the Republic of Oceana, we can experience the heat and power of boiling lava, toxic chlorine and sulfur gases firsthand.

The intense heat and smoke was too much for the drones, which were eventually destroyed by the volcano, but what they managed to capture before that is breathtaking. Take a look at the video published by National Geographic.

"It's a glimpse into the center of the Earth," Cossman says in the video. "It's like listening to the heartbeat of the planet. The physiological effects of being inside the volcano are significant in that you have every force down there trying to kill you."

Aside from capturing these stunning images and videos, the team's main mission objective was to learn more about microbial life in extreme locations and climates. The drones' main function in this respect was taking thousands of photographs to develop a 3-D rendering of the crater, which would give the scientists a better understanding of the local ecosystem. Of course, the videos are pretty amazing by themselves.

Though life isn't possible in the molten cauldron itself, "[t]he instant the rock cools to below about 120 degrees Celsius, it's considered an inhabitable environment," California Institute of Technology geobiologist and study participant Jeffrey Marlow says in the video. "Getting a handle on how microbes colonize this particular substrate is a good example of what will happen across the planet and has happened across the planet throughout geological time."

There are roughly 1,500 potentially active volcanoes on earth, about 500 of which have erupted since the beginning of human evolution.

It's daunting to think that at some point in Earth's past, much more of the planet was covered in such unstable surface conditions. But by increasing our understanding of these conditions and how life does eventually form in them, we can create a much fuller picture of our place in geological history.