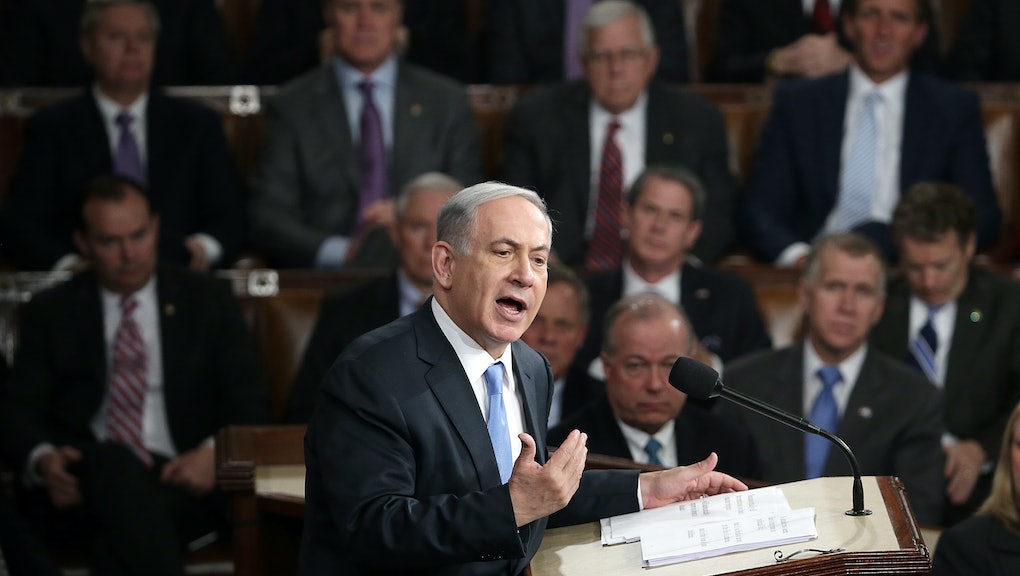 In a speech to Congress on Tuesday, Israeli Prime Minister Benjamin Netanyahu argued that the Obama administration's nuclear negotiations with Iran were misguided and that any agreement would ultimately doom the world to a "deadly game of thrones" with "zealots" on a "march of conquest, subjugation and terror."

"[The current framework] is a bad deal," Netanyahu said, attempting to undercut Secretary of State John Kerry's ongoing talks with Iranian officials. "It's a very bad deal. We're better off without it."

"The alternative to a bad deal," he suggested, "is a much better deal."

But he stopped there. Netanyahu never explained what a better deal might look like or attempted to conjure the outlines of a feasible alternative.

President Barack Obama soon dismissed the speech, saying from the Oval Office, "I did have a chance to take a look at the transcript, and as far as I can tell there was nothing new," according to a White House pool report. "The prime minister didn't offer any viable alternatives."

Rather than reset the terms of the debate, Netanyahu confirmed his critics' worst fears: that the Israeli leader was working not just to scuttle the current diplomacy, but also to promote a fundamental opposition to any kind of agreement that might normalize relations with an Iranian government he described as spreading "tentacles of terror" across the region.

"Before lifting those restrictions, the world should demand that Iran do three things," he said, "First, stop its aggression against its neighbors in the Middle East. Second, stop supporting terrorism around the world.

His words were met with thunderous applause throughout the speech from members of Congress in the House chamber, led by the Republicans who invited him to speak behind the back of the Obama administration. More than 50 congressional Democrats boycotted the session, including Sen. Elizabeth Warren (Mass.), according to the Hill.

Obama scheduled a call during the speech in order to to discuss Ukraine with world leaders, per a schedule released by the White House. Vice President Joe Biden is in South America, and Secretary of State John Kerry, who Netanyahu described as a "longtime friend," was pointedly absent, busy talking with Iranian diplomats in Switzerland.

At the end of his address, Netanyahu pointedly warned that "even if Israel has to stand alone, Israel will stand" — a clear suggestion that his government would consider unilateral action against Iran if the U.S. balked. Before the speech, Iranian Foreign Minister Javad Zarif told reporters that the Israeli leader was "trying to create tension and conflict" with his speech. If that was the goal, then Netanyahu scored a terrific success.

The reaction: Netanyahu began his speech by expressing "regret that some perceive my being here as political."

"That was never my intention," he said. But his words and the real-time responses from both Democrats and Republicans fell along stark party lines.

Top House Democrat Nancy Pelosi (Calif.), who sat through standing ovations during the address, said in a statement after that she "was near tears throughout the Prime Minister's speech — saddened by the insult to the intelligence of the United States as part of the P5+1 nations, and saddened by the condescension toward our knowledge of the threat posed by Iran and our broader commitment to preventing nuclear proliferation."

By contrast, Republicans celebrated nearly every word from the prime minister's mouth.

In a statement released less than an hour after Netanyahu left the floor, Rep. Michael McCaul (Texas) described the speech as a "compelling argument for why the Iran nuclear deal is dangerous for the national security of both Israel and the United States."

Republican House members and Senators were unanimous in their support.

What happens now? Netanyahu's speech is unlikely to sway the administration, which has been working toward an accord for months. The backchannel discussions have gone on much longer. Secretary of State John Kerry is scheduled in Switzerland for the next three days, during which time intensive negotiations with his Iranian counterpart could lead to either a tentative deal or the agreement to extend the current deadline, which is just four weeks off.

Netanyahu's focus will now return to his own political future. His Likud party faces the prospect of losing its majority — and with it, Netanyahu's office — in the coming elections, set for March 17. As a political tactic, the decision to deliver Tuesday's speech despite the backlash might do more for Netanyahu at home than in the international arena. His approval rating with Americans has spiked since the controversy over his visit peaked. For Israelis made anxious by a series of high-level diplomatic rifts with the U.S. government, that information will only bolster Netanyahu's electoral case.

And that, in the final accounting, might be enough for the Israeli prime minister, whose recent actions have confounded some of the U.S. and Israel's most typically assured analysts. The rush to decode Netanyahu's arguments will continue long after he leaves the capital. Despite the desperate rhetoric, the real fight over whether Obama administration should cut a deal — any deal — with Iran has only begun to escalate.