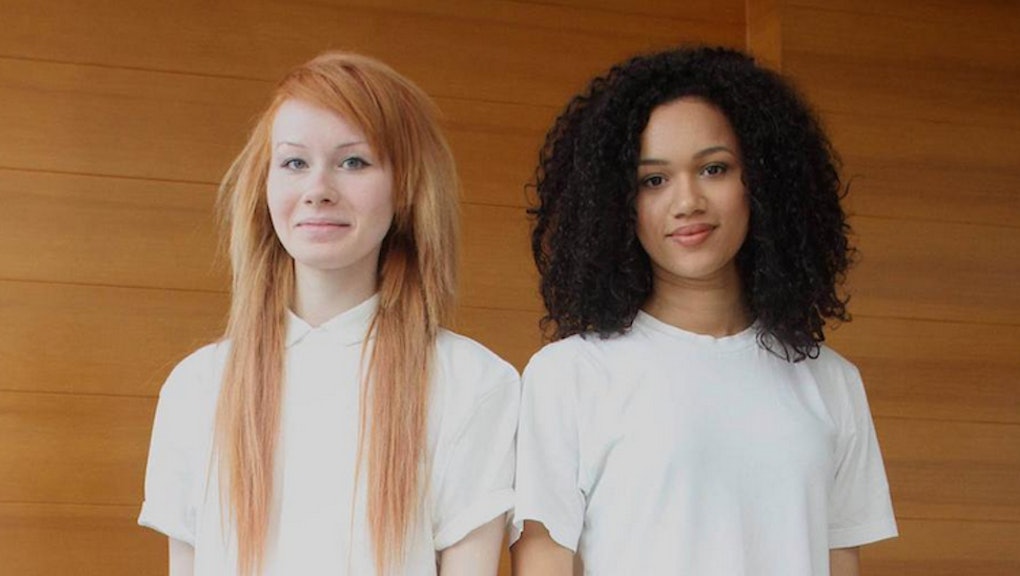 Meet Lucy and and Maria Aylmer, two 18-year-old women from the U.K. One has white skin and red hair. The other has darker skin and black, curly hair.

Lucy and Maria are twins. But because of their physical differences, a lot of people aren't buying it.

"No one ever believes we are twins," Lucy told the Daily Mail. "Even when we dress alike, we still don't look like sisters, let alone twins. Friends have even made us produce our birth certificates to prove it."

Even now that stories about their relationship have made international headlines, there's still a high degree of shock that it's possible for siblings not to share the same skin color. While it's interesting to see siblings who look little alike, the shock surrounding Lucy and Maria belies a deeper lack of understanding in today's society about multiracial identity.

First of all, such physical differences are entirely scientifically possible. Contrary to common misconceptions, multiracial couples can indeed have offspring with a range of skin colors. Such range is evident within the rest of the Aylmer family: The three older Aylmer siblings all have skin lighter than Maria's but darker than Lucy's.

As the Daily Mail notes, the Aylmer twins were born to a white father and a half-Jamaican mother. Non-identical twins come from separate eggs, so Lucy and Maria were able to inherit different genes. The fact that people with Afro-Carribean heritage often have strands of European DNA (usually dating back to the slave trade) increases the chance of these individuals passing on a gene for light skin to their offspring.

Science aside, our fascination with the Aylmers is about more than mere curiosity. Interracial relationships are on the rise in both the U.S. and the U.K., with current trends suggesting a substantial increase in people who identify as multiethnic in the coming decades. According to the Telegraph, the number of people in the U.K. alone who described themselves as having "mixed" or "multiple" ethnicity nearly doubled from 660,000 to 1.2 million between 2001 and 2011, making it the nation's fastest growing ethnic category. In the U.S., the multiethnic population grew by 32% between 2000 (when the Census Bureau first allowed respondents to self-identify as more than one ethnicity) and 2010.

Yet even with multiethnic people becoming more visible in society, there remains a broad misunderstanding of who these individuals are and how they experience their racial or ethnic identities. From invasive questions ("What are you?") to demeaning monikers ("half-breed," "mutt"), these individuals encounter frequent indignities and microaggressions simply because their physical features keep them from easy categorization.

The Aylmer twins underscore the need to move beyond understanding racial and ethnic identities as static and singular, and more towards examining them along a spectrum of possibilities. It's also important to remember that despite what society might dictate about white skin or dark skin, we need to believe multiethnic people when they share who they are with the world.

"We are proud of the fact that we are each other's twin sister," Lucy told the Daily Mail. "Maria loves telling people at college that she has a white twin — and I'm very proud of having a black twin."