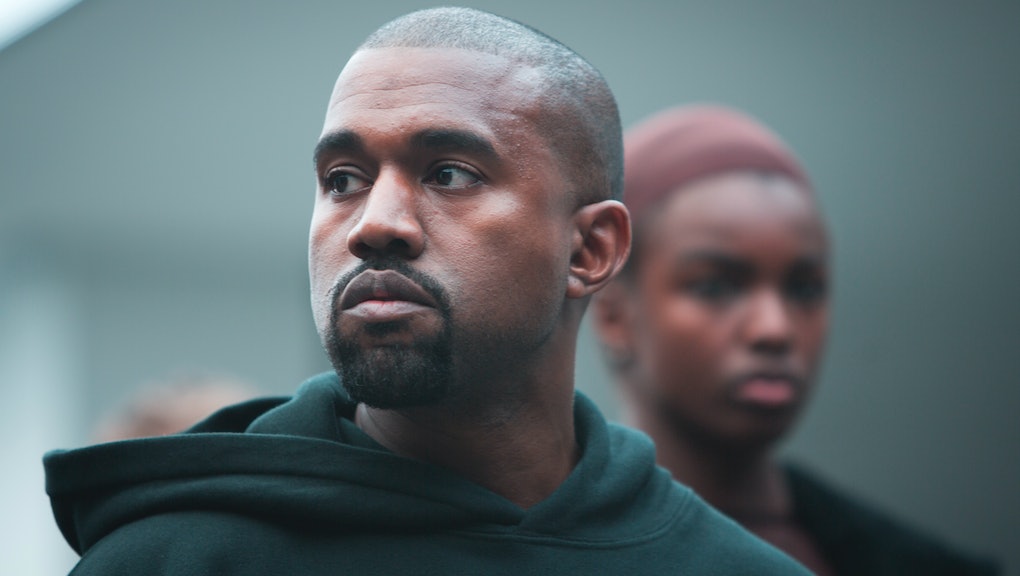 Kanye West spoke at Oxford University on Monday. In front of the Oxford Guild Business Society, which describes itself as the U.K.'s "largest and oldest careers society," he offered an audience of 350 future leaders a crash course in Yeezianity.

Kanye forbade phones and photos. He begged for quiet.

Then he got his stream of consciousness going, and he didn't disappoint. Here are some of his most memorable quotes. For the most ardent 'Ye fans, the full transcript can be found here.

"My goal, if I was going to do art, fine art, would have been to become Picasso or greater. That always sounds so funny to people, comparing yourself to someone in the past that has done so much, and in your life you're not even allowed to think that you can do as much. That's a mentality that suppresses humanity."

Kanye continued his glorious tradition of comparing himself to our culture's greatest artists. Previously he's compared himself to Michelangelo, Jean-Michel Basquiat, Walt Disney, Marina Abramovic and Andy Warhol. One has to have idols.

"We have the resources as a civilization to find a utopia, but we're led by the most greedy and the least noble."

Kanye has actually made this same point before, at Harvard University's Graduate School of Design. In that speech, he elaborated, saying that our leaders were also "the least tasteful, the dumbest and the most political." That's why he makes no efforts to be a politician: "I'm usually at my best politically incorrect and very direct."

"I approach creativity like a sport, where if I have a drawing, I react just like a jock: Look at the fucking drawing right there, yeah!"

This is actually a fitting and insightful way to interpret Kanye's ravenous enthusiasm. He is "the Michael Jordan of music" and "the LeBron of rhyme" after all.

"The Matrix is like the Bible of the post-information age."

Kanye didn't elaborate too much on this point. But comparing The Matrix to the Bible is a fruitful juxtaposition that many have made before.

"I compared it like, when the hundred guys come at Neo, those are opinions, that's perception, that's tradition," Kanye told the Oxford students. "Attacking people from every which angle possible... If you have a focus wide and master senseis like Laurence Fishburne and you have a squad behind you, you literally can put the world in slow motion." Make of it what you will.

"Time is the only luxury. It's the only thing you can't get back."

"If you lose your expensive luggage at the airport, you can get that back," Kanye clarified in the speech.

On ants versus crabs

It's not exactly clear which Kanye thinks is better. Probably ants, since — as philosophers as esteemed as Hobbes have pointed out — they work together so brilliantly as an organized, political collective. Kanye argued at Oxford that we're "all one family" and that we should work together. Crabs don't seem to cooperate like that. They're only good for eating.

"This is a generation that is far less racist – yes, small remnants remain of even thinking of calling something of a racial slur. White people that listen to rap say 'nigger'... in the privacy of their own home."

Racism is alive and well in the United States, and there are far more pressing examples of it than West's theoretical white at-home rapper. But Kanye says there are a lot more -isms to fight back against: "What about elitism, what about separatism, what about classism?"

Kanye's rage against Grammy voters continues. Despite his valorization of the Nobel Committee, the Nobel Prize has also gone to some questionable recipients in its past, just like the Grammys.

This has been an ongoing theme in many of Kanye's interviews of late. He mentioned it last week with Zane Lowe. Kanye is disappointed that his Adidas collection is going to debut with a high price tag, keeping him from seeing the whole world in Yeezy gear. "Eventually everybody who wants to get Yeezys will get Yeezys," he said in February.

"One of the most memorable things about [My Beautiful Dark Twisted Fantasy] was Nicki Minaj, and the fact that she kicked my ass, on my own song, on one of the best albums... of the last 25 years... To come back and deliver my magnum opus of a work, and to be outshined ... to be beat by a girl, basically."

Nicki Minaj's verse on "Monster" was one of the most surprisingly vicious moments on My Beautiful Dark Twisted Fantasy. It's pretty admirable that Kanye went out of his way to acknowledge it. He's been doing a good amount of that lately. He recently honored Drake for being "the hottest rapper in the game" right now, and apologized to Beck and Bruno Mars for disrespecting their artistry in the past.

"One of my biggest Achilles' heels has been my ego. And if I, Kanye West, the very person, can remove my ego, I think there's hope for everyone."

This may be the most egotistical, non-ego-driven statement ever made — the kind only Kanye West could pull off.