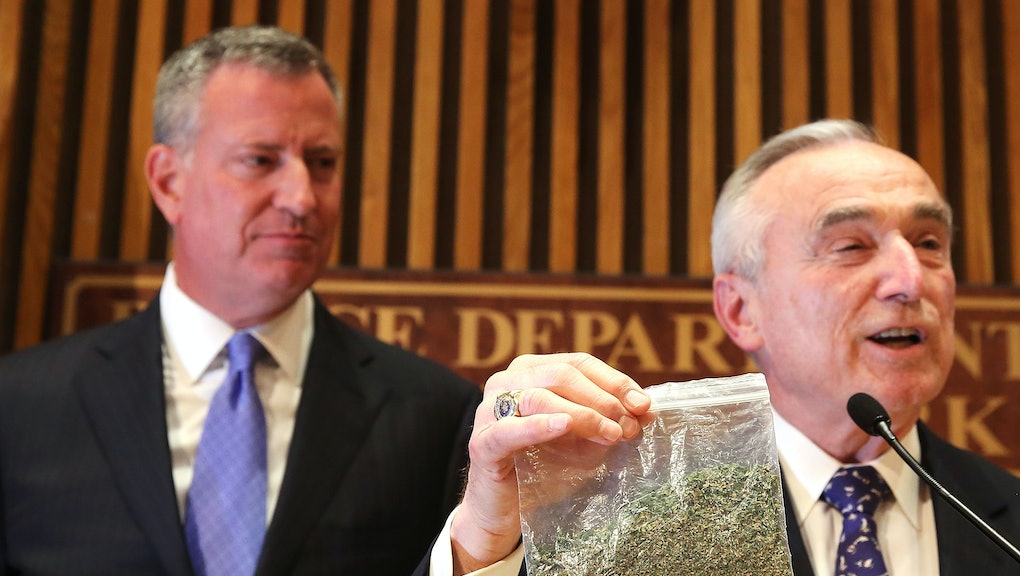 NYPD Commissioner Accidentally Made a Great Case for Marijuana Legalization

During a press conference Monday, New York Police Department Commissioner William Bratton said shootings have increased by 17% so far this year compared to the same period last year. According to Bratton, this increase can be blamed squarely on one thing: marijuana.

"The seemingly innocent drug that's been legalized around the country. In this city, people are killing each other over marijuana more so than anything that we had to deal with an '80s and '90s with heroin and cocaine," Bratton said during a press conference Monday, according to WABC.

"We just see marijuana everywhere when we make these arrests, when we get these guns off the streets ... In some instances, it's a causal factor. But it's an influence in almost everything that we do here."

The only problem? Bratton's tenuous link between marijuana and murder isn't criminology, it's a talking point. The myth of the skyrocketing marijuana-fueled murder rate is not backed by the evidence, and in attempting to wield it, Bratton is unintentionally making a great case for marijuana legalization by highlighting the fact that there's nothing about the "seemingly innocent" drug itself that causes crime.

It's the black market in pot. It's not that people are getting high and shooting others; rather, people are shooting each other to control the substance's illicit market.

Chief of Detectives Robert Bryce added that marijuana was involved in a number of drug-related thefts that turned violent. "These are all ripoffs," he commented. "These are not turf battles. These are ripoffs of marijuana dealers, robberies."

"If, indeed, there is violence in the illicit marijuana marketplace between those who are selling marijuana, there is one very basic and smart way to solve that problem: end marijuana prohibition," Gabriel Sayegh, Managing Director of Policy & Campaigns for the Drug Policy Alliance, said in a statement. "Prohibition is the absence of control, and by legalizing and regulating marijuana, we can regulate the marijuana marketplace."

Sayegh's position is backed by strong evidence. In Colorado, where recreational marijuana is now legal, the Drug Policy Alliance reports that Denver's violent crime rate decreased for the first 11 months of the year in a row. A paper published last March in PLOS One found that liberal medical marijuana laws may actually be associated with modest decreases in rates of certain kinds of violent crime, such as homicide and assault.

"While it is important to remain cautious when interpreting these findings as evidence that MML reduces crime, these results do fall in line with recent evidence and they conform to the longstanding notion that marijuana legalization may lead to a reduction in alcohol use due to individuals substituting marijuana for alcohol," the researchers wrote.

Why you should care: Bratton isn't just doubling down on weed, he's completely ignoring that there have been any shifts in public opinion or experts' views on marijuana at all. Over half of the country agrees marijuana should be totally legal, according to Gallup polling. Unfortunately, this rant about the marijuana market could be straight out of the 1980s, or for that matter at any point in the War on Drugs since President Nixon declared it in 1971.

Bratton can't blame the rise in murders on decriminalization, since his department actually arrested more people for possession in 2014 than it did the year before. If he wants to actually rid the city of murders over a couple hundred dollars' worth of pot, then the best option would be to legalize it altogether to wipe out the black market in weed.

Or he could launch NYPD reforms that rebuild the public's shattered trust in the NYPD, something that might actually improve public safety. But since he's firmly opposed to any reform at all, something says that Bratton will be blaming marijuana for every stray gunshot for the foreseeable future.