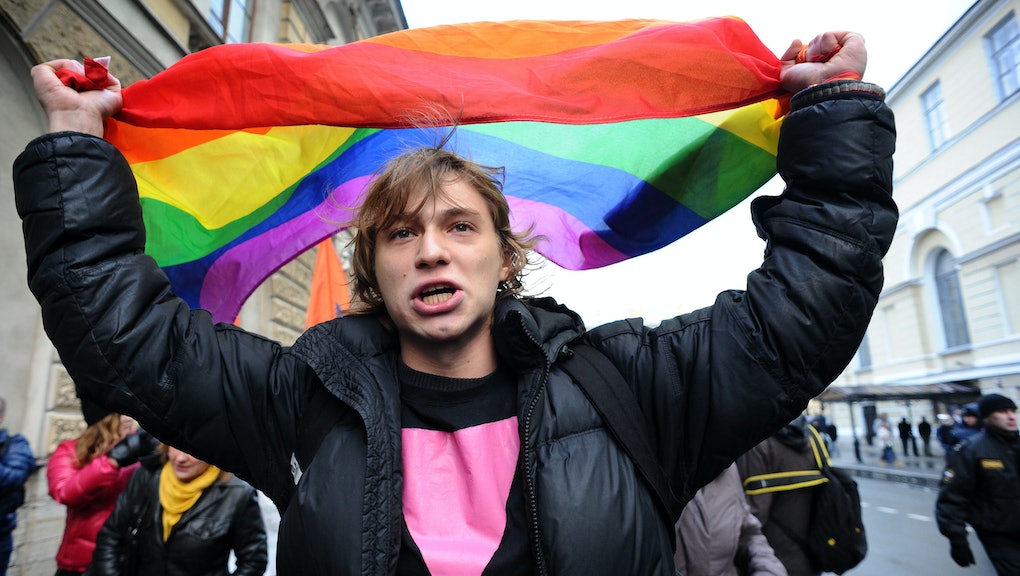 LGBT activists have another Russian problem to worry about.

Foreign Policy is reporting that in a move consistent with a 2013 law criminalizing "gay propaganda," the Russian government has formally demanded that U.N. Secretary-General Ban Ki-moon reverse a 2014 administrative order granting marital benefits to gay and lesbian employees of the United Nations.

According to Foreign Policy, Russian diplomat Sergey Khalizov alleges that "the U.N. chief's action violated a U.N. General Assembly resolution that left it to U.N. employees' governments to determine whether are eligible for spousal benefits." Russia is also weighing whether to initiate a vote in the budget committee to dismantle the order, which Foreign Policy says is being widely interpreted as an attack on Ban, whose willingness to denounce pro-Russian rebel leaders in eastern Ukraine is viewed by Russia as an attack on their interests.

Russia likely has two objectives: One is to please the reactionary elements of President Vladimir Putin's political base, helping distract from the ongoing Russian economic crisis that has seen the ruble fall to near-historic lows against the U.S. dollar, and increased scrutiny following the assassination of one of his primary opponents this week.

Given that in 2013 the Pew Research Center found that 74% of Russians view homosexuality as unacceptable in modern society and just 16% espouse pro-LGBT views, this strategy is effective and popular. The more Putin is seen as defending the core values of Russian culture against a Western hegemony that is both decadent and undeserved, the more secure his political situation. As Russia expert David Klion wrote in July 2014 for Al-Jazeera America, Westerners should be wary that Putin's primary objective isn't ideological but to protect his rule over "an impulsively governed, ideologically rudderless petro-state whose society is crumbling from within."

LGBT people are far from the only ones suffering thanks to this political cynicism, though they're often the Kremlin's easiest target. Klion wrote for Al-Jazeera America: "Beyond the Starbucks-studded heart of Moscow, Putin's Russia can be a dangerous place. Hate crimes by far-right groups are common, both against ethnic minorities (who make up nearly 20% of the population and may include as many as 11 million migrants from other former Soviet republics) and against LGBT Russians. Vicious young men have been known to arrange meetings with the latter on online dating sites and then torture them for sport."

Putin's other objective is to thumb his nose at the West and remind them that they can't simply ignore Russian influence on international politics, no matter how much their values diverge. International Gay and Lesbian Human Rights Commission executive director Jessica Stern told Foreign Policy that Russia "is looking for any excuse to curtail the U.N. secretary-general's authority. It's no secret that the secretary-general and Russia have been at cross-purposes over Ukraine and Syria, and the Russians have found the perfect political vehicle for attacking him."

Why you should care: If Russia's ploy is successful, it will have a serious and detrimental effect on LGBT U.N. employees around the globe. U.N. staff will be forced to pay the price for Putin's cynical willingness to use homophobia as a political tool. Given the United Sates' recent decision to create a senior State Department position to advocate for LGBT rights, it can and should attempt to stop this assault on the international gay and lesbian community.

It appears unlikely that Putin will yield to international pressure. Despite widespread international condemnation of the Kremlin's attitude toward gay rights, the Russian government has done nothing but march forward with its imposition of homophobic policies. It's a terrible situation with no immediate end in sight.