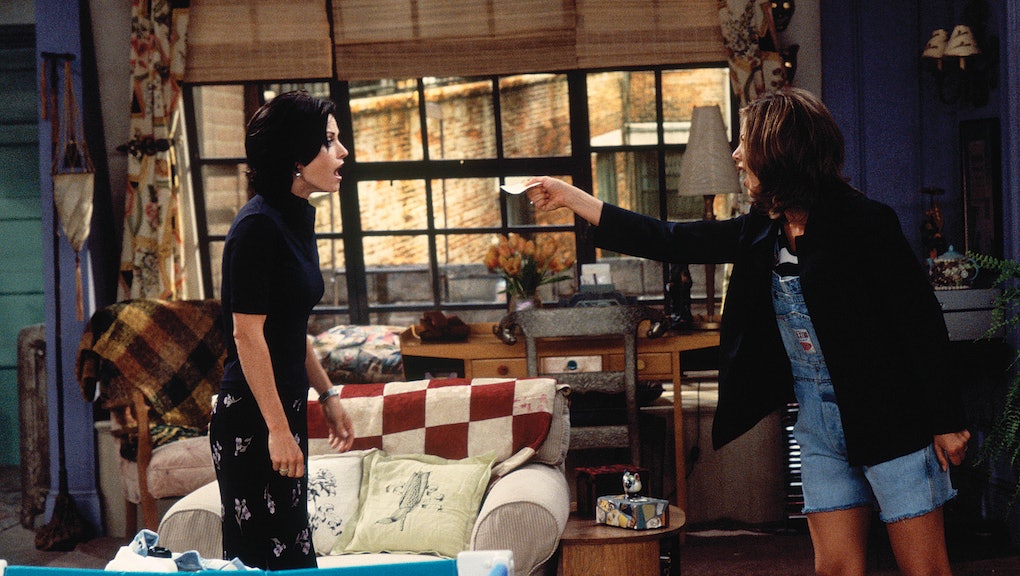 At first, we fought over the small things: the merits of certain HBO shows, the vegetable side for dinner, a tiny word choice. Then the bigger stuff: who's attractive, whose parents like you, who divulged a personal secret. Any time I was around this person, I felt like they weren't listening to me. Before I was about to see them, a wave of absolute dread washed over me. I felt like an imposter during every hug. The relationship just wasn't right for me.

It was a disputed electric bill that finally broke the camel's aching, gossip-fatigued back. I had to end it.

The problem was: She was my good friend.

A real breakup: We don't often talk about breaking up with a friend; for many, it's an unfamiliar concept. "The thought of taking a break from her had never occurred to me," Carey Purcell writes in Elle, explaining how it took her 15 years to ditch a bad friend. "We saw each other three or four times a week. We had so many friends in common. How could I not see her?"

But the need to formally end a friendship comes when we realize someone we confide in, trust and view as our support system simply isn't living up to those (admittedly) demanding expectations. "No relationship is perfect, but if a friend always leaves you feeling drained, it might be time to re-evaluate the friendship," psychologist Irene Levine, creator of The Friendship Blog, told Mic.

The problem is that ending a friendship doesn't come with the same roadmap ending a romantic one does. If we dump a bad boyfriend or girlfriend, society commends our strength and cheers us on; if we dump a friend, we become the bad friend ourselves.

But it's a roadmap we desperately need. Friendships are integral to our lives; how they function demonstrably impacts our wellbeing. Studies have shown that friendship has the positive power to increase our life span, help us heal from illness, even change our perception of how steep a hill is. Healthy friendships impact us psychologically, physically and emotionally.

So do toxic friends. Breaking up with a bad friend isn't just a relief; it is often necessary to our wellbeing.

Calling it: Surveys, like this one from the Huffington Post, have found that a majority of us have to end a friendship at some point, but it's rarely done with the same conviction nor accompanied by the same grieving devoted to romantic breakups. It often ends in unspoken ways (you just stop calling), with subtle hints (unanswered Gchats) rather than full-blown angry rants (in person or over email).

Beejoli, 27, chose the latter route. The writer was exhausted by the gossip and two-faced nature that accompanied her eight-year friendship with Alex. While it had its good moments, Beejoli never felt that the friendship added much value to her life. "It dragged on solely because she wasn't overly egregious, and also was perma-available on Gchat to discuss trivial boy problems, and honestly, neither of those are good reasons to be someone's friend," she explained to Mic.

The end came when Beejoli got in a fight with Alex and their mutual friend Reina, and Alex surprisingly decided to staunchly take Reina's side. "It finally gave me a reason to send the pair a scathing email dropping the friendship with them entirely ... It was the healthiest move I ever made," she said.

The element of "health" might be key. After I broke up with my friend of seven years, I felt like I'd finally severed the bruised limb that had been giving me a limp. "I'm sorry. I am done talking," I wrote over an email. I immediately felt better.

"Sometimes, the feeling is simply visceral: You feel uncomfortable and tense when you're together. You might even feel a headache," Levine said. "Friendships are voluntary relationships that thrive when they enhance our lives." When they don't, it can be best to cut the cord — something that's easier said than done.

Cutting the cord: Thanks to the constantly connected age of social media, friend breakups, just like romantic ones, leave a mess of loose ends. When I abruptly cut my friend off, I went with a conservative action plan: I unfollowed her on Twitter and Instagram and blocked her on Facebook. Dumping a friend can bring guilt — a fact supported by a 2012 University of Manchester study — so it felt best to remove the temptation for shallow reconnection: "Remember that house party in sophomore year?" or "Do you still have the number of that guy we met in France?"

Freelance designer Dianna, 27, was devastated when her friend of eight years started dating a married man and lost some of the qualities that had sparked the friendship. Though Dianna initiated the split, she said it's been a tough road. Fortunately, her friend isn't huge on social media. "If she were more active I imagine I would have had a harder time moving on," Dianna told Mic. "Facebook still thinks we're friends and suggests I tag her in posts. I'm always worried I'll accidentally click her name then die of embarrassment."

"The digital age enables us to never truly break up. We don't have to shut the door on anything," Maureen O'Connor writes for New York magazine. With this anxiety-ridden navigation of do-I-click or don't-I-click, friendship breakups are no different than romantic ones — if anything, their years-long trails can make them harder to digitally maneuver. The Internet a minefield of awkward encounters.

Splitting the friends: The awkward online overlap (would it be weird to "like" the group photo she's in?) extends to the real world, where a breakup can mean sacrificing old habits and haunts, like skipping the summer roadtrip or getting coffee at that little place on Seventh Avenue instead of Sixth.

It can also mean sacrificing other friends. A breakup "invariably reroutes the connections of a social network," Joshua Alston notes at AV Club, resulting in alienation from the larger group or certain friends lost. I myself stopped dead in my tracks when a friend announced how hurt she was that I'd cast aside our mutual friend.

"Women may not be able to talk to their friends, lest they be thought of as a 'bad friend,'" Levine said. "Men may have little patience and see friendship problems among women as 'catfighting.'" If people are frequently evaluated by the number and worth of their friendships, cutting ties with a friend can carry a social stigma.

That fear of being vilified for the friend-dump is real. Beejoli explains, "While I didn't feel immediately alienated by anyone I actually talked to and cared about, it felt like that whole group was now going to collectively go 'See, we were right to not be friends with her.'" Indeed, one Self magazine survey found 83% of women keep a toxic friend in their lives to simply avoid the daunting task of breaking up.

However, for Dianna, the social cut of her breakup was liberating. "I was finally free to pursue people I enjoyed spending time with. I didn't have to default to my ex-friend's friends," she explains. "There are a few of her friends who I think about from time to time, but the benefits of my revitalized social circle makes it worth the trouble."

Moving on: It's one thing to make a cathartic break; it's another to live with the decision of formally ending a relationship you hand-picked yourself. Like dumping a lover, a friend breakup can come with moments of regret when we feel like sending off apologetic texts like a digital tail between our legs.

"I think it's harder to get over a friend breakup, especially as an adult," Beejoli said. "For me there was a lot of 'maybe I was being too picky' ... with a friend, there's usually far longer a history and so much more goodwill."

Lack of societal recognition contributes to the difficulty. "There are legal and support systems in place for marital or romantic breakups," Levine said. "Because people often don't understand the depth of friendships and the hurt of the loss of a close friendship, there are few supports in place."

Dianna noticed the strange way people would look at her when she said, "I just broke up with a friend." "It was like they didn't understand the arrangement of words, then moved on," she said. "People don't like to talk about it, so I stopped talking about it ... I think about it more than I would like."

Finding ourselves: Friendships, like romantic relationships, are a choice we make — nice, polished, witty reflections of ourselves, forged with people who are hopefully able to help and make us better people along the way. Studies have shown that being ambivalent about that choice may make us more stressed and less healthy. When we choose to add people to our lives, the commitment needs to be genuine in order for the relationship to be truly beneficial.

That's why friendships are so gut-wrenching to break off, and why pruning toxic ones is so essential: Our friends are who we are.

As Lisa Gerber writes on Medium, sometimes the only force stopping us from cutting ties with a toxic friend is "our innate desire to be liked." Similarly, Beejoli said that, "In breaking up with [my friend], I was really breaking up with my need to be 'in.'"

Which is why friend breakups should be accepted and embraced. As a healthy last resort for a flailing relationship, they are as essential to our sanity and happiness as romantic breakups.

"I keep having this recurring dream where I run into her on the street and we talk like nothing happened," Dianna said. "I hate that dream because I'm always happy to see her. In reality it would begin a downward spiral."

*Some names have been changed.