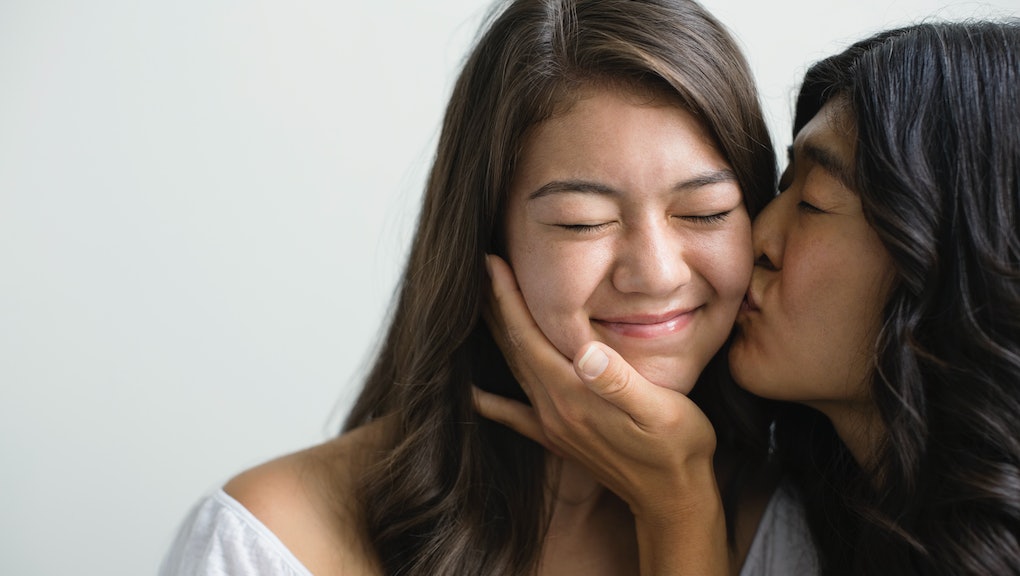 In a new video released by TED, entrepreneur Cindy Gallop, found of MakeLoveNotPorn, and sex ed teacher Al Vernacchio lament the awkward, shame-infused state of the current sex talk, especially given how much "kids these days" already know. Ironically, since kids are already so exposed, the "talk" can be an opportunity to reframe our attitudes entirely. As Gallop puts it:

"Our parents bring us up to have good manners, a work ethic, a sense of responsibility, accountability. No body ever brings us up to behave well in bed."

Gallop continues: "And they should, because sensitivity, kindness, generosity, empathy are as important there as they are in any other area of our lives and work, where we are actively taught to exercise those values."

Forget birds and the bees — that's what the "sex talk" can and should be about.

"Talking about sex is no different than talking about anything else — no matter how much you want it to be," says Vernacchio.

Which makes sense, given how often we think about it and see evidence of it. As Gallop and Vernacchio argue, sex is no different than other areas that require constant and respectful communication. In fact, a 2012 study in the Journal of Personal and Social Relationships found that apprehension about sexual communication negatively impacted sexual satisfaction.

That makes it more troubling than ever that social media outlets like Twitter, Facebook and YouTube ban sexual health information from their platforms, as reported by the Atlantic's Amber Madison. With currently only 22 states and the District of Columbia required to teach sex education in public schools in the U.S., it's more important than ever that we think of the sex talk as equally vital as any other conversations we have about relationships.

Flipping the script: A survey conducted by AVG Techologies in 2014 found that by the age of 10, most parents have given their kids "the talk" — that's five years younger than previous generations, a change likely due to kids' early exposure to sex elsewhere in their lives. But according to a Planned Parenthood survey, 50% of all teens still "feel uncomfortable talking to their parents about sex."

When BuzzFeed asked millennials to give an impromptu sex talk, many of the participants realized that how we approach sex talks not only can set the tone, but that such talks remain meaningful throughout our lives. As one participant said in their fake "talk" to their future kids, "Being comfortable with your sexual health and being able to express yourself sexually is a really important part of who you are as a person."

Take the advice from Gallop and Vernacchio: Positioning sex talks as ongoing conversations about making sex itself better is the only way to change the script about how awkward or uncomfortable they may be. That's good news for when we stare down these conversations in, say, 10 years.